Parveen Karambir Dingya has worked resiliently through the lockdown, believing that destiny will control his fate with respect to the virus 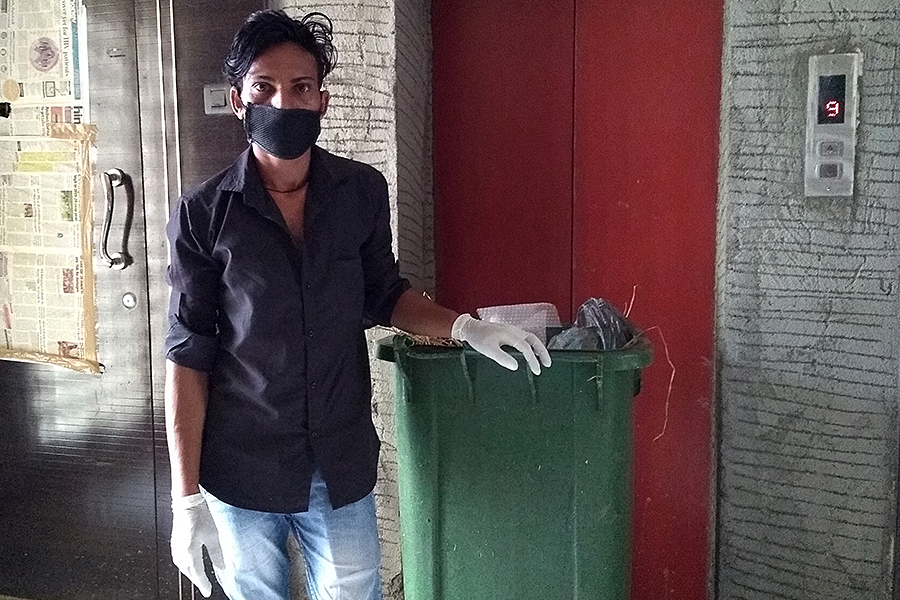 Parveen Karambir Dingya moved to Mumbai from Jind in Haryana seven years ago. A resident of Hari Om Nagar, he lives in a lane behind Hiranandani Hospital, Powai with his 21-year-old wife and two-year-old daughter. He turns up at this writer’s door at 8 every morning, come rain or shine, and collects garbage from the 110 flats within two wings of a co-operative housing society in Powai. Even during the lockdown, while the residents of the buildings were holed up inside their homes and barely even made eye contact with him while handing their garbage, 24-year-old Dingya was there, collecting garbage with his bare hands, a handkerchief serving as a temporary covering, before the building secretary decided to give him two masks and gloves.

Dingya is filling in for Pinky, the appointed garbage collector at the housing society. She had gone to her village at Kurukshetra in Haryana, and has been unable to return to Mumbai since the lockdown was imposed. Dingya starts his day at 5 am and walks to a towering building in the posh Hiranandani Garden s in Powai. Between him and a colleague, he first washes 20 cars. Next, he arrives at the housing complex to collect garbage. He starts with the four flats on the topmost floor and drops the trash in the bin before dragging the heavy bin to the lift and moving to the lower floors of the building. Before the lockdown was imposed, Dingya would manually separate the garbage and keep away things that could be sold to the kabadiwala for an additional income. But post lockdown, the society committee has laid down stringent rules and he has to leave for home immediately after leaving the garbage bins out on the road for the BMC van to collect, when they come later in the afternoon. A sanitiser bottle is kept outside the door of his 240-sq ft house. Dingya makes it a point to clean his hands and have a bath before having a meal of roti-sabzi and then playing with his two-year-old daughter. After a short snooze, Dingya returns to the complex at 4 pm to move the bins inside the complex, after the BMC van has emptied the waste. In a month, Dingya earns Rs 12,000 for garbage collection and an additional Rs 5,000 from washing cars. After paying a rent of Rs 6,000 towards his house rent and electricity, he is left with Rs 11,000 for his monthly expenses.  Ask him about Covid-19 and whether he is fearful of working under these circumstances, he replies in a matter-of-fact manner, “jo naseeb mein likha hoga wohi hoga” [what’s destined to happen will happen]. Maybe he is resigned to his fate. For the last 10 days, however, there was a new person showing up every morning to collect garbage. On asking, he informed us that Dingya is down with a fever, therefore unable to come. We wonder if it is the dreaded virus that has made him sick. However, on calling him, he assures us that it is the change of weather that has brought on the fever, and he would return soon.  After a break of 10 days, Dingya has resumed work. The word fear has no place in resilient Dingya’s lexicon.​   This is part of a daily series on how Covid-19 has upended the lives of essential workers across the country. Read more here