Don't call us heroes. We are victims: Workers who cross the 'Lakshman Rekha' daily

Unpaid salaries, unreasonable managers and entitled residents: A host of essential workers in Delhi say that despite not being infected by the virus, they are 'dying a slow death' every day 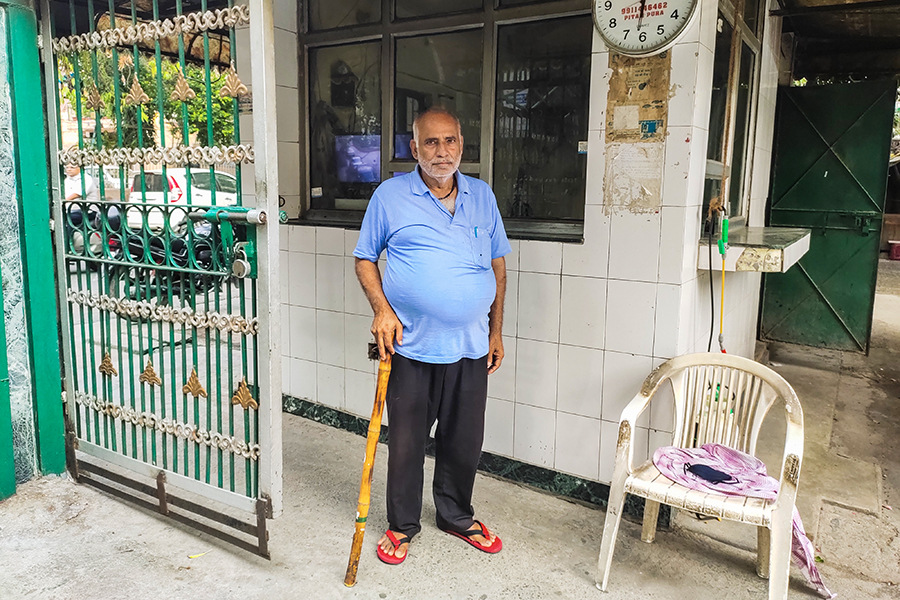 March 24. In his address to the nation announcing the lockdown, Prime Minister Narendra Modi exhorted people not to step out for 21 days. The fight was against the coronavirus, and the first step was to stay indoors. “This decision of a nationwide lockdown that has been taken today has drawn a 'Lakshman Rekha' at your doorsteps,” Modi remarked.

The next day in North West Delhi, Mohan Jha broke this ‘Lakshman Rekha’. Over the next three months, the 65-year-old repeatedly stepped out of his home in the evening. The ritual continued. And Jha was not alone. Pramod Kumar and Suresh Yadav too, threw caution to the wind, as did 28-year-old Sambit Seth, and young Prince Kumar, 17.

June 26. Parts of Delhi experienced strong winds in the afternoon, quite normal during the monsoon. Jha, who works as a security guard in one of the gated communities in Sector 9 of Rohini, struggled to reach work on time. He was 30 minutes late for his 6 pm shift. “I am sorry. My cycle broke down,” he apologised to the society manager, who was not amused. “Looks like you don’t want to work,” he howled. Jha kept mum. “You have been regularly coming late. It’s not acceptable.” The diabetic chowkidar didn’t utter a word. 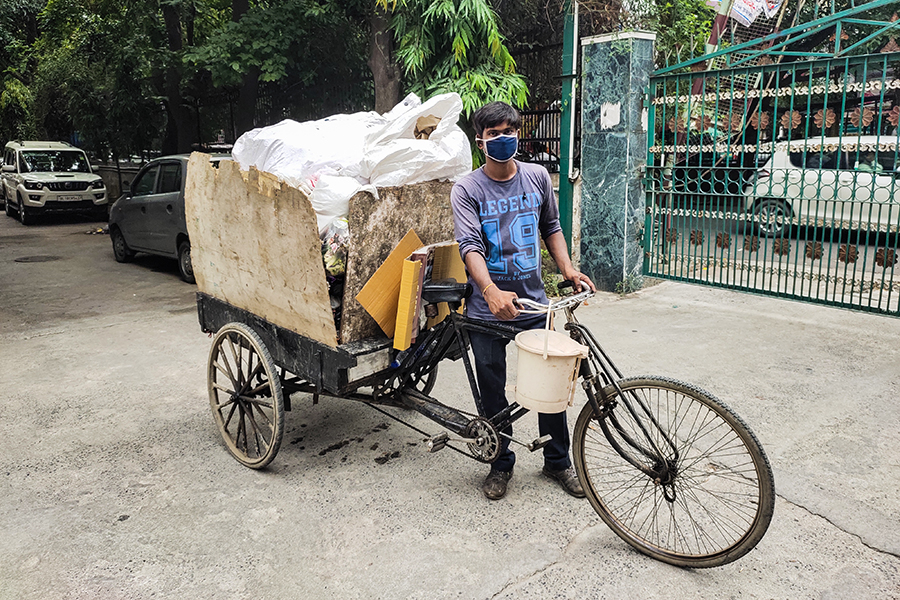 
Earlier in the day, Sambit Seth, too, had a dressing down, this time from residents for not collecting the garbage every day. “Why can’t you come daily?” asked one of the flat owners. “Isn’t this your job? Are you not paid for it?” asks the businessman who didn’t open his garment shop for a good three months. “You guys are used to free salary,” he kept barking. Seth remained silent. 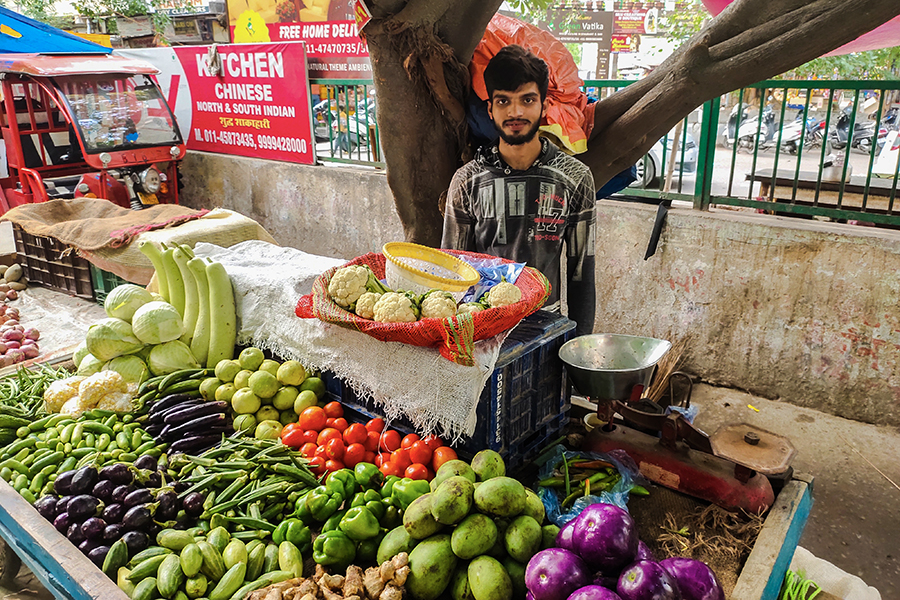 Outside the society, just 100 metres away, Prince Kumar has been selling vegetables since early March. His father died last December, and his mother has not been keeping well. Kumar has to take care of his younger sister and mother. “My day starts at 4 in the morning,” he says. It takes Kumar 40 minutes to reach Azadpur Mandi, Asia's largest vegetable and fruit market, where score of traders were infected with the virus in April and May. “I had to take the risk, or else I would have not survived,” he says.

Just 500 metres across the road, Pramod Kumar and Suresh Yadav are sitting in their rickshaws. While during the lockdown they didn’t go back to their villages in Bihar, post the unlocking phase, it has been a hard fight for survival. People are wary of using rickshaws and other modes of shared transport. 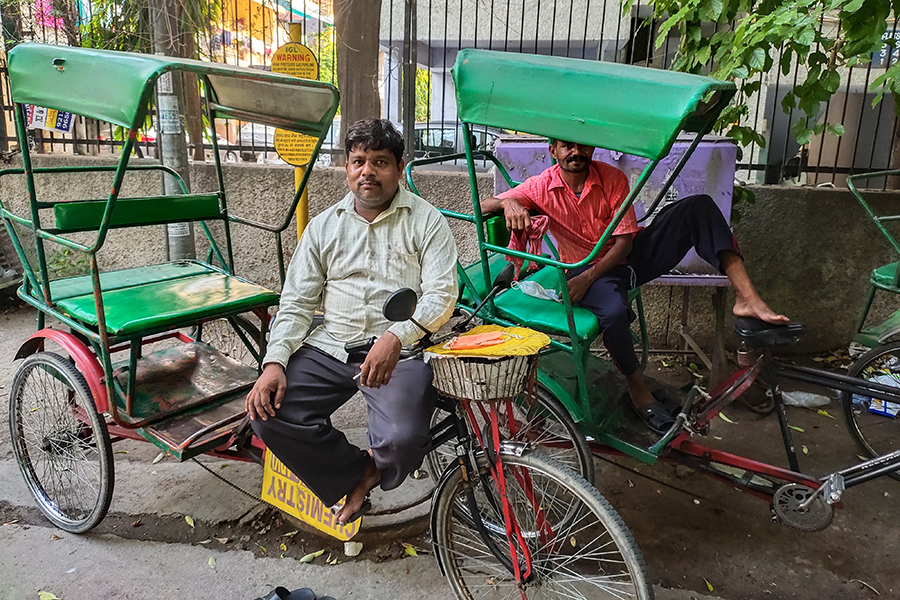 “Every apartment has at least one car in Rohini. They are rich people. Can’t they support a few of us for a few days?” asks Yadav. Suddenly, a Toyota Fortuna stops in front of his rickshaw. The man on the driving seat rolls down his window, and hands over a pack of biscuits. “Imagine, all that he can donate is Rs 10-pack of biscuit,” Yadav says.

When this reporter asked all four men for permission to click their pictures for this series—A day in the life of frontline heroes—they all agreed. But unanimously, they also expressed displeasure on the name. “Don’t call us heroes. We are victims of poverty,” says Jha, who has been working as a security guard for past 10 years. “While everyone remained inside their homes, I came to work every day. Did I have a choice? Who would have given me money?” he asks.

In spite of clocking in over 12 hours, and sometime working double shifts, Jha says he never gets appreciation, forget acknowledgment. “I don’t even get my salary on time. It’s just Rs 8,000,” he rues.

Seth, too, shares his plight. “There is no respect for garbage-pickers,” he says. “Everybody treats you like trash.” There have been days when residents would show their generosity by donating food. But that’s erratic. Ask him if things have changed after Covid-19, and Seth tells you what has not changed. “We are still treated as untouchables,” he says.

As Delhi overtakes Mumbai to become India’s biggest Covid-19 hotspot, thousands like Jha, Kumar, Yadav and Seth have also been fighting for survival. So far, they have been lucky, to not get infected by the coronavirus. “But we have been dying a slow death every day,” says Yadav, as he pedals away to his one-bedroom rented house late in the evening. Tomorrow, it’s the same day, and the same fight for survival.​