We like to be in control of our destiny. We like to be in a state where we believe that we can affect our future by our own actions. The dual triggers of the pandemic and the lockdown destroyed this feeling of control 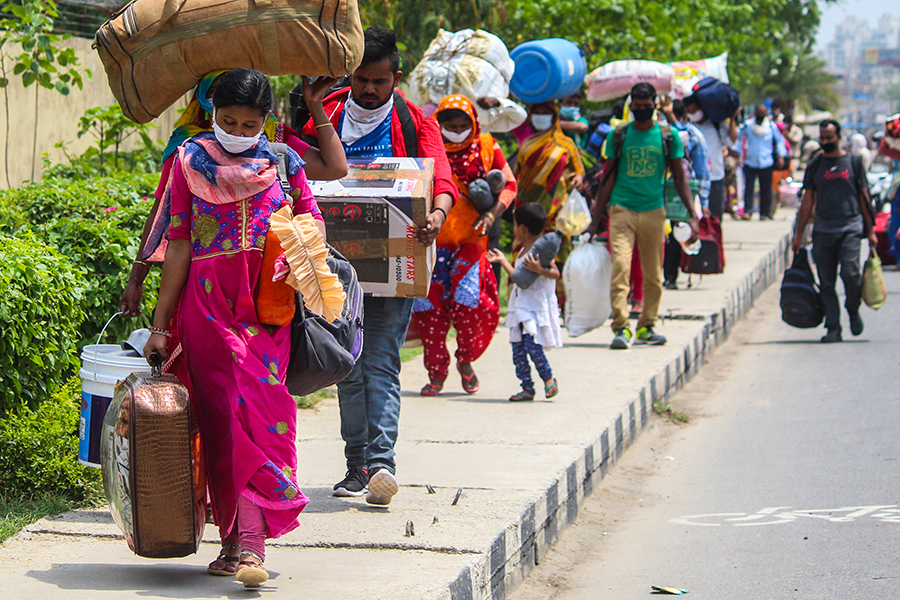 GURUGRAM, INDIA  JUNE 3: Stranded migrant workers head to a shelter home in Tau Devi Lal Stadium after they were turned back from boarding a special train as all seats were full, on June 3, 2020 in Gurugram, India. (Photo by Yogendra Kumar/Hindustan Times via Getty Images)
India entered into a complete lockdown on March 25 in response to the Covid-19 pandemic. Since then, we have witnessed the greatest migration of humankind in the Indian subcontinent after Partition. Men, women and children in the millions embarked upon 1,000-mile journeys on foot, pulling their belongings on their shoulders. Hundreds have died in inhuman conditions along these sense-defying treks. Much has been written about the circumstances leading to these suicidal missions but very little analysis has gone into the cognitive and socio-psychological aspects of it. It is imperative to understand the mental processes that led to these self-defeating decisions if we are to avoid repeating history. What were the migrant workers thinking?

What interventions could have possibly averted such a disaster? I outline below four psychological stages in the mass irrational response of undertaking these impossible journeys—aversion to ambiguity, loss of control, emotional contagion and social proof.

Aversion to ambiguity
Imagine a game with two jars. Jar A contains 100 marbles, 50 black and 50 red. Jar B also contains 100 black and red marbles, but in unknown proportions. If you close your eyes and draw a red marble from one of the jars, you win a thousand rupees. Which jar will you choose, A or B?

Playing again, only this time you will win if you draw a black marble. Which jar will you choose, A or B? In dozens of experiments, in what is called the Ellsberg paradox, most people end up choosing jar A in both the instances. A moment’s reflection will reveal how this pattern of choice is irrational. The reason though is clear. The first jar is risky but the second jar is worse, it is ambiguous. Ambiguity happens when information is known to be missing, causing multiple possible interpretations of the same context. This makes an appropriate response to the situation unclear. Dealing with ambiguity, in personal or professional life, is one of the leading causes of stress and anxiety. When faced with ambiguity, we tend to rely purely on our instincts while making decisions.

When the coronavirus crisis dawned on our consciousness, around early to mid-March, there were many unanswered questions. How dangerous is this virus? How long will it last? Fake news added to the confusion. There was real and present danger. Then, when the first lockdown was announced with four hours of notice, overnight the laborers faced loss of livelihood in addition to the threat of an unknown disease. It was the last straw. What could they do now? They had left their native villages, where life was tough but at least familiar, in search of work. Do they stay put (Jar B) or head home (Jar A)?

How could one reduce the ambiguity in this novel situation? Clear and transparent communication was not enough. What was critical was addressing the right issues in a timely manner. The Indian government communicated the need for social distancing and washing hands. In reality, social distancing was unachievable for the millions of migrant laborers living in cramped conditions. The much-repeated plea to work from home also did not apply to them at all. What the poor daily wage earner actually needed to hear were the precise measures the government was taking to address their plight. A clear policy on food, shelter and wages for the marginal worker, articulated with the lockdown announcement, would probably have reduced ambiguity and appeased the masses to a large extent.

Loss of control
We like to be in control of our destiny. We like to be in a state where we believe that we can affect our future by our own actions. The dual triggers of the pandemic and the lockdown destroyed this feeling of control. The daily wage laborer felt helpless and at the mercy of agents in the environment. Will the employer continue to pay me? Will the landlord evict me? The fear and anxiety from the ambiguity got compounded.

How could this loss of control be addressed at this stage? Securing the laborers’ place of stay by a strict temporary ban on evictions and a direct transfer of cash into their hands would have gone a long way in giving them back some degree of control. Instead, the issue of hunger was addressed by sporadic distributions of free food and easing the availability of subsidised food grains. While well intentioned, these actions only increased their feelings of dependence and made the loss of control complete. Transfer of cash would not only have boosted demand in the economy but would have also boosted the mental health of the disadvantaged millions.

Emotional contagion
Emotions are contagious too. We tend to mimic others’ emotions, often at a subconscious level, driven by verbal cues as well as non-verbal ones, like body language and facial expressions. This phenomenon is strong enough to show up even in social media interactions as demonstrated in a 2014 Facebook study. In the present case, fear and helplessness transitioned from the individual to the close-knit community through emotional contagion. This soon became a deluge and mass panic set in.

Fear and panic are as big a threat as the pandemic itself. There is no use appealing to the migrant laborers not to panic, as by now they have no control over their emotions. We simply cannot afford to let a crisis enter this stage. The only way to check it is by removing ambiguity and giving back control.

Social proof
Social proof or herd instinct is the action equivalent of emotional contagion. According to psychologist Robert Cialdini: “We view a behavior as correct in a given situation to the degree that we see others performing it.” What is surprising is how deep and powerful the influences of social proof can be.

Sociologists have observed that teens who hang out with others who smoke, do drugs or get pregnant, have a higher risk of doing the same. Called the “Werther effect”, there is evidence of suicide rates increasing dramatically, immediately after a highly publicized incident in the same geographical area.

As soon as news of the first laborers, heading home in despair started making headlines, social proof kicked in. So many, just like me, are going back. Maybe, I should too. The mass exodus is still continuing over two months since it started. At this stage, the only thing left for the administration to do is to ensure safe passage as far as possible.

And the only thing left for the country is to hope that history does not repeat itself.

(Disclaimer: The opinions are personal and do not reflect those of IIM Bangalore)

Tweets by @forbes_india
Covid-19 warriors: Fear has no place in this garbage collector's lexicon
Migrating to Cloud - In a 'Hybrid' way