2U: Ivory tower in the cloud

Long the domain of seedy degree mills peddling debt-laden vocational training, online education is now a priority, and a profit centre, at top-tier universities thanks to innovators like 2U Inc 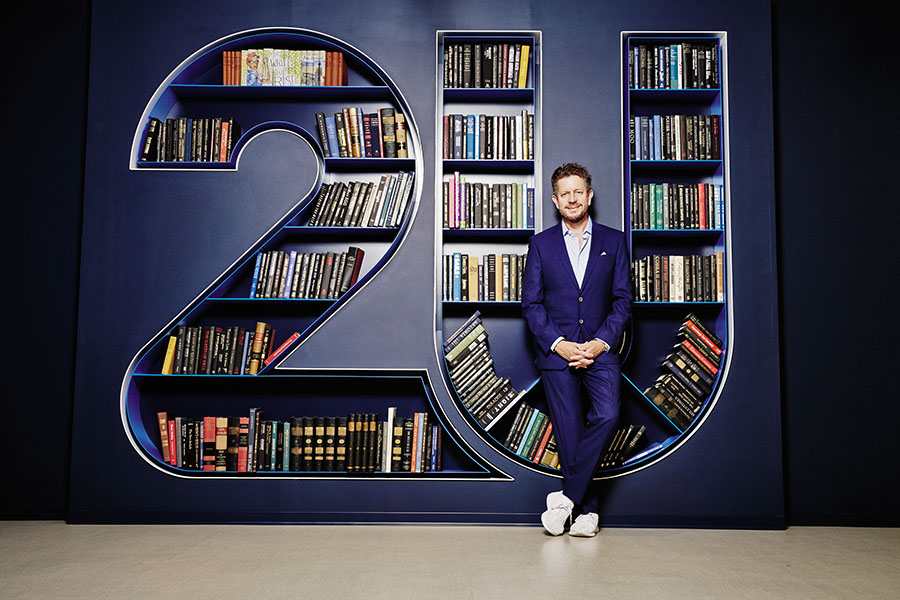 2U chief Chip Paucek at the company’s headquarters in Lanham, Maryland. The books may be props, but 2U’s $4.7 billion valuation speaks volumes about its acceptance at scholarly institutions
Image: Jamel Toppin for Forbes

In 2014, when Douglas Shackelford was named dean of UNC’s Kenan-Flagler Business School, his most important strategic initiative was clear. UNC was a top-tier public university, but its B-school, barely in the top 20, was on a mission to greatly expand its enrolment on the cheap.

“Our traditional revenue sources were changing, and not in a good direction,” says Shackelford, 60.

So UNC forged ahead with a little-known company called 2U, based in Lanham, Maryland. In exchange for 60 percent of future tuition revenues, 2U would invest $5 million to $10 million building out UNC’s software and marketing capabilities, scour the globe for online applicants and, importantly, leave the admissions decisions and teaching to Chapel Hill.

The results have been impressive: Seven years after it launched its programme with 2U, UNC is the largest online MBA provider, with 938 students, most of whom pay full tuition. Only half as many are enrolled in the full-time residential programme. “We’ve doubled our student body without adding any buildings in Chapel Hill,” says Shackelford, noting that tuition for MBA@UNC costs $124,000. In fact, online revenue has nearly tripled to $14 million, while faculty head count has held steady, and operating income has gone from a $1.4 million loss to a $5 million profit.

Known as an online-program manager, or OPM, 2U is the nation’s leading provider of software for universities seeking to quickly expand enrolment digitally. Its cloud-based content-management platform allows students and staffers to seamlessly connect to universities’ existing systems, handling everything from loading lectures and hosting intimate discussion groups to troubleshooting technical glitches.

In its first decade, 38,000-plus students have enrolled in 2U-administered degree programmes, and 2U is on track to generate as much as $412 million in revenue this year, a 44 percent increase. The company isn’t yet profitable since it’s launching programmes at a quickening pace and only recoups its hefty initial investments by the fourth year of its typical ten-year contract. Still, 2U’s Nasdaq-listed shares have risen from their 2014 IPO price of $13 to $80, making the company worth $4.7 billion. “We have a massive amount of market runway,” says 2U chief executive and co-founder Chip Paucek, who’s aiming for 5 percent of the $80 billion global market for graduate degrees.

Master’s programmes are 2U’s sweet spot, and its offerings to university administrators are soup to nuts. Besides software, the company has a small army of social-media-savvy marketers to assist in recruiting. It also finds placements for students in areas like education, nursing and social work. For Georgetown’s midwifery programme, for instance, 2U partnered with hospitals so that each online student delivers 20 to 40 babies by graduation. When USC’s Rossier School of Education demanded that candidates have at least three semester-long teaching placements, 2U built relationships with elementary and high schools in 50 states. So far it has placed over 43,000 students.

For Cory Broussard, 37, who got his MBA from UNC in 2014, it meant not having to quit his day job as an engineer on an offshore platform for Shell in the Gulf of Mexico. “The professors were just brilliant,” says Broussard, who, like all 2U students, attended periodic immersion sessions on campus.

OPMs have a dismal reputation in education circles because they have long been associated with for-profit boiler-room-type operations. They came under the scrutiny of the department of education, in part because they encouraged students to pile on government-backed loans to finance dubious degrees. By avoiding any notion of being an academic institution, 2U has positioned itself as a white-label software-and-services firm with a blue-chip client base. Its graduate offerings are in fields with strong job prospects. Besides UNC, 2U has offerings with schools, including Yale, NYU, UC Berkeley, Tufts, Northwestern and Vanderbilt.

Timing is everything in business, and 2U’s crisis-era launch was fortunate. With finances strained and digital technologies disrupting nearly every industry, top universities finally accepted online degree programmes as equal to on-campus alternatives. 2U has 64 degree programmes with 26 universities and is adding more than 14 new programmes each year.

Paucek, 47, 2U’s mastermind, has been involved in educational ventures since the early 1990s. In the 2000s, Paucek ran Hooked on Phonics for Sylvan Learning. After its parent company was sold, Paucek partnered with John Katzman, the founder of Princeton Review, to start 2U in 2008.

2U’s success has sparked a deluge of competitors, including a new outfit from Katzman, who left in 2012. There are others: Coursera, which operates massive open online courses (Mooc), manages a $22,000-a-year MBA at the University of Illinois and will soon start programmes at Michigan and Pennsylvania. Edx, a Mooc founded by Harvard and MIT, offers a master of science in analytics from Georgia Tech for less than $10,000 and will launch 13 other programmes. Overall, the number of OPMs is 30 and rising, according to Eduventures Research.

If that weren’t enough, schools like Harvard and Cornell are building their own systems. Short-sellers are thus eyeing 2U, as margin pressure is inevitable.

Don’t underestimate 2U’s first-mover advantage. In academia, where risk-taking is anathema, reputation and word of mouth often trump hard economic analysis. “It’s a pretty simple business,” Paucek says, whose 2U stake is worth $100 million. “If the student wins, the university wins. If the university wins, we win. We believe that. It’s not some PR talk.”