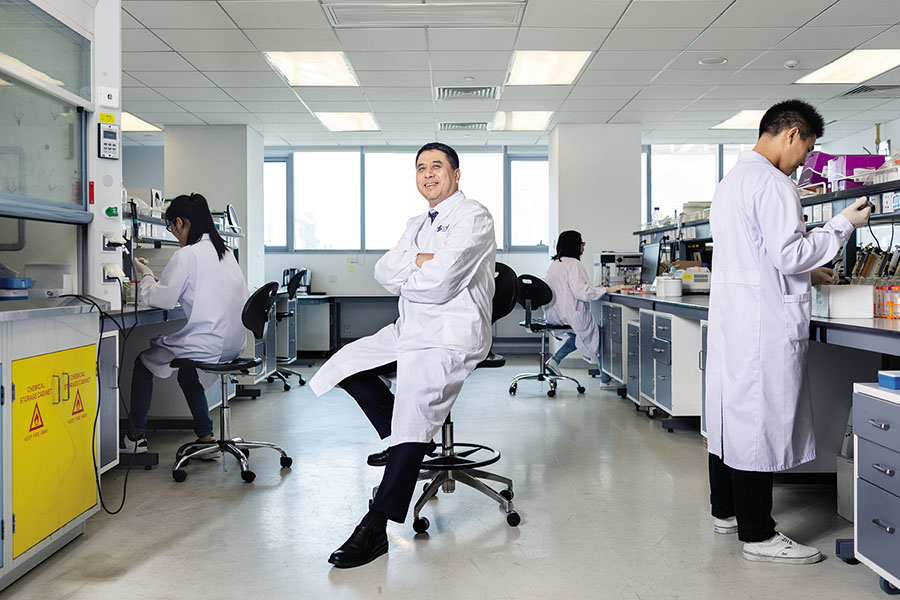 It’s much more comfortable without the tie,” says Lou Jing (55) after posing for a photographer. “I still haven’t got used to it.” The chairman and CEO of 3SBio, one of China’s largest biopharma firms, is more at ease in just his lab coat.

No wonder: He headed the research of two of the company’s market-leader drugs: Tpiao for low blood-platelet count in oncology patients, with a 51 percent share in China, the world’s only commercialised recombinant drug of its kind, and EPO—or biotech blood-cell boosting—drug Epiao for kidney-induced anemia, with a 34 percent share.

On the backs of those two medicines, 3SBio’s revenue last year surged by a third to $553 million. Both drugs were developed at the Shenyang company’s US research centre near Washington, DC, set up by Lou in 1995 after a two-year postdoc at the National Institutes of Health in Maryland.

Although 3SBio reflects a sectoral surge in China—half a dozen other Chinese drug or biotech firms join it on this year’s 200 Best Under A Billion list, and the government made the industry part of its ‘2025’ quest for world economic leadership—its success has been 25 years in the making. Lou’s father, Lou Dan, an army medic turned researcher, founded state-affiliated Shenyang Sunshine Pharmaceutical in 1993. As it soon privatised, his son’s US academic work led to the lab opening there.

Lou Jing moved the US research centre to Shenyang in 2001 and shifted his focus to finance and management when the exchange of resources between China and the US got difficult after 9/11. Having worked for over a decade with his father, he fully took over day-to-day management when Lou Dan retired in 2012. (He died this past March.)

Sunshine started with an interferon drug and launched it in 1995 when the son came on board. Within a few years the drug’s price was lowered to 60 percent below market, generating cash flow to finance research on Epiao and Tpiao, launched, respectively, in 1998 and 2005.

Today 3SBio has a 2,500-strong sales force out of 4,000 employees, with some of the original sales team still in service. Its portfolio of 30-plus drugs is sold to 14,000 hospitals and medical institutions in China. “American doctors enjoy meeting new [salespeople], which to them means new information and new opportunities, but Chinese doctors prefer a familiar face,” says Lou.

The company was renamed 3SBio and went public on Nasdaq in 2007 as the exchange’s first Chinese biopharma firm. It met a lukewarm capital market, however. Its revenue and profit grew 30 percent annually, but its stock price kept dropping. “We were too small for a pharmaceutical firm,” he recalls. “All the big long funds were looking at companies with $500 million revenue or above, but we only made $60 million. Nobody cared about what we were doing.” The company was taken private in 2013 and relisted on the Hong Kong Stock Exchange in 2015 with an IPO-day market capitalisation of $2.2 billion, nearly seven times its delisting valuation. Today that market cap is $5.7 billion, and Lou and his wife own nearly a quarter.

He still spends 30 percent of his time getting acquainted with research trends and the rest on managerial duties.

Since 2014 3SBio has been on a buying spree. It acquired Italian contract drugmaker Sirton; a lower-end EPO drugmaker in Shenzhen with an 8 percent China market share; and a biopharma firm in Shanghai, now called Sunshine Guojian, whose autoimmune drug Yisaipu has a 60 percent share in the country. (It also licensed the China rights to two diabetes drugs from pharma giants AstraZeneca and Eli Lilly.)

“Yisaipu was the first [of its kind] on the market, ahead of the then Wyeth [now Pfizer] contender product by multiple years,” says Helen Chen, head of China and Asia life sciences at US consulting firm LEK in its Shanghai office. “It was and is competitively priced to the multinational corporations’ products as well as other domestic follow-ons.”

For all its early gains at home, however, 3SBio faces struggles abroad. Lou says he wants half its sales to be abroad in 10 years. Right now, that share is only 2 percent.

Last year 3SBio planned to absorb a Canadian contract manufacturer, but failed to get approval from authorities there. Lou hopes Sirton will open a window into Europe, and he’ll keep looking for another North American outpost. “The current international situation is not so favorable, but it’s temporary,” he avers. “It has nothing to do with [biopharma] technology and won’t affect us in the long run.”

The company has been conducting clinical trials for Epiao in Russia and Thailand, and Yisaipu, contributing to 27 percent of 3SBio’s sales in 2017, has been approved in 11 countries and is in the registration process in 19. Since 2016 both Tpiao and Epiao have got marketing authorisation in Ukraine, which belongs to a regulatory network of 50-odd nations on medical products’ manufacturing practices. Lou believes the breakthrough there will facilitate reviews by other members, such as Thailand, supercharging growth.

China is not yet in that circuit but has joined other global organisations such as one harmonising pharma registration requirements, syncing its domestic standards with those in the US and Europe. However, its execution still lags, notes Carrie Chen, Deloitte’s China partner, and registration of drugs abroad is a taxing process.

Sunshine Guojian plays another role in Lou’s master plan. With the largest plant in China for monoclonal antibodies, an important component for bio drugs in autoimmune and other areas, Guojian will supply 3SBio’s contract manufacturers when overseas market approvals are in place. Today 3SBio has 31 drug candidates in the pipeline; seven have passed Phase III, the last clinical trial under China’s FDA.

But 3SBio still sees a vast untapped China market for bio drugs. An example: Only 500,000 of China’s 9 million kidney-induced anaemia patients are using EPO drugs, the rest taking chemical compounds or traditional Chinese medicine. “Biopharmaceutics are more long-lasting and have less severe side effects. It should be the patients’ first choice,” Lou says. “But with China banning direct-to-consumer advertising [on prescription medicine], you can only count on doctors.”

LEK’s Chen balks at the claim on duration and side effects, but does expect biologics to represent 12 percent of China’s prescription pharma market in value in five years, up from 7 percent last year. That market, second only to the US, was pegged at $123 billion last year and expected to reach $160 billion by 2022. However, Chen figures a quarter of the overall market will be biopharma’s ceiling: “There will always continue to be usage of chemical drugs and also Chinese medicine, even without government encouragement.”

One hurdle is cost. Tpiao and Yisaipu only became reimbursable drugs under China’s national health care plan last year, although not for all their indications, and Epiao still hasn’t made the list.

Lou’s prognosis is bullish, though, as China is committed to revisit the reimbursement list annually. “Overseas expansion is one way to hedge the risks as we grow bigger,” he says. “China will always be our home base.”

Tweets by @forbes_india
The Forbes 400: Ranking of the wealthiest Americans
The biggest wealth losers