A step above: Shoemaker Jack Erwin is disrupting the market for affordable footwear

Three-year-old shoemaker Jack Erwin disrupted the footwear market by cutting out the middleman. Can it make the next leap forward? 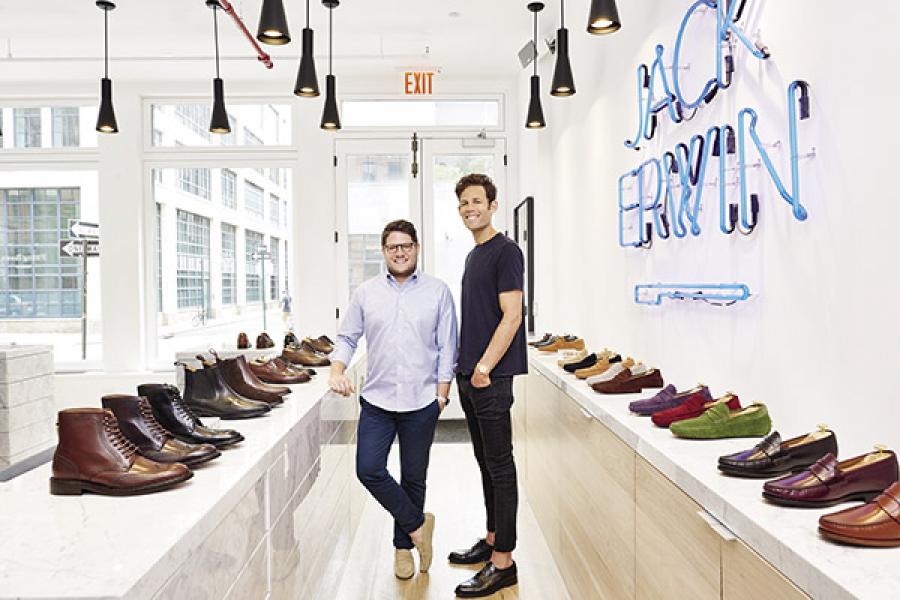 Image: Jamel Toppin for Forbes
Walking the line: Three years into their journey, Ariel Nelson (left) and Lane Gerson say sales of their Jack Erwin brand of shoes are brisk. Revenue more than doubled in 2015, to $5 million, though direct-to-consumer competitors are already nipping at the company’s heels

Ariel Nelson’s decision to get a buzz cut in the middle of a sweltering New York summer four years ago was a turning point in his career. After a frustrating May 2012 shopping expedition for dress shoes, he and his friend Lane Gerson, then 29 and 30 years old, had decided to start a direct-to-consumer footwear company. The European brands they loved, such as John Lobb and Edward Green, retailed for $1,000 or more. Why not make the kind of shoes they wanted to buy but couldn’t afford?

“The idea was, let’s make beautiful men’s dress shoes for $100 and sell them for $200,” Gerson says. They named their nonexistent company Jack Erwin, the first names of their fathers, who “wouldn’t pay more than $200 for a pair of shoes”. But Gerson, then a controller at CAD BLU, a 3D printing firm, and Nelson, who was a manager at Beyer Farms, a beverage distribution company, knew nothing about the shoe business. “It was a completely naive and totally simplistic plan,” Gerson admits. After three months of research, all the duo had learned was that they had no idea how to take the first step in this would-be venture.

But then, Nelson found himself sitting next to a Frenchman named Bertrand Guillaume in a cramped barber shop on Manhattan’s West 26th Street. The 42-year-old Guillaume was venting about his job as the senior manager of product development in the shoe division of Ralph Lauren. He accepted Nelson’s invitation for drinks, where he told the friends that their idea wasn’t nuts. “At Ralph, shoes would land in the warehouse for around $90, the wholesaler would sell to Barneys for $225 and the shoes would sell at retail for more than $600,” Guillaume says. “I knew they could sell a shoe with great craftsmanship for $200. It was a brilliant idea.”

At a time when sellers of everything from eyeglasses (Warby Parker) to mattresses (Casper and Tuft & Needle) are undercutting traditional retail channels by excising middlemen, Jack Erwin fills a gap in the market for handcrafted, European shoes. Though the partners say they had their contemporaries in mind—style-conscious millennials who prefer penny loafers and cap-toed lace-ups to Converse or Nike—they’re pleased that the brand has also been discovered by older men looking for a bargain.

Before production could begin, the team needed to come up with designs for their last (the mould around which the shoe is constructed). They agreed that Jack Erwins should have sturdy leather soles and a slightly elongated shape that tapers to a subtle curve. Guillaume recommended they work with a factory in São João da Madeira, Portugal, which would source materials for the initial run of 3,000 shoes.

In December 2012, Nelson lost his day job when his company went under. The two started scrambling for cash. After family, friends and friends of friends enthusiastically invested $650,000 in startup costs, Gerson quit his job. “Once we took other people’s money,” he explains, “it was all or nothing”. To drive initial sales, Nelson and Gerson sent an email blast to more than 3,000 contacts, offering a lifetime discount of 10 percent on purchases. The first few thousand Jack Erwins debuted online in October 2013. They sold out in two months. (By 2014-end, first-year revenue came to $2 million.)

In early 2014, Guillaume, who had been moonlighting in exchange for a small stake in the company, joined full-time. He guided a move from Portugal to four factories in Almansa, Spain, where the craftsmanship is a step above and the factories accept independent sourcing of materials like laces and insoles. Independent sourcing meant smaller markups and more savings. From an initial cost of $90 per pair of $195 lace-ups, they’ve brought the cost below $80.

Still, to expand, the company needed more cash. An email from the original blast had landed in the inbox of Adam Levin, a venture capitalist at Crosslink Capital in San Francisco. A fellow millennial, who wanted nice shoes, he loved the Jack Erwin concept. In 2014, together with two other California VCs, Crosslink invested $2 million.

Then Jack Erwin got an enquiry that startled the team. Caleres, the publicly traded shoe company that owns Dr. Scholl’s and Naturalizer, among other brands, and has sales of $2.6 billion, wanted to invest. By September 2014, Caleres led a financing round totalling $9 million.

Still, the partners kept operations lean, working in a 1,200-square-feet, two-bedroom New York apartment where Nelson and Gerson lived as roommates. Earlier this year they upgraded to a 5,000-square-feet loft in Manhattan’s Tribeca neighbourhood with raw wood floors, exposed brick and an Australian shepherd named Pancake, who belongs to Molly, a customer service representative. Aside from a midtown pop-up store that ran for five months last year, the brand’s only brick-and-mortar presence is a 400-square-feet Tribeca space where customers can try on samples and order online.

Three years into their journey, Nelson and Gerson say sales are brisk. Revenue more than doubled in 2015, to $5 million, and the staff has expanded to 20. Gerson says he and Nelson are electing to fund growth rather than turn a profit. Though the plan is to keep the selection small, this summer they introduced two casual offerings, a $125 boat shoe and a $115 suede driving loafer in eight colours.

How big can Jack Erwin get? Direct-to-consumer competitors are already nipping at its heels. Boston-based M.Gemi, which launched last year, offers Italian-made lace-ups for $278. Paul Evans, based in New York, also sells Italian-made dress shoes, starting at $399. But no one has yet tried to muscle in on Jack Erwin’s $200 niche. “I believe there are hundreds of millions of dollars in opportunity here,” Nelson says, “and we are poised to become the big player.”

Tweets by @forbes_india
The fall and rise of Rohit Sharma
Indian art: The lasting strokes of Group 1890