A Texas Newspaper is Thriving in Print 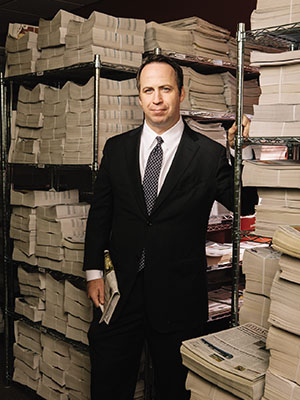 Image: Michael Thad Carter for Forbes
We don’t editorialise. We lose all credibility when we take one side of an issue

If you want to be in the news business and don’t have an online strategy, you ought to have your head examined—and your cofﬁn sized. Unless you’re John Garrett. The 37-year-old Texan publishes 13 editions of hyperlocal Community Impact Newspaper, delivered free each month to 855,000 homes in the Austin, Houston and Dallas areas. (Daily circulation at both the Houston Chronicle and the Dallas Morning News is roughly 400,000.) And it makes money: It pulled in an estimated $1.5 million in operating income in 2012 on advertising revenue of $10 million. But less than 5 percent of that business comes from its website.

Is Garrett holed up in his own Alamo, hoping to make a heroic, if desperate, last stand for print? Media consultancy ZenithOptimedia ﬁgures that by 2015 spending on internet-based ad campaigns will hit 23 percent of the $182 billion US market, outstripping what’s spent on both newspapers and magazines. In fact, Garrett is no Luddite and has had a website since 2005, when he launched the business with his wife, Jennifer.

“I think about online a lot,” he says. “But our focus is local content, and that’s best monetised via print. For mom-and-pop businesses there’s just not many other ways to get exposure to the community they live in. When local content is better monetised digitally, we’ll be ready.”

Back in 2005, while advertising director for the Austin Business Journal, Garrett was shocked that no local publication was covering the construction of a huge toll road. He saw an opportunity for some kind of neighbourhood news source. “It doesn’t matter who you talk to,” he says, “everybody is interested in roads and taxes.”

But what sort of media vehicle—and how to get it out there? He wasn’t interested in starting a blog, and Austinites were unlikely to go searching for civic news.

A tabloid-size paper with full-colour photos, the Business Journal was distributed by mail weekly to subscribers who pay about a buck an issue. Garrett copied the look and feel of the paper but wouldn’t have subscribers. He decided the way to build a true community paper was to mail it to every single home in the area and charge nothing for it. “It’s ‘push’ technology called the US Postal Service,” he laughs.

To start, he and Jennifer borrowed $40,000 on a low-interest credit card. Because he was an ad-sales guy and not a journalist or wordsmith, Garrett tracked down someone whose verbal skills and temperament he trusted: His eighth-grade journalism teacher. “I thought for sure he was going to try to sell me some Amway,” says Cathy Kincaid.

Suspicions allayed, Kincaid helped to oversee coverage of the new toll road, the most complete of its kind, in the inaugural September 2005 issue. She’s been executive editor ever since, managing a staff of 30 journalists, just 35 percent of Impact’s total head count.

It doesn’t take a lot of personnel to put out a monthly, especially when half its content is ads and coupons. Each edition usually has one editor and one reporter, plus a general manager, a couple of account executives and a graphic designer. No big-name columnists, no newspaper union members and no pension funds to worry about. The editorial voice is about as earnest and devoid of irony as you can get in this business. “We don’t editorialise,” Garrett explains. “We lose all credibility when we take one side of an issue.”

Impact has taken a few hits from critics as providing little more than a shopper. “We want to do in-depth stories on sometimes controversial issues, but we don’t want to do investigative reporting,” says Garrett. Examples: Features about proposed changes to middle-school sex education in Round Rock; contentious zoning issues; the ﬁght to close down Planet K, which sells imported smoke products and erotica.

Mostly, though, the papers try to appeal to everyone by providing useful, need-to-know info. You can learn about the effect of Exxon Mobil’s giant new campus under construction in The Woodlands, the efforts to plant new trees to replace those lost to last year’s drought or the threat of decrepit upstream dams to the Houston water supply.

Advertisers seem happy. “We’ve tried just about everything, from Google Ads to Groupon, but this is the most effective,” says Richard Hunter, who spends a few hundred dollars a month with Impact, advertising his northwest Houston restaurant Catﬁsh Station. “We get the biggest impact reaching out to people in a 2- to 10-mile radius of our restaurant.” Rob Sides, owner of Toy Time, places about 80 percent of his ad dollars with Impact’s Pﬂugerville-Round Rock edition in order to reach the 90,000 homes in the area. “There’s no better deal out there for the return I get,” says Sides.

Garrett doesn’t scruple publishing nice articles about his accounts. Ken Moncebaiz, who operates K&M Steam Cleaning in Austin, bought an ad in the ﬁrst issue of Impact and has bought the inside back cover of the paper ever since, shelling out $11,000 a month. He has been rewarded with the occasional story. With 10 trucks to keep busy, “I buy advertising for a living,” says Moncebaiz; most of his $33,000-a-month spend goes online to Google Ads and PaperClick. He doesn’t hesitate to call up Garrett when he sees ads for too many competing carpet cleaners in the paper.

“One of the most difficult things to explain to our advertisers is when we do a business proﬁle of one of their competitors,” says Garrett. “Those are hard but important conversations for the integrity of our product.”

We estimate that Impact grosses 16 percent or so. Each 40-page issue brings in roughly $2.50 in ad revenue per copy printed. About 50 cents of that goes to mailing and distribution costs, 80 cents to payroll, and another 80 cents to printing and overhead, leaving roughly 40 cents per copy.

That may not be sustainable forever, argues Jeff Jarvis, director of the Tow-Knight Center for Entrepreneurial Journalism at City University of New York. “This model has been around for a long time and will suffer the same pressures of advertisers going online and a rising cost structure as the US Postal Service is forced to raise rates,” he says.

Could Garrett be exploiting online more proﬁtably? Absolutely. Each month its site, impactnews.com, gets but 120,000 unique visitors who are served billboard ads from Wells Fargo and Porsche but also from local credit unions and car dealerships. Garrett insists the only way to reach a critical mass of eyeballs is to post content with broad national or international appeal. He seems to have missed out on the trend for local business marketing, led by companies like Foursquare.

Moreover, the site fails to capitalise on its own scoops. Examples: That Round Rock was looking to attract a Major League Baseball team; that In-N-Out Burger was coming to the same town. That allows rival media outlets to aggregate Impact’s reporting, collect the traffic and serve the ad impressions.

“It’s crazy out there,” says Garrett. Meantime, he seems to be doing okay by investing in content and distribution for a dying medium. Says he: “I’m a fan of going against the grain.”