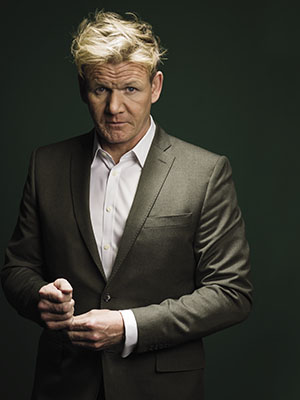 It’s two hours until shooting wraps on MasterChef Junior’s fourth season, the celebratory champagne already chilling in plastic buckets in a dark, windowless studio in Burbank, California. Yet, chef Gordon Ramsay, dressed in a slim blue suit, has business to attend to. The show’s executive producer and star, world famous for his profanity and anger, is about to name a winner for his child-cooks competition—and send a pint-size runner-up home disappointed. “I hate that bit,” he says.

Once the cameras roll, Ramsay gives the sub-14-year-old loser a big hug. The man who once responded to a request for more pumpkin on a dish by oﬀering to stuﬀ the ingredient up the customer’s, eh, cavity has created a sugary, made-for-TV moment. And another huge payday. If playing against type necessitates that, so be it.

Ramsay, 48, is a formidable chef and an engaging television presence. But he’s, above all, a capitalist, taking in $60 million last year, good enough for a No. 21 ranking on the Celebrity 100—and what we believe to be the highest-ever haul for a celebrity toque. With American Idol fading, his four shows—Hell’s Kitchen, Hotel Hell, MasterChef and MasterChef Junior—make him Fox’s biggest reality TV star. His 26 restaurants across the US, Europe, Asia and the Middle East bring in millions, despite the fact that his schedule makes it highly unlikely that you’ll see Ramsay manning the stove on any given night. “I have more money than I’ll ever need,” he says.

At the root of the Ramsay brand is credibility—important when you’re ﬂaying people on TV and serving up a tasting menu of foie gras, lobster ravioli and pigeon that starts at $230. He apprenticed with Europe’s best—Marco Pierre White, Joël Robuchon, Guy Savoy—before becoming, at 26, head chef at a new London restaurant, Aubergine. Even then, he was thinking equity—he wrangled a 25 percent stake and ran up its value by delivering two Michelin stars within three years. “The joke back in the early ’90s was that all the cooks in hell were British,” says Peter Harden, the eponymous publisher of a British restaurant guide. “But Aubergine quickly became the kind of place that had a six-week waiting list.” That wasn’t enough. He quit and in 1998 opened Restaurant Gordon Ramsay with his father-in-law Chris Hutcheson. This one nailed three stars, the highest rating Michelin bestows, which allowed him to charge the kind of prices that juice margins as high as 25 percent on $5 million in revenue. He followed up with outlets in Glasgow, Tokyo, Dubai and New York City.

Meanwhile, a BBC documentary series, Ramsay’s Boiling Point, about the ﬁrst days at Restaurant Gordon Ramsay, put a spotlight directly on Ramsay’s explosive behaviour in the kitchen. (Typical scene: He chews out a maître d’ for his failing eﬀorts at examining the air-conditioning: “Are your brains in your f—king ass?”) Audiences couldn’t get enough. And, as with his kitchen, rather than work for someone else, he’d do it himself.

In 2004, he debuted the British version of a cooking boot camp, Hell’s Kitchen, with a deal that gave him a cut of the show’s distribution sales. A US version featuring wannabe home cooks instead of C-list celebrities hit the small screen in 2005. Kitchen Nightmares debuted two years later, with Ramsay parachuting into failing restaurants in profanity-laced attempts to save them.

It clocked 3.1 ratings (8 is the top)— hardly the Super Bowl but unprece- dented for a cooking show. “It took us until this era to really make food on TV more interesting,” says Arthur Smith, a longtime producing partner and early supporter of Ramsay, “and it took someone like Gordon Ramsay to really push it over the top.”

Not everything was going as well. The Great Recession cut appetites for elaborate tasting menus and thinned the herds of pin-striped bankers who ate at his restaurant empire. His hold- ing company accumulated more than $30 million in debt by 2010—two- thirds of which was a personal loan from Ramsay—a nearly ten-fold in- crease in eight years. The chef blames his father-in-law, whom he ﬁred in 2010, part of a “very ugly family ﬁght”, according to Hutcheson. Hutcheson steadfastly denies any wrongdoing, and their enmity led them into the courtroom repeatedly, both trading legal blows and both claiming victory.

Despite the setbacks, Ramsay’s restaurants have rebounded, thanks to a better economy—and the endless marketing furnished by his television shows. As the only thing Fox’s nonscripted slate has going for it, Ramsay can generate a big payday: More than $400,000 an episode (he won’t comment on the figure, which is at least 15 times what a Food Network star can expect). Since he’s the executive producer of his shows, he can stack the shooting schedule to fit his calendar. He wants to create a scripted show next, perhaps dramatising the kitchen the way Entourage glorified the talent agency office.

And even after closing nine restaurants and selling three during his family feud, he has more restaurants today than ever before: 26 versus 20 in 2010. Those restaurants generate $150 million in revenue, a 270 percent increase from five years earlier, including new outposts in Asia, the Middle East and Atlantic City, New Jersey. Part of his international expansion focuses on restaurants modelled after his Bread Street Kitchen in London, a place having more in common with a big, jubilant brasserie than the fine-dining restaurants that made him famous (and that he still maintains in England). While he isn’t ruling out owning new restaurants, he’s been focusing on deals like the ones he has in Las Vegas, where he manages—and lends his fame—to a burger joint, a steak house and a pub. In return, he gets 6 percent to 9 percent of revenue and 10 percent to 15 percent of earnings. A no-lose situation and the kind that might lead a famous terror to hug a child. “I don’t have bad days. Those days are gone,” he shrugs. “Do I look like a chef who’s running around stressed as f—k?”

Tweets by @forbesindia
Data vs Intuition: Can the twain meet?
Celebrated authors who did not write a second novel