Brooklyn's Billionaire Is Betting On The Borough, Again

Cash crises, political grudge matches, suicide. None of it stopped David Walentas from forging a 10-digit fortune by creating an entire neighbourhood in New York's underdog borough. And he's about to do it all again 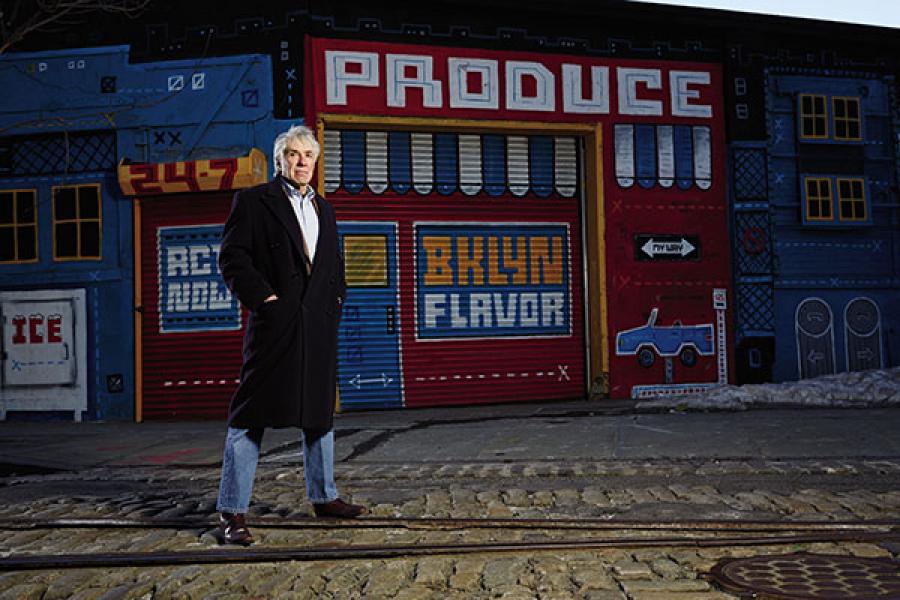 Hidden under the iconic Brooklyn and Manhattan suspension bridges, a neighbourhood little-known outside New York glistens like a movie set, if that flick combined On the Waterfront with Sex and the City. In Brooklyn’s Dumbo, the streets are carved from cobblestones, the hulking industrial edifices ooze pre-war charm and approximately one-quarter of the companies leading the Big Apple’s design and tech boom, including West Elm and Etsy, lie within, alongside art galleries, artisanal shops and boutiques with precious names like Peas & Pickles and Recycle-a-Bicycle. The spa- cious apartment lofts, many with spectacular water views, rent and sell for higher prices than many of their Manhattan equivalents.

In a city that has thrived for three centuries on capitalist chaos, the architect of this urban perfection, concocted with the detailed obsession of a Disney imagineer, sits in a windowless sixth-foor conference room. Nothing in Dumbo is accidental, and it’s all the product of David Walentas.

Thirty-five years ago Walentas borrowed $12 million to buy 2 million square feet of this neighbourhood—the lion’s share of what was then a dying industrial district filled with underused warehouses. Today you can find one of his firm’s Dumbo apartments, a swank penthouse in a vintage clock tower, listed at $15 million. Even after selling off 700,000 square feet of the initial parcel and later accumulating more property, his 2.3-million-square-foot portfolio plus other assets, factoring in debt, makes Walentas worth an estimated $1.4 billion. Manhattan has produced numerous real estate tycoons (see opposite), and a few have made fortunes building for the masses in places like Queens. But Walentas is the first billionaire to ever make his money almost entirely in New York’s coolest borough.

“It was an untouched industrial neighbourhood,” he marvels. “We got the whole neighbourhood. You had the freedom to create a neighbourhood. In New York. And whatever you did with one building would add value to the others.”

It was, in retrospect, one of the best New York real estate deals since Peter Minuit bought Manhattan for trinkets and beads, and one with the potential to produce an even grander sequel, Mayor Bill de Blasio willing.

Dumbo in the raw held natural appeal for Walentas, who came from a faded industrial town, Rochester, New York, and still carries a gruff demeanour learnt growing up poor there. His father, a postal worker, had a stroke that left him paralysed when Walentas was five. His mother worked two jobs to support him and his older brother. When that still wasn’t enough, she sent the boys off to live and work on nearby farms. They spent their days, recalls Walentas, as “something between an orphan and an indentured servant”, with a daily routine consisting of “shovelling s--t and milking cows, going to school, coming home, shovelling s--t and milking cows”. He acted out at school and was suspended five times but still managed to become class president, with high enough marks to win a four-year ROTC scholarship to the University of Virginia.

His rascal behaviour didn’t stop there. He lost his scholarship during his junior year for paying a clandestine visit to a nearby all-girls school. He went back to work in Rochester until he had saved enough money to return to UVa and finish his degree in mechanical engineering. He graduated in 1961 and headed to Greenland to clean septic tanks for the military, “something my farm days prepared me well for”, he says. It was good, fast money, and after five months he went to visit his brother, then in the air force in Madrid. He quickly blew through his cash, buying a white Volkswagen bug and eventually travelling down to Casablanca, where he spent his days on the wharf looking for a ship to take him home and his nights in hostels, picking up fleas.

The ship landed at a pier on Brooklyn’s west shoreline in 1962. Walentas says he made his first $10 in the city selling a pint of blood; he used it to pay for a meal, fill up his car and return to Rochester. It would be another four years before he returned to New York, during which time he got his MBA from UVa and worked for sewing machine manufacturer Singer in Australia and Japan. He came back to New York in 1966 to work for consulting firm Peat Marwick.

After work he would spend many nights wandering around its rough edges. “I just wanted to be a real estate developer,” he says. “I was attracted to the ability to build stuff, to collect rent, to own it.” But he never had enough cash, and the banks had no interest in lending to a broke consultant without a property background.