Child of the pledge

Ted Stanley made a fortune on knickknacks, then promised it to medical research on mental illness. His son is bird-dogging that commitment. And, yes, it's personal 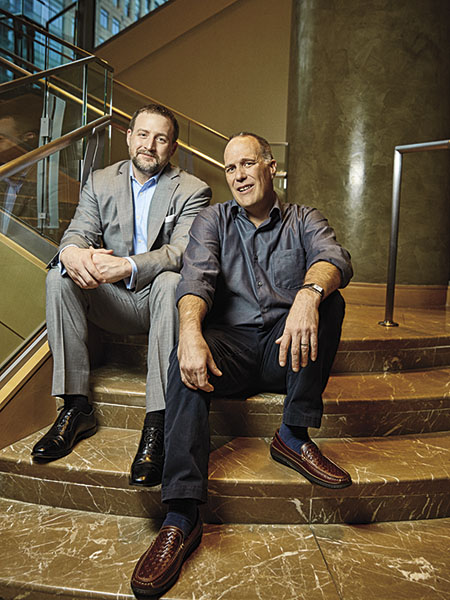 Changing laws affecting treatment of the mentally ill in 30 states: Jon Stanley (right) with John Snook, current executive director of the Treatment Advocacy Center
Creative Style Director: Joseph Deacetis Suits and Shirts by Brooks Brothers
Image: Matthew Furman for Forbes
At the age of 19, Jonathan Stanley dropped out of college and began behaving erratically. He ended up in a psychiatric unit, brought there by New York City cops called to deal with a naked young man in a deli convinced secret agents were after him. Diagnosed as bipolar with psychotic features, Jon went through what he calls a “dramatic four years” before, with the help of lithium and Tegretol, he got fully back on track. He graduated from Williams College and Quinnipiac School of Law and became an expert and lobbyist on laws affecting commitment and treatment of the mentally ill. Name a state and Jon can rattle off what’s right or wrong with its laws.

Yet, at 51, he has put his legal work on the back burner, going into “semi-retirement”, as he puts it in typically self-deprecating fashion. That’s because most of his working hours are now devoted to completing his late father’s $1.4 billion charitable commitment to medical research mental illness, as well as to dealing with more mundane details of his dad’s estate. Jon figures he’ll be ready for his third act by the time he’s 60.

Sure, lots of ageing boomers and Gen-Xers take time from busy lives to wrap up their parents’ affairs. But Jon Stanley has embraced a rare filial duty as what might be called a child of the pledge. Since Bill and Melinda Gates and Warren Buffett proposed in 2010 that their fellow billionaires promise to give at least half their wealth to charity, either during their lifetime or at death, 158 Giving Pledges have been signed, including by Jon’s parents, Ted and Vada Stanley. In only eight cases have both husband and wife (or a sole signer) passed away. There are likely some disappointed would-be heirs out there, but many pledgers, like the Gates, try to bring their kids in early on their philanthropic plans.

That’s exactly what Ted Stanley had done—long before the giving pledge was a thing or he had a specific cause. Ted, who died suddenly in January 2016 at the age of 84, built a fortune marketing collectibles. In 1969, he launched the Danbury Mint with moon-landing medals. Its parent, MBI, now peddles everything from cubic zirconia jewellery to gilt-edged books.

Yet, Ted himself was anything but frivolous or flashy. Even when he was a kid, Jon recalls, his parents took pride in donating half their income each year, and his dad made clear almost all his fortune would go to philanthropy, not family.

“In other families, I would be a billionaire. I don’t need to be a billionaire,’’ says Jon, who lives comfortably in a $1.5 million Fort Lauderdale high-rise condo. Still, family—and more specifically his son—played a big part in Ted Stanley’s charitable mission. “My own experience with mental illness was the biggest crisis in his life until my mom got sick with dementia before she died [in 2013],’’ Jon says. “I got real sick. Then, with the right pills, I got better. That gave [my father] a focus for his philanthropy.” Jon, in turn, seems laser-focussed on making sure Ted’s charitable intent is realised, says lawyer Peter Chadwick, who is co-executor, with Jon, of Ted’s estate.

“I’m the nation’s leading expert on the mind of Ted Stanley,” Jon explains. “My dad was very insular, and I was one of his confidants.”

In 1989, Ted and Vada gave $1 million to seed the Stanley Medical Research Institute in Bethesda, Maryland, to study treatments for schizophrenia and bipolar disorder. Then, over time, they cut back on other giving and ploughed nearly $600 million into the institute, which ran drug trials the pharmaceutical companies wouldn’t (for example, of generic medicines or off-label uses) and sponsored research into the relationship of inflammatory markers and infectious agents to those illnesses. The institute will shut down in the next few years, says E Fuller Torrey, the 79-year-old psychiatrist who directed most of its work.

That’s because a decade ago, with Torrey ageing and advances in psychiatric drugs stalled, the Stanleys decided to invest in new approaches— in particular, using genome mapping to look for markers associated with mental illness. In 2007, they gave $100 million to start the Stanley Center for Psychiatric Research at the Broad Institute of MIT & Harvard, a Cambridge biomedical research centre seeded by Giving Pledge signers Eli and Edythe Broad.

In 2014, having already given $175 million to Broad, Ted pledged an additional $650 million—the largest-ever gift for psychiatric research—with most of that to be funded, after his death, out of his majority stake in MBI. “What Broad created made sense to my dad, so he tagged his whole legacy into it,” Jon says, adding that he sees the move as akin to Buffett’s decision to leave the bulk of his fortune to the already up-and-running Bill & Melinda Gates Foundation.

As the son of a Reading Railroad brakeman, Ted Stanley was not one to waste money. In addition to saving the expense of setting up his own genome research group, Ted instructed that the private Stanley Family Foundation—through which his donations are funnelled—would dissolve within a decade after his death. “Ted didn’t want a foundation that perpetuated [itself] and became fat and lazy,” explains his longtime business partner, Julius Friese, who serves as a trustee of the foundation along with Jon and a Stanley cousin.

Meanwhile, each trustee gets to recommend a slice of the foundation’s annual giving; Jon directs $600,000 a year to the Treatment Advocacy Center (TAC), where he worked as a lawyer and executive director and is now a guiding force on the board. John Snook, the current executive director, credits Jon with playing a pivotal role in TAC’s advocacy, which has led 30 states to change their civil commitment laws to allow for court-supervised community treatment for the mentally ill, instead of just hospitalisation and discharge. “No family has done as much to advance the cause of mental illness treatment,’’ Snook says.

Jon Stanley directs $600,000 a year to TAC, where he is now a guiding force on the board

By the end of 2015, just before Ted’s death, the Stanley Family Foundation had fulfilled the first $50 million of his $650 million pledge and held a half-billion in assets, including a portion of Ted’s MBI holdings valued at $214 million. Now the rest of his MBI stake is going to the foundation, and while Jon won’t say what it’s worth, it seems to be more than enough to make good on the Broad pledge. Privately held MBI says on its website it does $350 million a year in sales

For now, like any kid handling a parent’s estate, Jon is busy talking to realtors about marketing the family’s house and figuring out what to do with their stuff. Only in this case, the house was designed by Frank Lloyd Wright, sits on 15 acres in New Canaan, Connecticut, beside a waterfall and pond, and is on the market for $8 million; the “stuff ” includes an ashtray with a cigar butt supposedly left by Wright himself.

Jon is also trustee of various trusts his dad set up for family members, including a stepbrother and stepsister from Vada’s first marriage. “[The trusts] are more than enough to live your life, but nobody’s getting on a private jet,” he says approvingly. 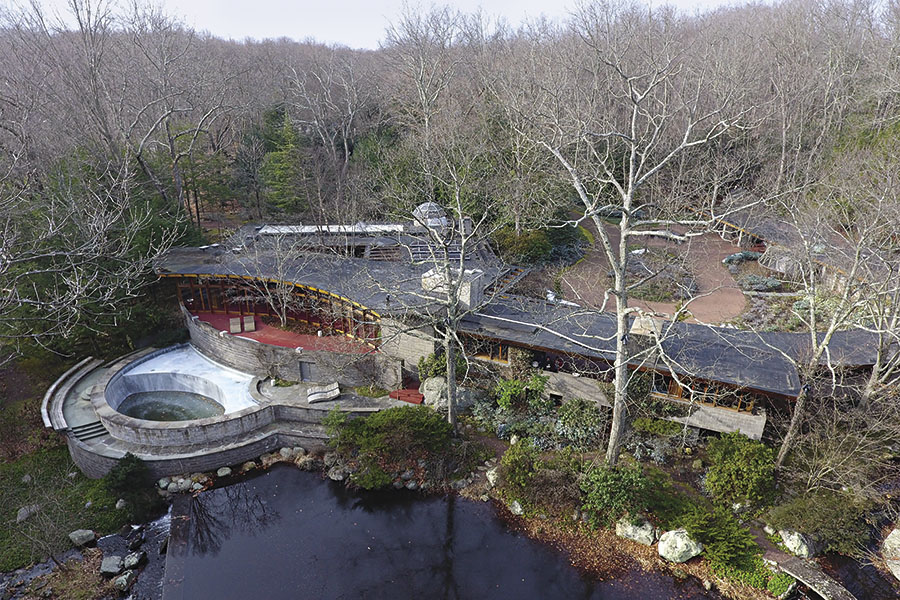 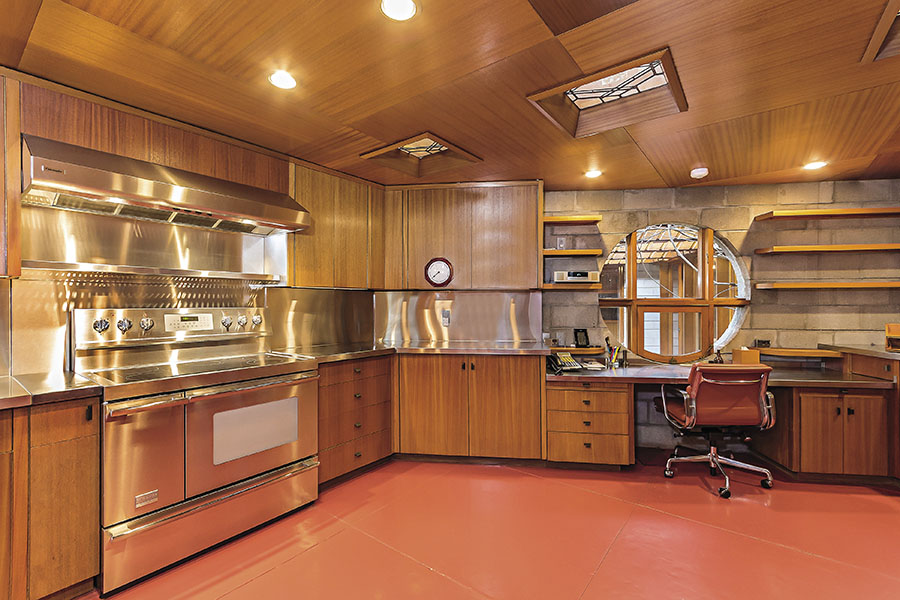 Estate lawyer Peter Chadwick recalls the day Ted Stanley told him he wanted to make charitable arrangements for his stunning 7,000-square-foot, hemicycle-shaped home in New Canaan, Connecticut. “Knowing it was a Frank Lloyd Wright [designed] house, and forgetting for a few minutes who I was dealing with, I asked him, ‘Do you want it to be a historic-house museum?’” Nope, Stanley responded. After his death, he wanted the house sold and the proceeds used, like the rest of his assets, to fund mental illness research. So Chadwick put together papers giving the house to the Stanley Family Foundation but allowing Ted and his wife, Vada, to live in it for the rest of their lives. The usual appeal of this “life estate” giving technique is that you get a current charitable income tax deduction, even as you continue to live in the house. The Stanleys, for their part, probably already had more charity deductions than they could use but “derived personal satisfaction knowing [the future of the house] was wrapped up,’’ Chadwick says. —AE

Tweets by @forbesindia
New Tata Sons boss starts putting his A-team together: What it means
Nothing like the sun (and wind)