Kim has an enviable track record: Since its founding in 2005, MBK Partners has, on average, more than doubled every dollar from investors and had an annualised IRR of 18 percent across its four funds 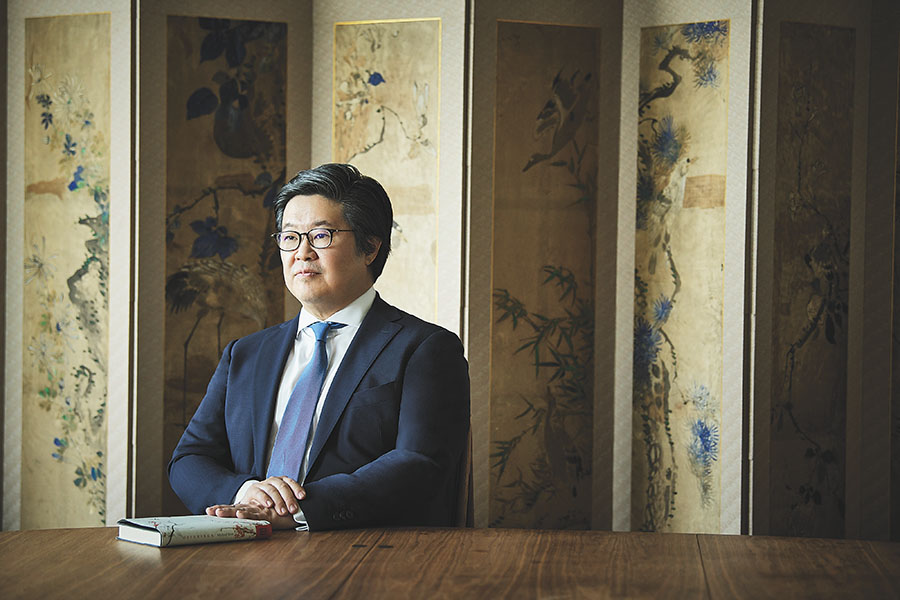 Kim travelled to New York in May to launch his debut novel Offerings. He says the book is fiction, but parallels to his own life are peppered throughout the pages
Image: Jamel Toppin For Forbes Asia

When Korean private equity maven Michael Kim, founder of MBK Partners, launched a new fund last November, little could he have imagined that the world was on the cusp of a once-in-a-century pandemic.

But in crisis lies opportunity. When much of the world was still under lockdown, Kim closed MBK’s fifth and largest fund in May—raising $6.5 billion in just six months. Secured amid an environment that has upended the global economy, the fund is Asia’s largest to close thus far this year.

With this accomplishment, Kim bucked the trend in fundraising for Asia-based private equity firms, which is down two consecutive years, according to McKinsey. The pandemic, ironically, helped Kim reach part of his original target. Investors bought into his thesis that pandemic-linked economic distress would create new opportunities. “We are now sitting on the largest pile of deployable dollars [of any Asia-based buyout fund] just as the market opens up for a golden opportunity,” he says in a video interview from his New York condo overlooking Central Park.

With this latest fund, Seoul-based MBK Partners now manages more than $22 billion in assets across Greater China, Japan and South Korea, making it the largest Asia-based private equity firm (by assets) focussed primarily on buyouts. Kim has an enviable track record: Since its founding in 2005, MBK Partners has, on average, more than doubled every dollar from investors and had an annualised IRR of 18 percent across its four funds. This success has translated to handsome personal gains: With the new fund, he now has an estimated net worth of $1.9 billion, propelling him up 11 spots to No. 12 on the annual list of Korea’s 50 Richest.

MBK focuses on consumer-driven companies in North Asia, such as eHi, China’s second-largest vehicle rental firm by fleet size, chocolate brand Godiva Japan and Homeplus, a Korean discount retail chain. “Basically everything that touches the consumer,” says Kim. He looks for companies with strong cash flow, well-known brands, solid market positions or backed by real estate assets. MBK’s current portfolio of 44 companies boasts an aggregate $44 billion in revenue and employs more than 370,000 staff across North Asia. In 2019, the firm was able to notch up three of the five largest exits in Asia, garnering $3.5 billion in proceeds.

While it’s annus horribilis for the global economy, 2020 may turn out to be a pivotal year for Kim, 56, who named MBK using the initials of his full name, Michael ByungJu Kim. Sitting on $6.5 billion in fresh capital—representing about a third of MBK’s total assets—he’s also celebrating a milestone for his firm, its 15th anniversary. Kim has also just published his first book, which he says took him 25 years to write. The current global downturn, he says, resembles the times when he clinched some of his most successful deals: On the heels of the Great Recession of 2008 and amid the Asia Financial Crisis of 1997-99. “This is an event-driven crisis,” says Kim, in his first major interview in five years. “What that means is when the event is resolved or even after it’s under control, you have a much sharper recovery.”

Kim travelled to New York in May to launch his debut novel Offerings. Kim says the book is fiction, but parallels to his own life are peppered throughout the pages. Born into an affluent and academically-oriented family, he spent his childhood in South Korea before his father, a scholar turned insurance executive, sent him to the US when he was 12. “I didn’t speak a lick of English,” Kim recalls. “He wanted me to get a proper education in an open society, 1970s Korea was not that.” Kim, who at one point considered becoming a journalist, earned a degree in English at Haverford College in Pennsylvania. “I read Fitzgerald and Hemingway before I discovered girls or sports,” he says. To appease his father, however, Kim went on to get a more practical degree: An MBA from Harvard Business School in 1990.

He landed his first job in the mergers and acquisition department of Goldman Sachs, working first in New York and then in Hong Kong. At 31, Kim returned to South Korea and rose to become chief operating officer for Salomon Smith Barney Asia, where he led a $4 billion sovereign bond issue in 1998 that helped stave off South Korea’s national insolvency. In 1999, during the Asian Financial Crisis, he joined private equity firm Carlyle Group as its Asia president—where his late father-in-law Park Tae-joon was an advisor.

Kim, then 37, was quick to seize another opportunity arising from the crisis: The landmark acquisition of KorAm Bank, the country’s sixth largest lender by assets, with billions in potential bad debt. Kim had to overcome many hurdles, among them a rule that blocked a nonbank foreign investor from owning more than 4 percent of a “healthy” bank (KorAm, despite its exposure, was still classified as viable). After 13 months of intensive, complex negotiations, Kim was able to buy a 37 percent stake with a group of investors that included Corsair, JPMorgan’s private equity arm. Four years later, KorAm was sold to Citigroup for $2.7 billion, more than twice what the group had paid. In between those events, to chronicle his feats, Kim appeared in 2002 on the cover of Forbes Global, the precursor to Forbes Asia.

“Ninety-five percent of pension funds do not invest in first-time funds,” says Jim Pittman, who was a managing director at the Canadian fund at the time. Getting the two investors on board was a testament to Kim’s solid reputation as a dealmaker, according to Pittman. Kim likes to describe MBK as a bridge connecting global investors with opportunities in Asia—emphasising his local knowledge to close deals. He built the firm with the idea of fusing Western buyout tactics with the intricacies of Asian business, an approach that convinced his network of institutional investors to write big cheques—and re-up for the next fund. Shunning hostile takeovers, he forged partnerships with management and hired local CEOs for his portfolio companies. “We move faster than anybody who has to report back to New York,” says Kim.

But can Kim sustain MBK’s winning streak? While the firm sits on a massive cash pile, Kim must now strike a balance between making smart investments and growing his portfolio companies, some of which have been hurt by the pandemic. While Kim would ideally like to deploy 40 percent of his latest fund in South Korea and 30 percent each in China and Japan, he must also contend with the possibility of a second wave of the coronavirus. “If there’s a second or third wave, I would be certain to keep my purse strings tight and only spend on essentials,” says Ee Fai Kam, a Singapore-based senior vice president at global research firm Preqin. “But it’s reasonable to expect the distressed pipeline to grow.”

Kim has thrived in past crises. Apart from the KorAm deal, his second fund, launched on the heels of the Great Recession of 2008, returned nearly three times its invested capital—thanks partly to the $1.4 billion acquisition in 2009 with Goldman Sachs of Universal Studios Japan. Faced with low visitor counts, the private equity owners boosted traffic by bringing in popular attractions such as a Harry Potter-themed musical show. US media giant Comcast then acquired Universal Studios Japan in two tranches in 2015 and 2017 for a total of $3.8 billion (including debt), ultimately netting some $1.4 billion for MBK’s investors. 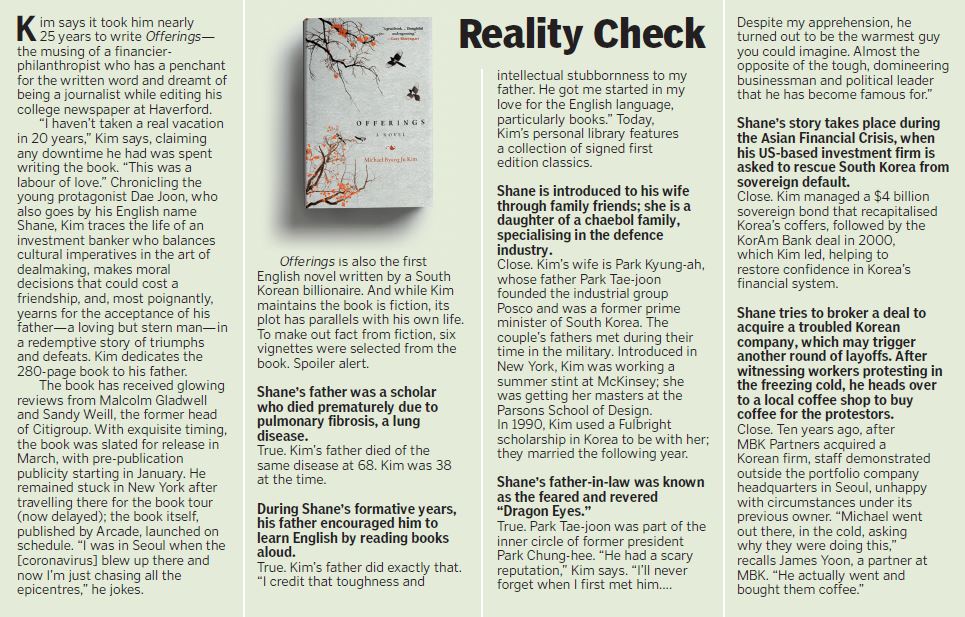 MBK solidified its position with the $1.6 billion acquisition of ING Insurance Korea in 2013, amid doubts that it could run an insurance business. Four years later, ING went public, at a valuation of some $2.4 billion—the first company wholly owned by a private equity firm to list on the Korean exchange. In 2015, Kim scored South Korea’s largest buyout deal by value: The $6.1 billion acquisition of Tesco’s Korean subsidiary Homeplus, beating out rival bidders KKR and Carlyle.

Alongside his successes, Kim has given back, setting up the MBK Scholarship Foundation in 2007. It is one of the first non-profits in South Korea to award educational grants on the basis of financial need as opposed to merit-based scholarships. More than 130 MBK scholars to date have received full tuition to attend the country’s universities.

While Kim has plenty to boast about, he believes in the need to stay grounded. “I always thought the success I’ve had is due to some talent, yes, hard work, yes, but it’s also due to luck,” Kim says. “Recognition of that is critical to giving you a sense of reality, and it’s from that recognition that you get humility.”