After his partner dropped dead in his hotel room, globe-trotting financier David Stickler found himself at the helm of a steel mill startup in rural Arkansas. Now he runs the best little high-tech, highly leveraged steelmaker in the nation 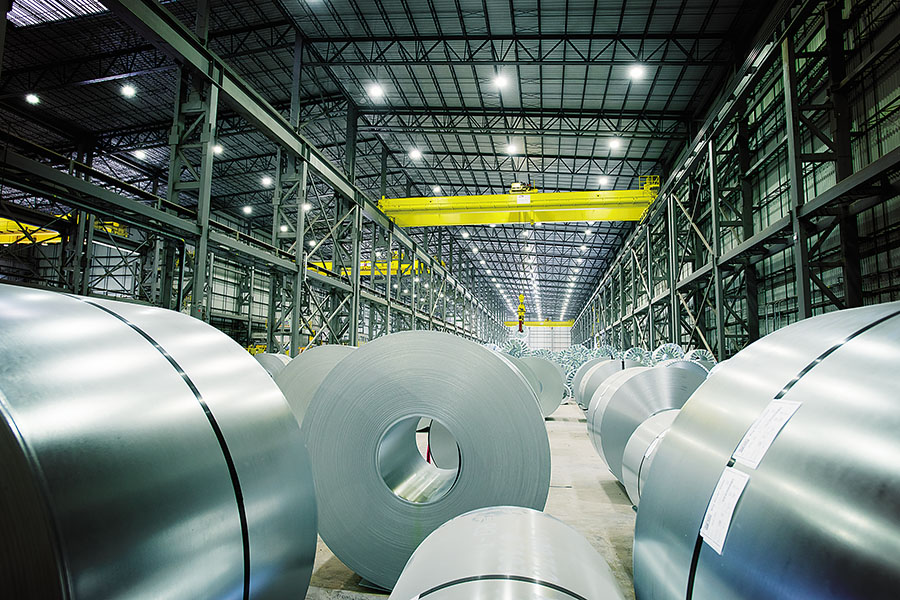 Inside cavernous blue hangars set on 1,100 acres of what was once soy fields abutting the Mississippi River, a succession of 300-tonne scrap-filled buckets—the remains of old cars and refrigerators—await their turn at the furnace. Wailing sirens pierce the deafening rumble, and sparks fly as blindingly yellow flames rise up from the glowing ladle. Overlooking the action there’s a control room with a lone operator in front of a dozen LCD monitors displaying graphics representing data from thousands of sensors on nearly every piece of equipment in the 1.76-million-sq-ft flat-rolled steel mill. One display uses an optical emission spectrometer to analyse the composition of the molten steel in real time, determining the amount of alloys like copper in the mix. A red display shows that the furnace—no more than 60 feet away—is at 2,951 degrees Fahrenheit. Welcome to Osceola, Arkansas (population 6,764), onetime home of legendary blues guitarist Albert King and headquarters to Big River Steel, the future of steel production on the planet. The mini mill, which is producing 4,500 tonnes of hot-rolled steel each day or about 1.65 million per year, began operating only 31 months ago thanks to almost $1 billion in high-yield-debt financing, a slug of equity from Koch Industries, Arkansas’s teachers’ pension fund, private equity firm TPG Capital and the sheer operating zeal of a little-known investment banker named David Stickler. “We view ourselves as a technology company that just happens to make steel,” says Stickler. Though tiny relative to North Carolina’s Nucor, Big River is hands down the most technologically advanced and fastest-growing steel producer in North America. With only 513 employees, its cash flow per employee amounts to a whopping $557,000 compared to integrated producer US Steel’s $61,000. The next most efficient mini mill competitor, Steel Dynamics, operates at $253,000 per employee. It takes just one hour for Big River to produce a 35-tonne coil of hot-rolled steel compared to days at an integrated steel producer. 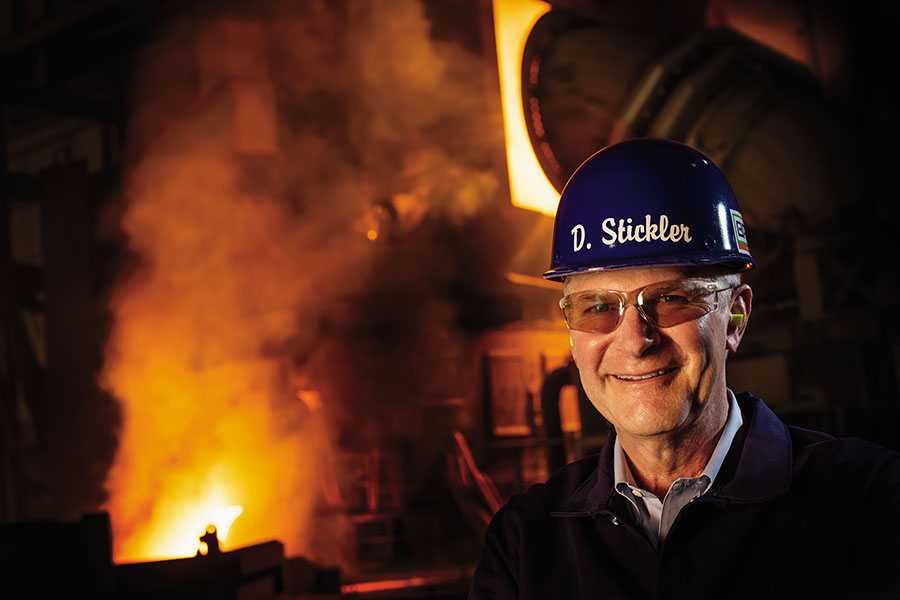 Man of Steel: CEO David Stickler believes his little Big River mill can outproduce the most efficient plants in places like China

Including bonus pay, the average Big River production worker earned $129,000 last year, 3.5 times the median household income in Arkansas’s Mississippi County. Big River has already secured enough financing to double its capacity to 3.3 million tonnes by the end of 2020. Back in the control room a monitor flashes, automatically recommending a modification to the operating parameters. “Ultimately, the operators won’t have to do anything. The machines will adjust themselves,” says Stickler, 58, noting that the information from his sensors is being transmitted to a data centre where an artificial intelligence system developed by Noodle.ai and Dell runs predictive algorithms. Stickler likens his mill to a self-driving car. “The Google and Apple cars, the more they drive, the more they learn. The more this mill operates, the more it’s learning.” Stickler’s transformation from banker to steel company CEO wasn’t planned. A Cleveland native and former accountant, he spent 15 years as an investment banker, mostly working on financing big steel, including the $385 million Bain & Co used to launch Indiana’s Steel Dynamics. In the mid-1990s he met his future wife, Rebecca Li, a vivacious Chinese wellness consultant who was showing a friend Hawaiian real estate. Li helped him make connections in Asia, and in 1998 he raised $650 million to build a mill in Thailand. Stickler also courted Nucor’s CEO, John Correnti, who tapped him in 1999 to finance a restructuring of Birmingham Steel. In 2003, Correnti, Stickler and Li formed Global Principal Partners, a steel-focussed merchant bank. Over the next decade, the firm raised some $6 billion for numerous projects ranging from modernising a mill for Tangshan Steel in China to SeverCorr, a Mississippi mill it sold to a Russian steel giant in 2008. Correnti handled plant operations, and Stickler and Li, the dealmakers, travelled the world and maintained homes in New York, Los Angeles, Beijing and Thailand. Around 2013, Correnti and Stickler decided that their next project would be a new US-based state-of-the-art electric mini mill. “There was somewhat of a revolution under way,” says Stickler, noting how US makers were rapidly losing global market share.  After getting incentives and funding from Arkansas and local municipalities, Stickler chose Osceola, a small town about 50 miles north of Memphis, downriver from massive scrap metal yards in cities like Chicago, adjacent to Burlington Northern rail lines and close to major trucking routes I-40 and I-55. Entergy offered it rock-bottom power rates through 2026.  However, 13 months into the construction of the mill, in August 2015, Big River CEO Correnti died in his sleep. “My plan was not to be CEO,” says Stickler. “John passed away on a Tuesday. By Friday of that week, we had completely reorganised.” One of Correnti’s strategies that Stickler boasts about is Big River’s Wall Street-style bonuses. The majority of mill workers have production bonus targets amounting to 150 percent of their wages, so a technician earning a base of $18 per hour is expected to take home at least $45 an hour. “We’ve had weeks where people are getting paid a bonus of 180 percent, 200 percent or even 210 percent,” says Stickler. 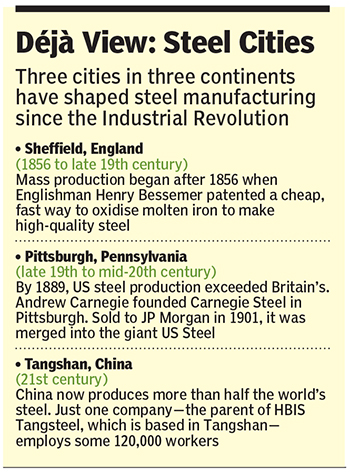 Another differentiator at Big River is its LEED (Leadership in Energy and Environmental Design) certification. “Typically it’s for university and government buildings,” says Stickler, who believes it will make the difference whether it is selling to Chrysler, Volkswagen or Walmart. “People won’t pay more for our steel because it’s produced in a LEED-certified facility, but everything else being equal: Price, service, quality, etc, we get the order,” says Stickler. Last year, thanks to a strong backdraft created by Trump’s 25 percent steel tariffs and fear of shortages, prices hit a ten-year high, allowing Big River to book revenues of $1.4 billion. “I’m not okay with tariffs,” retorts Stickler. “Trump has given the domestic steel industry an opportunity to get itself on the right path. But we don’t need tariffs to survive and thrive.” If there is one big question mark surrounding Big River’s future, it may be its ability to thrive under its $1.5 billion debt load. In May, the steel startup got the Arkansas Development Finance Authority to lend its name to $487 million in 30-year junk municipal bonds to finance expansion. According to Moody’s, the bonds will boost the company’s leverage ratio to a risky 6.8 times and drop its interest coverage ratio to one or less. A ramp-up in global production has created a glut in flat-rolled steel, and prices have fallen by 25 percent in 2019. But Stickler seems unconcerned. He’s gearing up for another $500 million debt/equity financing that will enable Big River to manufacture the specialised steel that goes into hybrid and electric cars. The dealmaker in him knows that he will likely be able to flip Big River­—at big profit—long before its debts come due. Last summer in fact, Nucor reportedly offered as much as $3 billion for Big River, but Stickler rejected the deal. Thanks to assistance from his wife, Big River has been hosting tours for dozens of visiting company executives from around the world. “We don’t hide behind patents and IP,” boasts Stickler. One notable group was a team of executives, including its chairman, from the second-largest steelmaker in the world, China’s state-owned Shanghai Bao Steel, that produces about 45 million tonnes a year. A beaming Li says, “They told David he was the Steve Jobs of steel.”

Tweets by @forbesindia
Could bringing your "whole self" to work curb unethical behavior?
Good news: Fewer children are dying, across the world