FreedomPop is trying to do to the wireless industry what Skype did to the long-distance business. Hey, it worked once 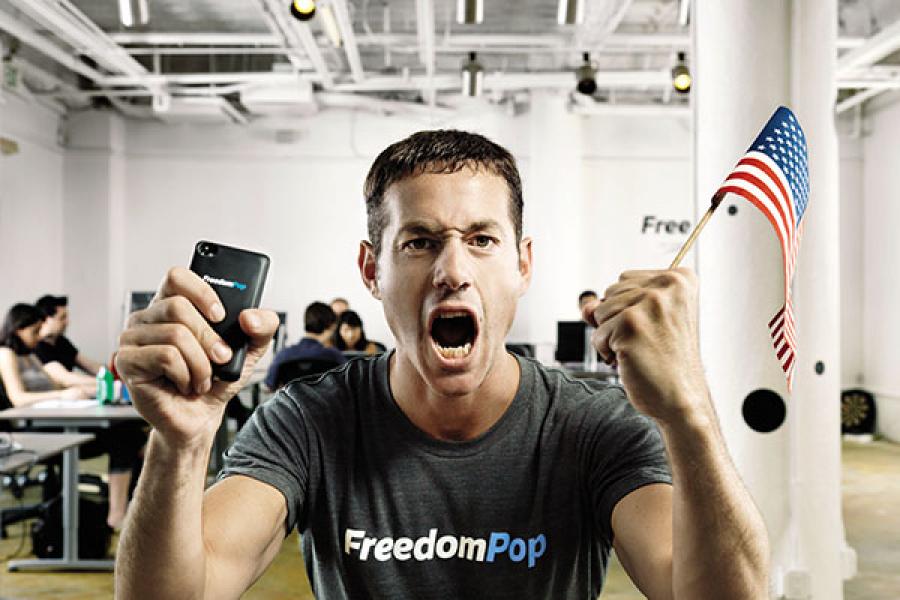 In the middle of lunch over sushi near his West Los Angeles office, Stephen Stokols’s phone buzzes with another email, bringing a smile to his face. The founder and CEO of FreedomPop has just received another batch of smartphones, used ones, to arm his company in its wild plan to upend the mobile industry. “It’s like American Gangster,” he jokes. “We’re sucking up all the inventory.”

In his rapid-fire delivery Stokols sketches out his plan to take on the big telecom carriers by offering no-contract phones with a generous tier of service at no charge. It’s the opposite of the telecom industry, which spends big marketing dollars and hefty phone subsidies to lock people into expensive multi-year contracts. Stokols knows the business well; he used to be a senior executive at British Telecom.

Within the next few months FreedomPop will begin selling refurbished HTC EVO 4G Android phones—and potentially Samsung and LG handsets—for $99 to $199, with no contract, and give away 500 megabytes of 4G data per month, plus unlimited texting and 200 anytime call minutes, as well as unlimited calls to other FreedomPop phones. FreedomPop plans to sell two or more gigabytes of data starting at $18 a month and an upgrade to unlimited calling for $10 a month. Compare that with a ‘Share Everything’ Verizon iPhone plan that nicks you for $40 a month for unlimited voice and text plus $60 for 2 gigabytes of data. Thus, FreedomPop will charge $28 for what Verizon offers for $100. But the average American consumer uses about 200 minutes of voice and 500 megabytes of data per month, so the lower 50 percent of FreedomPop’s customers won’t be paying a dime.

So how can Stokols afford to give away wireless service? Thank the wonders of technology. FreedomPop converts all voice calls into data packets (much the way Skype does on PCs) and runs them over bandwidth purchased wholesale from Sprint’s network. The cost of wholesale data is one-fourth to one-fifth the price of renting voice minutes, and calls use a relatively small amount of data (a three-minute call requires only 500 kilobytes). The voice quality of FreedomPop’s calling app is often superior to regular cellular service. I tried it and was impressed. In the future, says Stokols, all the big carriers are going to move their voice calls over to data networks.

Stokols began validating his freemium model eight months ago when FreedomPop rolled out its first devices, such as a 4G USB stick, a Mi-Fi-style personal hotspot and a sleeve attachment that turns an iPod Touch into an internet phone. FreedomPop has hundreds of thousands of accounts, and Stokols expects to sell millions of units by the end of next year.
FreedomPop entices new customers with the free plan but then plies them with a host of $3.99-a-month service offerings such as faster download speeds, monthly rollover of unused data and device insurance. More than 45 percent of its customers now pay something, either via monthly plans (25 percent of customers) or added features (28 percent). These add-on services have 90 percent gross margins.

FreedomPop’s closest competitor is Republic Wireless, which has $19-per-month service but uses a proprietary Motorola handset, not popular Android models, and runs only on 3G. Republic’s unlimited plan is $29.99 versus FreedomPop’s $11.99 unlimited plan.

Sprint isn’t worried about FreedomPop competing with its retail business, says Matt Carter, president of Sprint’s wholesale business. “FreedomPop provides another flavour out there in the marketplace.”

But other carriers are not as chuffed. Stokols says that at the CTIA trade show last year he got yelled at by a T-Mobile executive, who accused him of undercutting the industry. “There’s a duopoly at the top of the industry,” says Pete Moran, general partner at FreedomPop investor DCM. “They’re able to maintain extremely high prices and frankly haven’t been bringing interesting new concepts and change to the industry.”

Mark Tluszcz, co-founder of venture firm Mangrove Capital Partners and an early investor in both Skype and FreedomPop, sees clear parallels between the firms. “When I invested in Skype, that was all about making phone calls cheap. People were tired of being ripped off by telcos. Now voice has become a commodity. What’s not is data. That’s where telcos are greasing themselves.”

Stokols and co-founder Steven Sesar are drawing on proven social marketing tactics and ideas from their last startup, dating site WooMe, to build a business on the cheap. Anyone with a FreedomPop device can share minutes with another user, which cements loyalty and boosts usage. People also get free data rewards when they sign up friends to  FreedomPop. The company generates 17 invites on its site from each subscriber—a powerful viral pull. Stokols says 98.5 percent of all new accounts have signed up by word of mouth. He keeps his equipment costs low by scooping up a trove of ‘like new’ models from recycling sites such as Glyde and Gazelle. AT&T and Verizon, in contrast, spend upwards of $500 for new data customers once you include equipment subsidies and marketing costs, says Jonathan Chaplin of New Street Research.

When Stokols and Sesar first pitched the idea, investors were sceptical. They were worried that consumers would bleed the company dry by staying only within the free plan and were aware of the hundreds of millions flushed away on defunct wireless-service resellers such as Amp’d, Helio and Zapp. It was a “sh--load of risk”, Stokols says, even though FreedomPop got 25,000 emails from interested customers after its first press mention in December 2011.

To mitigate its investors’ risk, FreedomPop split its initial equity round into two tranches, one before and one after the company released its first devices in October. In its first month, FreedomPop converted 5 percent of customers from free to paid. In month two, the number rose to 10 percent and hit 20 percent by month three, well ahead of projections, with new sign-ups accelerating along the way. The investors were confident enough to complete the full $8.8 million round.

There have been stumbles. FreedomPop’s iPhone case, which allows people to switch their data or voice from their carrier to FreedomPop, has been stuck in port due to an FCC approval delay. But Stokols says the company has learnt from that and is now working with Sprint on a new approach to data devices. “We’re using innovative technology and a new model to change the market dynamics,” says Stokols. “That puts more money in consumers’ pockets and less in the Verizons of the world.”