While many bank on AI paying off in the future, one of the world's hottest apps, Hopper, has raised $84 million by monetising it right now 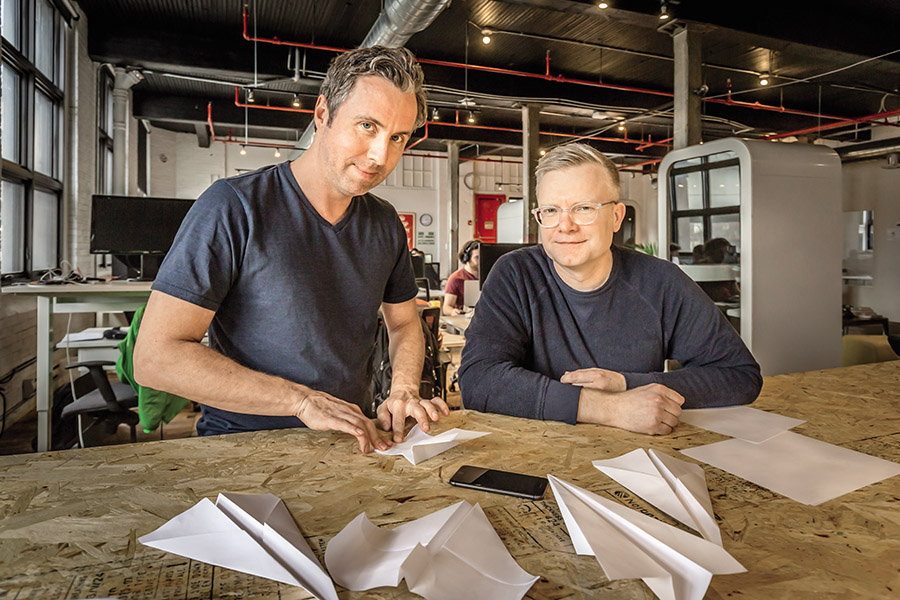 Flight planners: Co-founders Lalonde and Ouwerkerk envision Hopper as an always-on “leisure companion,” automating how people find new activities locally and on vacations
Image: Franco Vogt for Forbes
One of the most cutting-edge travel apps in the world makes its home in a decidedly old-fashioned setting: an active zinc factory in Montreal’s former garment district. Walking through a maze of sputtering machines and chemical vats, Fred Lalonde, founder and CEO of Hopper, the world’s fastest-growing flight-booking app, explains why he has rented the space since 2009. “As bad as this place looks, it was probably the smartest place to start a data center,” he says. The building is powered by a hydrodam, part of a Canadian system that delivers a supply of cheap electricity and a perfect match for an energy-hungry startup making a big-­data bet: that AI-driven recommendations can make travel more affordable and personalised than what people can craft for themselves.

Unlike most other travel sites, which generally want you to book right away, Hopper is predicated on patience. “Think of an e-commerce site that tells you 70 percent of the time, 'Don’t buy,'” says Sophie Forest, a partner at Brightspark Ventures, the startup’s first investor. “Hopper is that anomaly.” Aimed primarily at the leisure-travel market, the app uses a sophisticated algorithm to predict the best deals and times to fly and buy—alerting users at the optimal moment, well before prices go up or down by specific amounts.

Since its launch in 2015, Hopper has become the most formidable newcomer in an $800 billion flight market dominated by Expedia, Lalonde’s former employer, and Booking Holdings (previously called Priceline), and now boasts more than 20 million users.

In January, Hopper was the fourth-most-downloaded travel app in the US, after Uber, Lyft and Airbnb. The 120-person company, led by Lalonde, 44, and co-founder and CTO Joost Ouwerkerk, 46, generated about $15 million in revenue last year by selling flights, almost entirely through push notifications.

Customers buy more than $1.5 million in flights per day across more than 300 airlines, and give Hopper a $5-per-ticket fee (airlines pay a 1-4 percent commission). Hopper says customers save an average of $50 per ticket and claims its airfare forecasts are 95 percent accurate up to a year in advance. Meanwhile, Kayak predicts flight prices only seven days out, and many competitors, such as Google, indicate whether prices will go up but not whether a better deal is coming.

Experiments were part of Lalonde’s childhood in Quebec City, where his father, a biologist, regularly brought home new computers, which Lalonde used to learn to programme. Instead of attending college, he moved to Los Angeles in 1993 to start an online airfare-ticketing company called Travel Online before the launch of Expedia. Unable to raise funding, he moved at age 23 to Montreal to be with his girlfriend (now wife), novelist Dominique Fortier. Soon after, he built Newtrade Technologies, which replaced faxes between hotel reservation systems and booking sites with software; it was acquired by Expedia in 2002.

As an Expedia executive overseeing hotel products and deals, Lalonde was struck that there weren’t better ways for people to discover places, not just prices. In 2006 he left to build a destination site, taking Ouwerkerk, Expedia’s product manager, with him. For the first few years, they lacked the capital to build powerful servers but began making deals to collect flight-price records and travel data. In 2011, Series A funding enabled them to build a long-term data center. By 2013 they had enough data to start building algorithms. Hopper.com launched the next year.

Traffic soon flooded the website, but people were interested only in one small section: flight forecasting. Lalonde realised users didn’t want to pick a destination until they knew flight costs and decided to shut down the website to work exclusively on airfare prediction. His other key directive: Hopper would exist only on mobile. In 2015, Hopper released its app.

Hopper has raised $83.6 million in venture funding from firms such as Accomplice and Omers Ventures (the company was valued in late 2016 at about $300 million), and it’s poised to become much larger. Purchases driven by AI—for example, suggestions to travel on different dates or to different locations—now drive 25 precent of sales, up from 5 percent in November. The AI knows, for example, that Hopper users watching a flight from New York to Hawaii are more likely to end up purchasing a flight to the Caribbean. Over time, Lalonde expects AI to generate 75 percent of purchases.

“If I’m watching a trip for a family of four in Salt Lake City in February, Hopper knows, ‘Oh, I want to ski’,” says Jeff Fagnan, a partner at Accomplice. “What happens if I shift you to Denver instead for $100 less? They’re changing the whole supply-and-demand curve of the industry.”

In late 2017, Hopper extended its forecasting and booking tool to hotels, likely an even larger business opportunity. The app offers over 200 hotels, typically sold at a 10-15 percent discount in five major US cities, and aims to make hotels available in 15 more cities in the next six months.

Today Hopper is focused on international growth (users can buy flights in more than 160 countries) and adding hotels. Lalonde expects head count to double to more than 200 people by the end of 2018, mainly in data science, engineering and customer service. In a world that’s becoming more isolationist, Lalonde thinks Hopper can make travel cheaper and more convenient.

“Our AI is getting people to start shopping earlier and buy things they didn’t know they wanted,” he says. “We’re no longer just a better mousetrap.”