As the first woman to run a big American oil company, Vicki Hollub has quickly made Oxy leaner, smarter, gentler—and poised to gusher cash for the next half-century 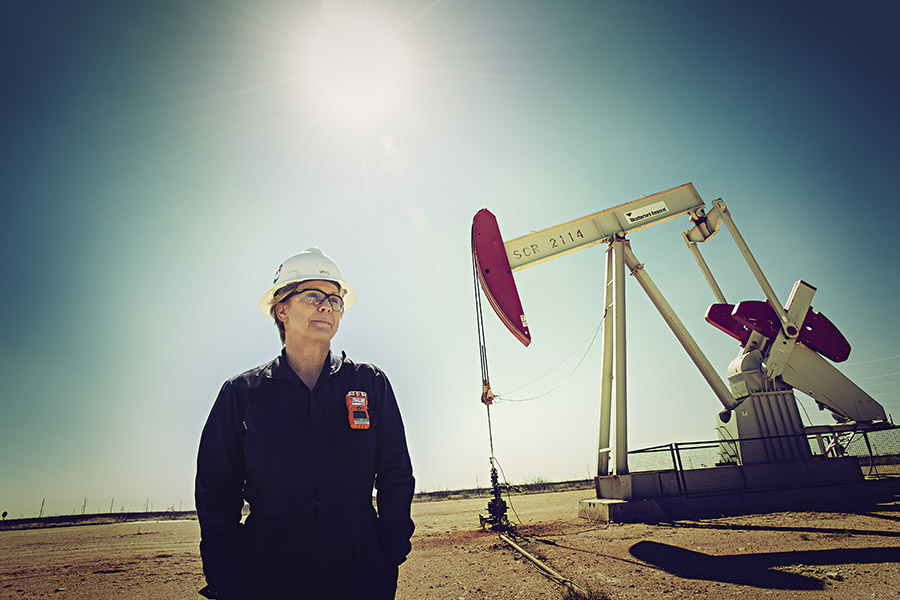 South Curtis Ranch is an 11,000-acre ‘unit’ that Occidental Petroleum operates in the Permian Basin, a 300-mile swathe of West Texas and southeastern New Mexico that produces a quarter of America’s oil. Here, cattle placidly masticate as hundreds of 20-foot-tall ‘nodding donkeys’ suck up oil and gas from deposits 2 miles down. Oxy’s pumps are grey with red tops—a well-­gauger might describe his day as having been spent “chasing redheads”. North winds whip up dust from truck tyres crunching on the work roads. A storm-chasing group issues a flaming-tumbleweed warning. That’s no joke to Vicki Hollub, the chief executive officer of Occidental. Just 5-foot-5, Hollub strides with authority to a lineup of nervous roughnecks, all men. She shakes hands and listens intently as the foreman recites the safety briefing. Everyone wears steel-toe shoes and flame-retardant coveralls. Hollub refuses a photographer’s request to take off her hard hat and safety glasses for a few pictures. “Not going to happen,” she says, tucking blonde hair under the rim.

Hollub, 57, feels at home here. A decade ago, she was running Oxy’s entire one-million-acre Permian position. The work consisted mostly of injecting carbon dioxide (CO2) into 100-year-old shallow, conventional fields to coax out the more stubborn oil. Then came advances in directional drilling and hydraulic fracturing that enabled oil companies to unlock deeper, trickier oil-soaked rock. Output from the Permian has doubled in the past five years to 2.5 million barrels a day (bpd), with hundreds of new rigs deployed even in a world of $45 oil.

Oxy is the biggest producer in the region, at 270,000 bpd—half the company’s worldwide total. Hollub says it will double that within a dec­ade. “It’s pretty hard to drill a dry hole there. We don’t have to explore to find it. It’s just a matter of engineering the right way to get it out.” The geology is so stacked with oil layers that it’s like having ten fields in one—a petroleum layer cake. “We know Oxy has more than 50 years of reserves left,” she says.

Hollub presides over an all-new Oxy that has gone all-in on the Permian. In an unforgiving “portfolio optimisation” that sought to undo the excesses of former CEO Ray Irani, Oxy shed 25 percent of its assets, including less cost-effective fields in North ­Dakota, Colorado, Kansas, Oklahoma, Iraq, Libya and Yemen. In 2014, Hollub orchestrated the ­spinoff of California Resources Corp (CRC), which took all of Oxy’s assets in that state, including Elk Hills, which produces half of the Golden State’s natural gas. In the process she also loaded CRC with $6 billion of debt. She even sold off Oxy’s lavish Los Angeles headquarters for $93 million and consolidated offices in Houston. (She lives with her husband on Tiki Island, near Galveston, Texas.)

Half of Oxy’s output now comes from Qatar, Oman, Abu Dhabi and Colombia. The other half is Per­mian. “Now every dollar we invest is in a quality asset,” Hollub says.

Like supermajors Exxon Mobil and Chevron, Occidental has a vertically integrated operation at Hollub’s disposal, at least in Texas. Oxy’s pipeline network carries oil down to Corpus ­Christi, where the OxyChem division operates chemical plants and a new terminal for supertankers built on a former naval base. “We’re integrated like a major, pay dividends like a major, but we’re small enough that we can still generate solid growth,” Hollub says. Oxy produced $117 million of net income in the first quarter on $3 billion in revenue, when oil ­prices averaged $51 a barrel. In 2016, with oil around $40, Oxy posted a net loss of nearly $600 million. But Hollub says, at $45 Oxy can increase production. That’s a far lower breakeven than you’d get from deepwater drilling in the Gulf of Mexico, and it also beats fracking in once-hot places like North Dakota, where the Bakken Shale is only a fraction as thick as the Permian layers. If oil prices return to their 20-year, inflation-adjusted average of $60, Oxy is poised to make $1.5 billion in net profits. Put another way, for every dollar in higher oil prices, about $100 million drops directly to Oxy’s bottom line.

If oil prices return to $60 a barrel, Oxy is poised to make $1.5 billion in net profits

It was no dumb luck that Oxy already had a giant position in the region before ‘Permania’ took hold of the oil industry. Hollub is executing a strategy put into place nearly two decades ago by Stephen Chazen, her predecessor as CEO, who was convinced that the best place to find new oil was where it had been found before. In 1998, Oxy acquired the old Elk Hills oilfield near Bakersfield, California. It followed that up with the 2000 purchase of Permian-focussed Altura Energy for $3.6 billion. When Oxy bought Altura, it paid only for the old, depleted conventional fields, which were being kept alive via injections of pressurised carbon. But there was more to it than that, says Chazen, who at 71 has spent three ­decades in the oil business.

“When you do a deal, the goal is to get free options. That is, things that might turn out but you don’t have to pay for them.” The Permian is the king of optionality. All those deeper layers of oil-soaked rock with names like Wolfcamp, Avalon and Bone Spring were seen as worthless, Chazen says. “We paid for the CO2 business, but we got multiple prospective target zones for free.” Oxy didn’t even know how to drill those targets in 2000. But it does now.

Oxy’s 25,000 wellbores in the Permian have lots of ‘jewellery’ on them—sensors that measure, for instance, how flow rates respond to ­changes in atmospheric temperature and pressure. That big data feeds artificial-intelligence software that guides drill bits horizontally into the thickest zones of oil-soaked rock. Thanks to better technology and better fields, Oxy has reduced its total cost per barrel (including overhead, capital and operating costs) by more than half, to just $28.

It’s been a bold transformation for one of America’s most unusual companies. Oxy’s founder, Armand Hammer, was the Bronx-born child of Soviet sympathisers. He made his first fortune trading medicine, grain and pencils to Lenin in the 1920s. Hammer founded Oxy in 1956 and during the Cold War became an infamous back channel between the Kremlin and the White House. He also used his diplomatic charms to win lucrative oil licences around the world.

At Hammer’s death in 1990, Oxy’s fate fell to his handpicked successor, Ray Irani, an imperious chemical engineer who carried on Hammer’s global gallivanting and landed megadeals with the likes of Qatar, Oman and Libya. Irani was the highest-paid CEO of his day, maxing out at $460 million in 2006. His lavish Beverly Hills lifestyle made Irani the living incarnation of corporate greed—but he made shareholders rich, with Oxy shares returning 2,000 percent over Irani’s 20-year tenure, roughly four times better than the S&P 500. Running the show behind Irani was Chazen, a former investment banker who had disarmed mines in Vietnam. He also had a PhD in geology. Low-key and subtle, Chazen found Irani embarrassing. In 2011, the Oxy board could no longer ignore the outrage over Irani’s pay, so they made Chazen CEO but left Irani as chairman. Irani refused to relinquish his grip. In 2013, after duelling proxy votes, shareholders booted him. Irani’s cumulative compensation: $1.2 billion. At last, Oxy could get on with selling assets. Chazen promoted Hollub to president and sent her to spearhead the California spinoff. She took over the CEO job in early 2016.

Hollub grew up loving Alabama football and idolised its legendary coach, Bear Bryant. At Tuscaloosa Hollub’s freshman ambition was to play French horn in a symphony, but an instructor broke it to her that she was good enough only for the Crimson Tide marching band. “It was a real blessing he was so honest with me,” Hollub says. Watching Bryant transformed her. “It wasn’t about winning single games,” she says.

“The coaches were only comfortable winning national championships. It’s a culture and an attitude of not settling.” She considered mine engineering until she took a field trip down one of Alabama’s mines. “It was claustrophobic, cold, wet. I never wanted to do it again.” The next trip was to an oil rig. “I was 18 years old and thought that was so cool.”

After graduating, she worked on rigs in Mississippi and made the three-hour drive back for home games.

In 1982, Occidental bought the company she worked for, Cities Service. She never left. Hollub led teams in Venezuela and Ecuador. “I was surprised at the opportunities I got,” she says. When she landed in Russia, “I found out I was there because a lot of other people didn’t want to go.” Football helped her endure tough jobs in a male-dominated industry. “It was the one thing we could always talk about. It broke down barriers.” Now Hollub is one of just 28 women running S&P 500 companies. “I don’t like the term ‘role model’. What I do feel is, I’ve been fortunate. Without football and help along the way from some key men, I wouldn’t be where I am today.”

As the downturn took hold in 2015, Hollub made a big decision: Cut assets, not people. Oxy would axe contractors, sure, but not employees. Hollub saw it as a way to heal the Oxy culture in the wake of its post-Irani upheaval. Millennials got sent to the field instead of the chopping block. Jenny James, a 26-year-old petroleum engineer, worked 16 months on a rig in Pecos, Texas, living in a “man camp”. Does she care that Oxy’s CEO is female (as are the general counsel, midstream president, controller and head of external relations)? “It shouldn’t make a difference,” James says, “but it’s still really exciting.”

It’ll be even more exciting when oil prices go up. At an average oil price of $50, Oxy figures, it can generate $5.6 billion in cash a year, enough to support $3.3 billion a year in capital investment plus $2.3 billion in dividends. Shares yield 5 percent. Hollub considers the payouts—raised for 12 years straight—to be sacred and good for fiscal discipline, which makes Oxy a solid choice for any timid oil bull. “Just as the Permian Basin will be the last basin standing, so Occidental will be the last company standing.”