How Toyota got its mojo back

Two decades after the Prius jump-started the green car revolution, Toyota lost its eco-mojo to Tesla. Now the world's sixth-most-valuable brand is fighting back with the hydrogen-powered Mirai 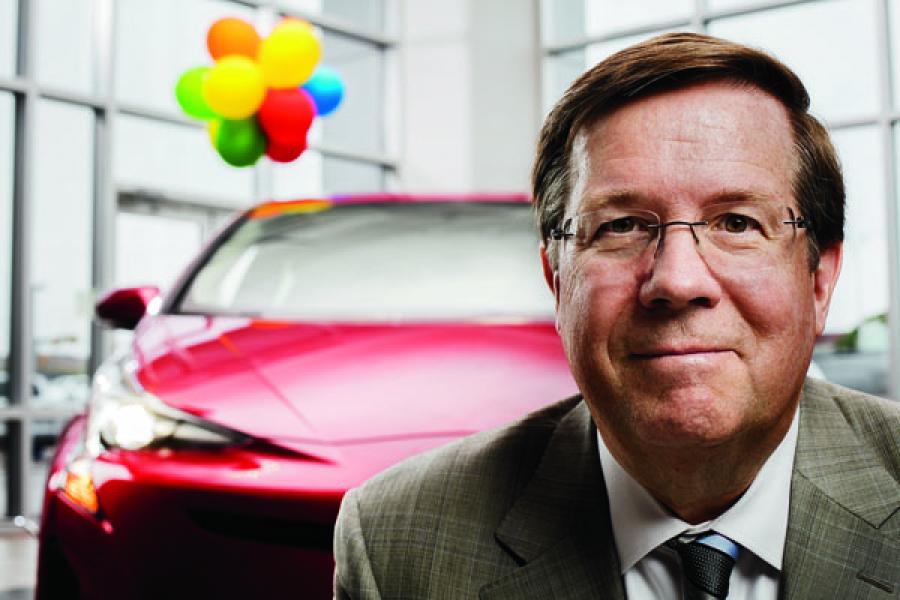 At a swanky Tokyo hotel in 1997, as birds flitted across the sky on giant video screens, Toyota Motor introduced the Prius to the world. It wasn’t exactly sexy: A funny-looking compact sedan with ­itty-bitty wheels and a sloping nose. But under the hood was something new: A 1.5-litre, four-cylinder engine mated to an electric motor, fed by a 274-volt battery stuffed under the rear seats.

As new car introductions go, this one was bigger than most, as the Japanese automaker saw the Prius as an opportunity to cast itself in a new light. Famous for quality, affordability and reliability (its brand is worth some $42 billion), Toyota hoped the introduction of a hybrid gas-electric car that cut pollution and got a then eye-popping 45 miles per gallon on the highway would green its image.

Back in America no one cared. Gas was about a buck a gallon, and people were more concerned with finding parking spaces for their mega-SUVs than with saving a couple of pennies at the pump. The media reaction was harsh. “Everybody called it a science experiment and said, ‘Why would you put two power trains in a car?’ ” recalled Bob Carter, now senior vice president of automotive operations for Toyota Motor Sales USA.

Toyota, of course, had the last laugh. It has sold 8.5 million hybrid vehicles, including 5.4 million Priuses, far more than any other automaker. The lesson: Don’t bet against Toyota.

Like Tesla’s cars, the Mirai is powered by electricity, but instead of storing energy in a battery, it creates electricity on demand. Oxygen from the air and hydrogen stored in high-pressure tanks under the seats are pulled into a fuel-cell stack, where a chemical reaction occurs, creating electricity to power the motor. The Mirai’s benefits are numerous: It emits only water; it can be refuelled in about five minutes (versus several hours for a traditional electric); and it has a range of 312 miles, comparable to a gasoline-powered car.

“Consumers, while I think they love the idea of a high-tech car that’s very green, they still want a car that acts like what they are driving today,” said Jim Lentz, chief executive of Toyota North America. “Being able to pull up to a fuelling station and fill the tank in five minutes is a huge plus” for hydrogen-powered cars, he said. “Even supercharging of EVs isn’t realistic. You have to wait 30 minutes.”

Yet the Mirai, on sale since last summer, isn’t getting a lot of traction in the market. The lack of hydrogen filling stations is a huge problem compounded by the technical and regulatory issues involved with transporting hydrogen, which is highly explosive and less stable than gasoline. There are only 16 retail hydrogen filling stations in the US, a number that should grow to more than 30 by year’s end.

But Toyota is also facing a more fundamental branding problem: For all its leadership in developing cleaner cars, the company isn’t commanding the green spotlight anymore. Instead, Elon Musk’s Tesla Motors is setting the pace.

“When you talk about electric cars, most people jump to Tesla. When you say autonomous, everybody talks about Google,” said Jez Frampton, global chief executive of Interbrand, a New York-based brand consultancy. “The car industry has all the capability to beat these upstarts. And yet they seem to have grabbed people’s imagination. That lays a significant challenge at Toyota’s doorstep.”

“Twenty years ago, being the brand that never let you down meant something,” said Karl Brauer, a senior analyst at Kelley Blue Book. “But what got them here—quality and being green—is not a differentiator anymore.”

The company hopes to sell 3,000 Mirai sedans by the end of 2017 and 30,000 by 2020. Even if it sells at the top of its projections, the Mirai won’t move the needle on Toyota’s $248 billion in annual sales. But since it was developed over many years in tandem with the Prius—and shares much of the same technology—it didn’t break the bank to launch, either. To help spur the industry toward hydrogen-powered cars, Toyota took the rare step of offering its 5,680 fuel-cell patents to competitors—for free—until 2020.

But without refuelling infrastructure, fuel-­cell cars are going nowhere. California has pledged $200 million for hydrogen-­station development over the next several years. To kick-start construction, Toyota loaned $7.3 million to First Element Fuels to build 19 stations in the state and teamed up with Air Liquide on a network of 12 stations in the Northeast. (Honda, which is launching its Clarity fuel-cell sedan later this year, loaned an additional $14 million to First Element.)

“We had hoped we’d be further along,” said Lentz, who is trying to tamp down demand until the infrastructure is ready. “We’re telling customers to delay delivery if their station isn’t open. I don’t want people to have a bad experience.”

Tesla’s Musk has been quoted as dismissing hydrogen-based cars as “fool cells”.

But here’s another scenario: Maybe Toyota is the industry’s true disruptor. With a nest egg of about $23 billion and an R&D budget of about $10 billion, Toyota is able to peer far into the future—much farther than cash-strapped Tesla can—and sees that hydrogen generated from renewable sources has long-term advantages over electricity. (Interestingly, neither technology is 100 percent green. Most of the electricity used to power Teslas is generated from burning fossil fuels, and it takes a huge amount of energy to produce hydrogen, either by extracting it from natural gas or by using electricity to split it from water.)

Toyota sees no point in developing battery-electric vehicles for long distances, saying they’re neither practical nor cost-effective, given battery constraints for the foreseeable future. Instead, Toyota is adding more hybrids and plug-in hybrids to its lineup and laying the groundwork for what it sees as the inevitable switch to hydrogen-fuel-cell cars. Its stated goal: Cut 90 percent of all tailpipe emissions by 2050.

If it takes 15 or 20 or 25 years for hydrogen to catch on, so be it. Toyota knows from its experience with Prius that slow-and-steady wins the race.

“At the end of the day,” says Interbrand’s Frampton, “the winners will be the ones who understand customers better than anyone else and, more to the point, can see slightly around the corner.”

Toyota has proven adept at both.