Alan Schaaf transformed a simple file uploader into a viral content empire. Now he has to turn Imgur into a business 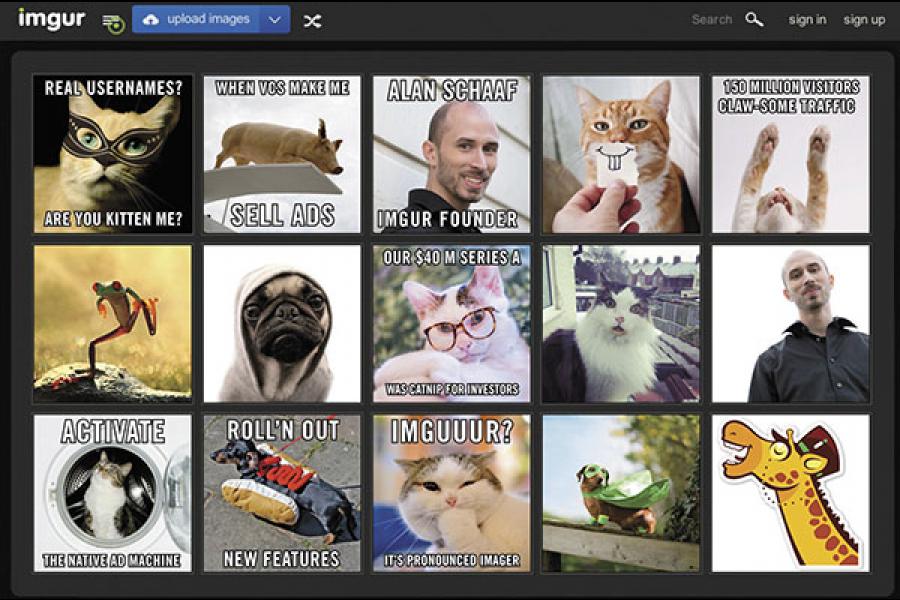 The first thing you notice at Imgur’s new San Francisco office are the giraffes. They’re everywhere: Inflatable giraffes, posters of kissing giraffes, a massive mural of a giraffe donning a monocle and top hat. “That’s our mascot, Imguraffe,” says 27-year-old founder and CEO Alan Schaaf. “It started as an April Fool’s joke when we added a giraffe theme to the site for a day and got emails for six months begging us to bring it back.”

For Imgur—the web host of most of the internet’s memes, GIFs, jokes and tropes—the giraffe is a perfect mascot: Strange, awkward and huge. Each month, Imgur (pronounced ‘imager’) attracts more than 150 million unique visitors, more than 5.5 billion page views and 45 million new images. Since 2009, when Schaaf built the site in his Ohio University dorm, Imgur has become the default launchpad where content is uploaded before blasting off across Facebook, Twitter, Reddit and the blogosphere. But Imgur is increasingly shifting from being an image host to a prime destination of its own. Roughly 30 percent of its audience (largely young and geeky) now views content directly on the Imgur home page and mobile app.

That trend helped Schaaf raise $40 million from the venture capitalists at Andreessen Horowitz in April 2014, after bootstrapping the site for its first five years. “It’s an incredible community,” says Andreessen partner Lars Dalgaard. “Users are building meaningful relationships with people they might not ever see and are finding people that they have more in common with than anyone at work or school.”

Imgur now has to start making real money of all that traffic while dealing with a social network unlike Facebook, Instagram and Snapchat. Imgur’s content isn’t shaped by friends or follows. Everyone sees the same images on the home page, ranked by popular vote. Top posts can get thousands of comments and tens of thousands of votes. “Imgur is a shared experience,” says Schaaf. “I don’t see posts because I follow a certain person but because it was voted up through a democracy.”

Navigating the site feels like channel surfing on public access television: A GIF of a bear playing in hay; a tutorial on how to use a battery and gum wrapper to start a campfire; a visual story of how one Imgur user helped another Photoshop away surgical stitches in a photo of her grandfather. “It’s impossible to go on Imgur for less than five minutes,” says Schaaf. “It’s true discovery. You start without wanting to see something in particular but find stuff you like every single time.”

Schaaf knows what the Imgur horde loves because he is one of them. As a shy and introverted kid growing up outside of Tampa, Florida, he moved to Ohio at the age of 10 and found his community on web forums for games such as World of Warcraft. In high school, he helped run the student IT support team and the school’s website. As a computer science major at Ohio University he got into college radio, hosting a tech talk show and spinning electronic music: “I like to sit in my room, and I communicate out.”

Around this time, he got heavily involved in another platform—the massive web bulletin board Reddit. He loved the site but hated the tedious process of uploading images. “It wasn’t Reddit’s problem but the internet’s problem,” says Schaaf. “I thought, ‘I can do better’.”

Schaaf, at the time a college junior, built an upload tool in two months. It was simple and sparse and could turn pictures into web links with the press of a button. He shared his project with Reddit. It took off—and crashed. He moved to a larger web-hosting service—it crashed that, too. He burnt through four server sites before eventually turning it over to Amazon Web Services. “I had no experience handling traffic, but I had to learn. If I didn’t fix it then, Imgur wouldn’t exist,” says Schaaf, who credits Imgur’s survival on the self-reliance he had learnt from his mom, Jean Hoyt. “She built her own company [real estate appraisal], and when something breaks in the house, like, ‘We need a new toilet’, she installs it.”

Small ads on Imgur covered server fees and the occasional pizza through graduation. Schaaf shrugged off job offers from Facebook and Google to move home and run Imgur out of his bedroom. By 2010, Schaaf was making enough to rent an apartment and hire Matt Strader (an MBA student whom Schaaf met through an Ohio University investment fund) to focus on the business side. In 2011, with Imgur getting 30 million monthly uniques, Schaaf and Strader (now Imgur’s COO) moved to San Francisco and hired four employees.

That number has grown to 45 since the $40 million venture round last spring. Schaaf says he’ll hit 90 employees by the end of the year as Imgur attracts a more mainstream audience through its new iOS app, launched in March. Plans are afoot to jump to web-connected TVs. Says Andreessen Horowitz’s Lars Dalgaard: “This is amazing content that is not being seen by even a percent of the people who’d be elated and ecstatic if they knew it existed.”

The bulk of Imgur’s revenue today comes from the single ad on each page. To fuel more growth, Imgur is building an in-house agency that will create and publish branded images, so-called native ads, designed for viral sharing. Schaaf says these ads will mesh with the style and tastes of the site. Test campaigns for films and games (Grand Theft Auto V) were a hit with users, with some ads getting liked and shared by an average of four percent of the audience. Imgur must tread lightly. Online clans, especially those emboldened by their anonymity, can protest viciously about commercials in their feeds. “The most valuable thing about Imgur is the community,” says Schaaf. “Only we can take the community away.”