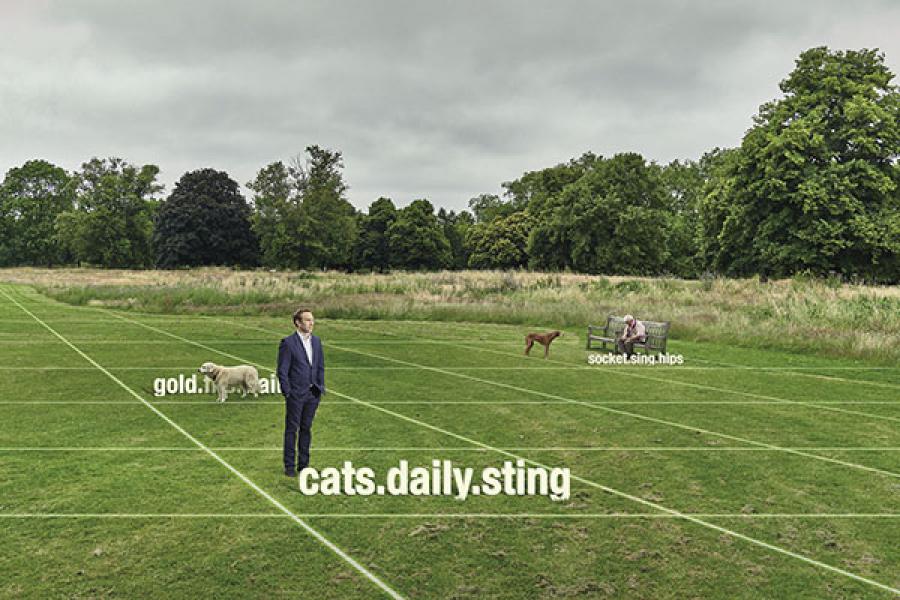 Image: Photographed by Levon Biss For Forbes. Chris Sheldrick Wears A Jacket by Gieves & Hawkes;Shirt by Jaeger; Pants by Tiger of Sweden; Shoes And Belt by Tods. Style Director: Joseph Deacetis; Style Associate: Juan Benson.
Chris Sheldrick’s startup has divided the globe into a grid of tiny blocks, including this square in Hyde Park, London

In a fast-growing suburb outside New Delhi, young women hail pink motorcycle taxis through an app called Bikxie. Launched in January, Bikxie has a novel feature: It pairs women drivers with women customers. And soon it will have another. Its users in Gurgaon, where rapid construction has created a confusing mess of locations, won’t need a street address. Instead, says Bikxie founder Divya Kalia, riders will simply type three ordinary words to identity the nine-square-metre parcel of land where they want to be dropped off. For example, the entrance to Bikxie’s office in New Delhi is artichoke.recruiter.sniff. Beyond India, Forbes’s New Jersey headquarters is gold.wink.flesh. The front door to the White House? Length.grab.torch.

Bikxie is pulling this data from a unified global addressing system devised by a company fittingly named What3Words. The London-based startup, launched in 2013 by Chris Sheldrick, a former music and events organiser, has divided the entire planet into 3-metre-by-3-metre squares (the size of a small bedroom) and assigned each a three-word string. The goal: Make it easier to find the homes of more than half of humanity who live in poorly marked areas, like many urban slums, or are among the 4 billion people who have no address at all. Much of Costa Rica, for instance, doesn’t have street names or house numbers.

“In some countries home delivery for post doesn’t happen,” Sheldrick says. “People are used to going, ‘I live behind the yellow lamppost near the coffee shop.’” In Rio de Janeiro’s favelas, a local mail-delivery company, Carteiro Amigo, already uses What3Words to find homes. Mongolia’s national postal service signed up last May for deliveries to the country’s 3 million citizens. Drivers with UK’s Direct Today Couriers use a What3Words-powered app and have cut missed deliveries by 83 percent since January. What3Words has raised $14.5 million from investors like Intel Capital and Aramex, the Middle East’s equivalent of FedEx, which has asked big local retailers to add a What3Words box to checkout pages. More than 250 businesses globally use What3Words, though it isn’t profitable yet.

Sheldrick, 35, wants What3Words to become a global standard, the comprehensive fix to the addressing problem that several national governments, like Ghana’s, have tried and failed to solve. He started the company after seeing some of his musical acts get lost in Italian villages and miss their gigs. Latitude and longitude coordinates failed to solve the problem. Mess up one of the 18 numbers, and you could end up 20 miles from your destination.

In January 2013 he began discussing the problem with Jack Waley-Cohen, an old friend from his chess team at Eton, the elite British boarding school. “If only someone could make GPS coordinates easy,” he remembers saying. They needed a sequence of, ideally, three things, “something everybody could remember,” he adds.

Words would do the trick. The pair divided the globe into 57 trillion squares that require about 40,000 different words to identify them all. They assigned short words to locations on land and longer ones to those on bodies of water.

To turn this clever idea into a business, Sheldrick eschewed the open-source approach embraced by some other location-based enterprises, choosing instead to patent-protect the word-assignments and algorithm. His team packed the formula into 10 MB of space, making the service easy for businesses to incorporate into their apps, run from their own servers and use in areas with no mobile data coverage.

Sheldrick now faces several challenges. One is getting people to adopt a completely new way of defining location. That’s a big ask, isn’t it? “There’s plenty of behaviour-changing platforms,” Sheldrick says, noting that Airbnb seemed creepy at first but is now second nature to travellers. “As you get more businesses pushing this, it becomes de facto,” he says. “We’re talking to all the large global logistics firms.”

Business customers like Aramex are crucial to helping What3Words get companies to commit. (Sheldrick won’t say how many people currently use the technology.) But there’s the tantalising future prospect of robots using Sheldrick’s system to make deliveries. When Amazon announced it was testing drones, “very quickly the cogs turned in my head,” says Sheldrick.

The other challenge is making money. Sheldrick won’t disclose how much it charges clients or the total revenues, but Forbes estimates the startup has brought in less than $1 million in its first three years. What3Words licenses access to its formula, which converts GPS coordinates into three-word addresses. Some pay extra for software that hosts the formula on their own system, so that, say, users of a mapping app won’t have to look up the address online.

Not everyone thinks the system is necessary. Starship Technologies, an Estonian startup that deploys and coordinates self-driving delivery robots for companies in the UK, Germany and Switzerland, recently talked with What3Words. “Robots don’t understand street addresses,” says Starship COO Allan Martinson. “We may use What3Words as part of that address, but it must be widely used.” Starship’s sensor-laden robots already create their own maps across city streets, he adds, just like Google’s Street View cars do. Amazon’s drones may end up doing the same.

Either way, the startup may not remain independent for long. “What3Words is a perfect candidate to be taken over in a couple of years,”

says Martijn de Wever, founder of Force Over Mass Capital, which recently invested. He sees Google, Apple or Amazon being particularly interested. “They could integrate it fully within their current mapping technology.”

Tweets by @forbes_india
The sources of our discontent with how the world is going
RBL Bank IPO oversubscribed by 3.08 times