Steve McQueen, Janis Joplin and one woman's quest to find the one that got away 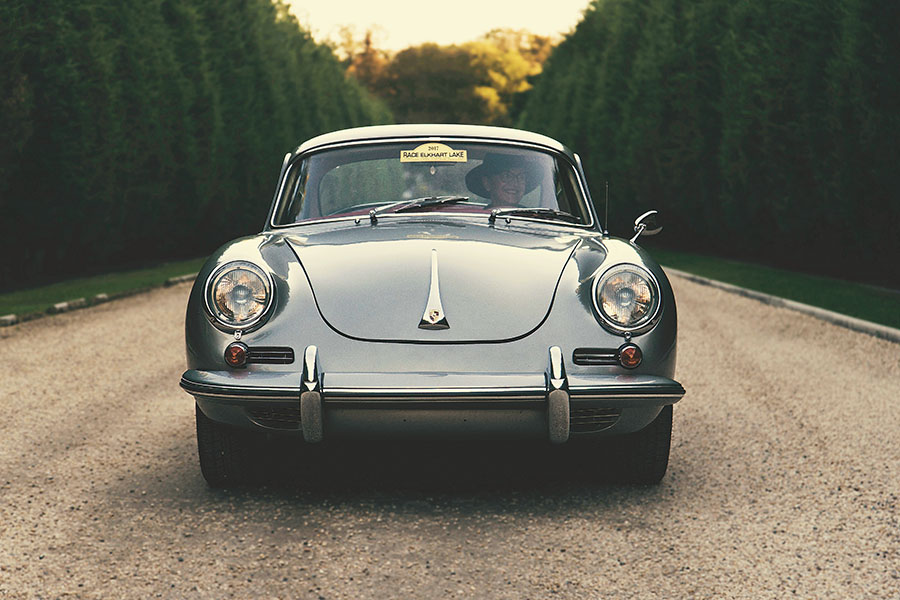 Long-time Chicago resident Pamela Brundage is not your average vintage sports car owner. There are mainly two types: Hoarders and drivers. Brundage is the latter. “I understand the reasoning behind never driving a vintage car,” says the fashionable American Airlines flight attendant. “That type of owner is doing the world a favour by preserving the car in its most pristine state for future generations. However, they aren’t enjoying it. They aren’t using the car for what it was made for—to drive. It’s sad.” Brundage drives her vintage sports car, a 1962 Porsche 356B Super 90 coupe, as often as possible. “Not every day,” she admits. “But as often as the harsh Chicago weather will allow.” If it gets dirty, she cleans it. If it gets wet, she dries it off. But she doesn’t want it to rust and fade away.

Though Brundage has only been collecting for a few years, her love affair with the 356 dates back more than four decades, ever since her mother, Jean, bought a used 1961 356B Coupe in the late 1960s. However, unlike most collectors who wait a lifetime to find that one car, that Holy Grail that elevates their collection, Brundage found hers several months ago. That very same 356B her mother owned all those years ago. The car in which she actually learnt to drive. Brundage’s most recent road trip brought her from Chicago to Long Island, New York, in October last year for ‘Driven to America 2’, an annual celebration of air-cooled Porsches built between 1948 and 1998 (of which the 356 is one), and the man responsible for introducing the Porsche marque to America in 1951, Max Hoffman. Making the journey meant driving her silver 1962 356B Super 90 more than 1,200 kilometres, and each time behind the wheel reminds her of the inspiration for her Porsche passion—her mother. “My mother, Jean, worked for Lockheed Missiles and Space Corporation in Sunnyvale, California, during the space race,” Brundage recalls. Hailing from the San Francisco Bay Area, her mom was a secretary in the reception area of the budding aerospace company. Part of her job was to greet astronauts and other VIPs from the space programme. As it happened, most of the engineers at Lockheed owned Porsche 356s. They were so easy to wrench on, so easy to tweak into a race car. The engineers couldn’t resist. The first 356s first rolled off the “assembly line” in 1948 and immediately set the bar for every Porsche that followed. It made the German automaker synonymous with top-notch craftsmanship, outstanding road manners, and minimalist aesthetic. Designed by “Ferry” Porsche, the son of company founder Ferdinand Porsche, the 356 is actually quite a simple car. Though it is the first roadster to bear the Porsche name, the 356 was essentially a souped-up Volkswagen Beetle. 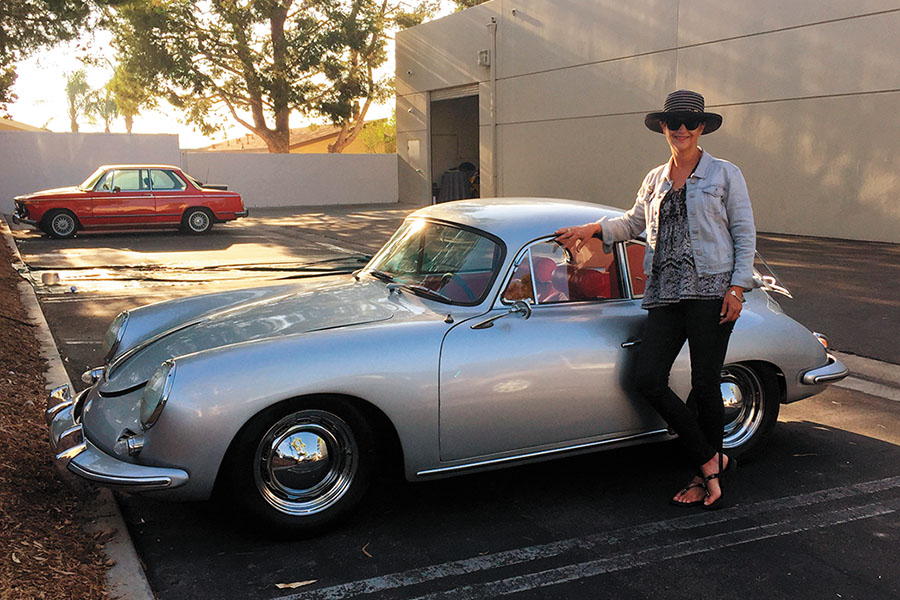 Pamela Brundage (left) on the day she was reunited with her mother’s 1961 Porsche 356 in August 2018
Image: Chuck Tannert
Ferry’s father had designed and built the iconic “People’s Car” at the behest of Adolf Hitler, before World War II, and had always wanted to make a small sports car out of it. So did Ferry, and he made it happen. Using many VW parts—suspension, brakes, and a rather anaemic 40-horsepower, four-cylinder engine—the first 356s made were aluminium-bodied two-door coupes. After hand-building a run of these cars at its wartime factory in Gmund, Austria, the Porsche engineering company moved back to Stuttgart, Germany. Once there, it started building the diminutive sports car using less expensive steel rather than aluminum so the savings could be passed on to potential buyers. The air-cooled, rear-wheel-drive two-seater wasn’t exactly fast, especially compared with Alfa Romeo or Jaguar sports cars of the day. Nor was it as affordable, costing nearly $4,000 (or about $42,000 today), twice as much as the inexpensive British roadsters from Austin-Healy and MG. But the 356 was nimble and responsive and, thus, a hoot to drive. A few tweaks were all you needed to turn a stock 356 into a legitimate race-worthy automobile. Although the basic design was never altered during the vehicle’s 18-year run, a few functional enhancements were made through the generations, such as better aerodynamics, curved windshields, and several interior additions. The car was also made available in a variety of body styles, including the extremely rare split roof, the cabriolet, the convertible and the roadster. Even so, Porsche always managed to maintain the car’s minimalist design, elegant and comfortable, and sporty demeanour. These characteristics are also found on the 356’s replacement, the legendary Porsche 911. 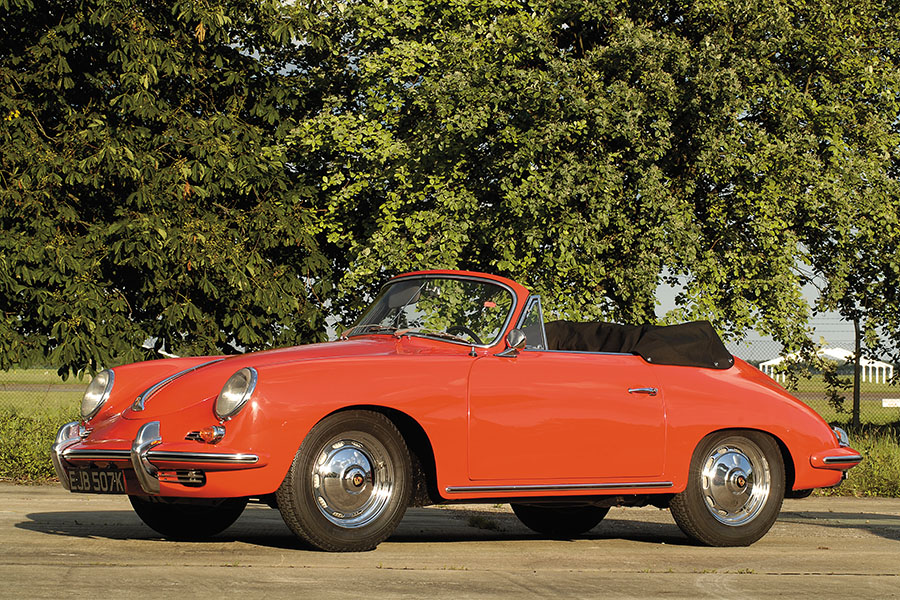 A 1960 Porsche 356B 1600 Cabriolet in excellent condition costs upwards of $80,000
Image: National Motor Museum/Heritage Images/Getty Images
The 356 was popular in the 1960s with the in crowd. Actor Steve McQueen owned one. So did singer Janis Joplin. Hers recently sold at auction for $1.76 million. Today they’re still prized by celebrities. Patrick Dempsey purchased a 1963 Porsche 356 with his first real paycheck as an actor. In 2016, Jerry Seinfeld sold several of his Porsches, including a 1958 Porsche 356 A 1500 GS/GT Carrera Speedster, that went for $1.5 million at auction. Classic car specialist Hagerty Insurance Agency values a 1961 356B, similar to Jean Brundage’s, at around $113,000 in Concours condition and the 1962 356B Super 90 at $159,000 in the same condition. “Mom said the Lockheed parking lot was like a sea of them,” recalls Brundage. “All different types, too.” So Jean got it in her head that she needed to buy one and did, just before leaving Lockheed to go work as the executive secretary for casino magnate William Harrah in Reno, Nevada. In addition to founding Harrah’s Hotel and Casinos, Harrah was an avid car collector, owning about 1,400 vehicles of all makes and models before his death in 1978. “Not one Porsche in the whole collection when my mom worked for him, though,” Brundage jokes. “I used to hang out at [Harrah’s] restoration facility when I was young. It was so clean and beautiful.” 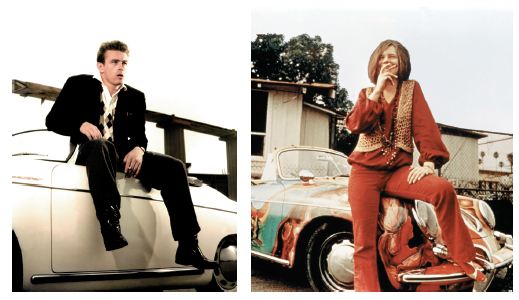 James Dean with his Porsche 356 and Janis Joplin with hers
Image: Michael Ochs Archives/Getty Images; RB/Redferns
When Brundage got her driver’s permit in the early 1970s, that sporty little 356 was the family’s only vehicle. “So, that’s the car I learnt to drive in,” she says with a laugh. “Mom took me out to the Centennial Coliseum parking lot in Reno when it was empty and taught me to work the clutch, the gas, and the brake. I can’t believe how hard I was on that gearbox.” When other teenagers were driving Mustangs, Thunderbirds and other American-made muscle to school, Pamela would drop her mom off at Harrah’s and roll up to high school in the 356. “The kids were, like, ‘Whoa, what is that?’ It was a hit—especially with the boys.” When her mother announced that she was going to sell the car, Pamela was heartbroken: “Not this car!’ I love this car. Absolutely love it.” It wasn’t until 40 years after her mother sold the 356 to a classmate that Pamela considered buying it.  Ironically, she had the chance thanks to a run-in she had with a random Porsche 356 owner three years ago. The encounter rekindled her love for the 356. “I was walking through my neighbourhood and came across a local car show, and all of these feelings came rushing back,” she explains. “Then, I came across this guy with a 356, and I was hooked. Mom owned a lot of cool cars back then. A Lincoln Continental with the suicide doors, a [Volkswagen] Karmann Ghia, even a Porsche 912. However, there was something special about the 356.” After listening to her story of love and loss, the stranger urged Pamela to go looking for her mother’s car. “Not being in a vintage car circle, I thought, ‘What a crazy idea’,” says Brundage. It turned out her mother still had much paperwork from the old car. Three years and lots of internet sleuthing later, her grail quest ended. “Some guy on Porsche 356 Registry ran the [vehicle identification number] we had for my mom’s car about a month ago and found it in California,” says Brundage, still stunned that she found the car, which was delivered to Chicago just before Brundage left for Long Island. “Mom’s car,” as Brundage calls it, currently sits at Classic Remedy autos in Addison, just outside of Chicago. The shop specialises in iconic Porsche restorations. “I had the work done on my 356 there,” says Brundage. The previous owner did the paint, interior and changed the brakes from drum to disc for safety reasons. She had the engine rebuilt in winter 2018, changed the wiring harness and connections, and changed the electrical system back to the original six-volt. “I’ve put 7,000 miles [over 11,000 kilometres] on the car since May,” boasts Brundage. And she hasn’t had a single oil leak. Brundage has no idea what to do with her mother’s 1961 356B: “I need to get my head wrapped around it. I am in no rush. But like mine, this car has some original components missing. My gut tells me to take it back to the original like when my mom had [first owned it]. A full-body restoration. I’d be happy to drive it as is for a while, though.” 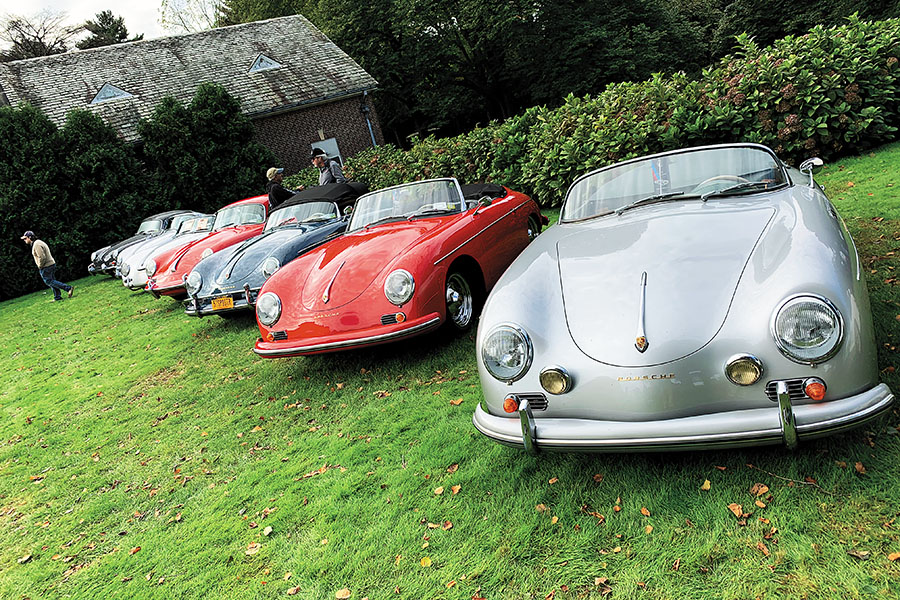 A fleet of Porsche 356s at the 2018 ‘Driven to America 2’ auto show in Old Westbury, New York
Image: Chuck Tannert

Unfortunately, her mother won’t be around to see the car achieve former glory. “She passed away five weeks before I was contacted about the car,” Brundage says. “After my son passed away in 2015, I realised if you want to do something, don’t stand around and talk about it. If you can do it, do what you want to do. You don’t know what will happen tomorrow.” So, what’s her next car? “My mom had this Porsche 912,” says Brundage coyly. “It would be fun.”