How Poshmark transcended secondhand clothing to become a $625 million fashion marketplace, complete with its own homegrown entrepreneurs 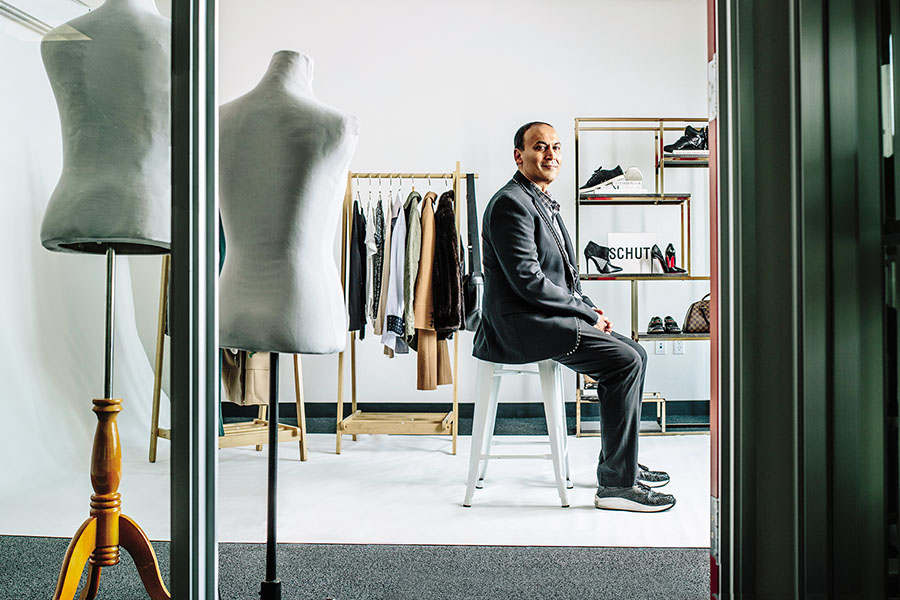 Manish Chandra, 51, dresses the part of a Silicon Valley engineer turned fashion app CEO, pairing his Louis Vuitton belt and Tommy Bahama dress shirt with Adidas NMD sneakers. He bought them all on Poshmark, the social shopping app he co-founded with Tracy Sun (in charge of new markets), Gautam Golwala (CTO) and Chetan Pungaliya (engineering chief). “My first job was working for Intel building databases for semiconductors, and today I help men and women sell shoes,” Chandra says. “Only in Silicon Valley can you have that journey over the course of 30 years.”

It’s an increasingly lucrative trip, largely because of Poshmark, in which Chandra has an ­estimated 15 percent stake. Poshmark started in 2011 as a way for women to sell extra items from their closets—an eBay for used clothing. It’s now becoming more than that, selling new clothes too, complete with its own wholesale market and fashion entrepreneurs. The company has carved out a niche that feels like window-shopping on a phone instead of the search-to-buy experience on Amazon. People follow each other’s virtual closets full of clothes for sale—a mix of pre-worn and boutique items—and share what they find interesting. It’s a social network of 40 million people, akin to Instagram or Pinterest. The difference: Everything you see is for sale.

About 5 million users, are also sellers on the app. Poshmark, which is based in Redwood City, California, doesn’t hold any inventory; its users sell directly to each other. À la Etsy and eBay, the app has spawned small-scale entrepreneurs, whether professional resellers or bootstrap fashionistas with their own clothing labels. Poshmark takes a 20 percent cut from each sale, and revenue is expected to hit $140 million in 2018. The company, which has over 300 employees and plans to hire 100 more, remains unprofitable as it focuses on expanding into new categories (menswear and makeup) and internationally (Canada will be first). Poshmark has raised $160 million in venture financing at a recent valuation of $625 million, and its anticipated 70 percent revenue growth over 2017 (which matches its growth from 2016 to 2017) earned it a spot on Forbes’ Next Billion-Dollar Startups list.

Poshmark makes up only a fraction of a ­sliver of the $600 billion US ecommerce market. But the demand for discount clothing is huge. Offline, nine in 10 shoppers buy from discount stores, and 75 percent are looking for deals on clothing, according to the National Retail Federation. With online retail growing about $4 billion every quarter, Chandra thinks he’s finally timed his idea of building a social shopping network right.

His first startup, Kaboodle, in 2005, was his initial attempt to combine social and shopping. At launch, the theme was home décor. A so-called “bookmarking” site, Kaboodle let people collect links to items they wanted to buy and share them with friends. ­Kaboodle was moderately successful: Chandra sold it to Hearst for a reported $30 million in 2007. But real social shopping would have to await the mass adoption of social networks.

Poshmark was his next idea, built on a pop-culture junkie’s belief that the way you could introduce people to new fashions is through people, not brands. “I am probably more in tune with pop culture as a 51-year-old guy than many people would realise,” Chandra says. “I could tell you the latest lines to Drake’s song, but I probably couldn’t tell you what’s happening in enterprise software right now.”

His career started, nevertheless, in enterprise software. Chandra grew up in India and spent the first 15 years of life moving every two to three years to follow his father’s career as a judge. He applied to the elite Indian Institute of Technology Kanpur to study computer science. He got his master’s at the University of Texas at Austin. After graduating in 1989, he worked at Intel on databases for a year, before leaving to work at a series of database startups in California and got his MBA from UC Berkeley in 1995.

“ Discovery-based shopping is the best way to be differentiated from Amazon and Alibaba.”
Hans Tung, managing partner, GGV Capital


At his daughter’s preschool he ran into Pungaliya, whom he had worked with at an ­earlier startup, and shared with him the idea for Kaboodle. The pair recruited a third co-founder to help with engineering, put in $10,000 each and launched it from his garage—the same one Chandra would return to when he started Poshmark. Kaboodle took some time to get off the ground. Poshmark proved to be an easier sell to investors, at least at first. “It was a different journey because of my reputation and that I’d already had a successful exit. I had a term sheet even before I started my company,” Chandra says.

From the beginning, Chandra wanted the focus to be on individual buyers and sellers. The market tailwinds were in his favour. Poshmark launched with only an iPhone app when the mobile phone was starting to replace cameras and computers. And a few years after the Great Recession, people were searching for ways to make some extra pocket change.

Poshmark and a cohort of other startups, like luxury reseller RealReal and secondhand marketplace ThredUp, tried to take advantage of the shift in consumer sentiment. Both competitors went for a digital take on consignment, in which people part with their things and get paid when they sell online. While ThredUp and the ­RealReal handled the pricing and selling, Poshmark went the eBay route, letting individuals do the selling. “It’s a totally different customer,” says ThredUp Founder and CEO James Reinhart.

Poshmark’s difference was building a social network not around who you know but around whose taste in clothes you like. People share listings they find interesting for their own followers to see. Daily “posh parties” within the app let people browse themes, like ankle booties or prom dresses. Each listing has a comment section for anyone to ask questions, and shoppers can ask sellers to style them by combining looks from their closet into a bundle.

Most ecommerce giants today rely on search-based shopping, but humans don’t necessarily shop like that in the real world, instead browsing a store or asking their friends about cute clothes they’re wearing. “Amazon and Alibaba shouldn’t be the only game in town,” says Hans Tung, a managing partner at GGV Capital and an investor in both Poshmark and Alibaba. “Discovery-based shopping is the best way to be differentiated from them.”

The company had 1,000 users in 2012, but they spent a lot of time on the app, opening it at least seven times a day for a total of 20 to 25 minutes. People still spend that much time on Poshmark, but now, of course, it’s millions of users. The rapid growth almost killed the company in 2013 after it grew 10 times bigger in one year. Now, after scaling its servers, Chandra is less worried about the technical challenges—and more about finding enough buyers and sellers to rival eBay.

Entrepreneurs like Suzanne Canon, 39, are both the by-product of Poshmark’s growth and the key to its future. The Texan started selling her used clothes on the app in December 2012. After running through her own closet, she started ­buying clothes wholesale and reselling them. She then launched her own clothing brand, Infinity Raine, with her business partner, Tiffany Kroeger, and started selling to other Poshmark sellers through the company’s wholesale market. In April, after six years, Canon became the first seller on Poshmark to reach $1 million in total sales, and the duo opened their first brick-and-mortar retail store in Gainesville in May. “It’s a blessing, really, that it’s all happened as it has, because we both got on it just trying to get rid of some of our clothes,” Canon says.

Next up for Poshmark: Deeper expansion into menswear, kid’s clothing, plus sizes and ­luxury goods. Already, one in five new users is male, and the company is eyeing new markets like makeup and home décor. “We think of Poshmark as a social-commerce platform where fashion was the beginning,” Chandra says, “but certainly not the only place we will go.”