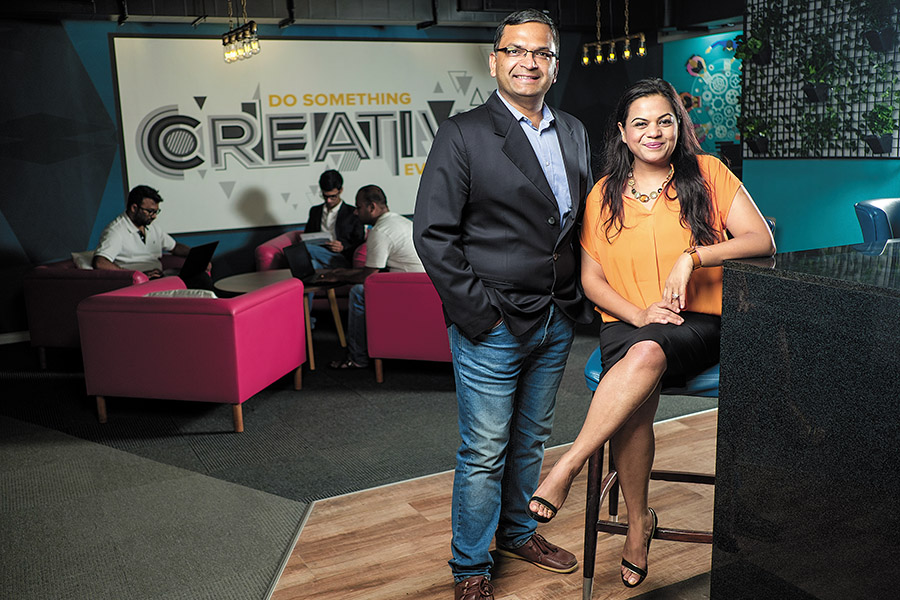 Come April 2019 and Bengaluru’s northern suburb of Hebbal, which boasts of the 9.8 million sq ft Manyata Embassy Business Park, would have a new two lakh square feet mixed-use development. What was initially planned as a 200-room hotel—to service the requirements of Hebbal’s burgeoning professional community—is being retrofitted to a co-living-cum-working facility that would also house a food court, a sports arena, a health club, and possibly a convenience store.

This would be the 31st property of IndiQube, a three-year-old flexible workspace operator that counts freelancers, startups, and multinationals among its over-350 clients, in Bengaluru. “We noticed that wherever our [flexible workspace] properties came up, the hotels surrounding them did well for various reasons. New hires from outside the city and outstation employees needed temporary accommodation,” says Rishi Das (44), co-founder and chairman of IndiQube. So instead of letting hotels make money off their clients, Das and his wife Meghna Agarwal (39), the co-founder and chief operating officer, decided to make more money themselves by offering clients a differentiated product.

“This will be our signature property,” adds Agarwal. “The [60-bed] co-living space will be let out on a per-bed basis,” she explains. The charges, which are still being worked on, could vary from ₹1,500 per night to ₹30,000 a month (minus F&B) for long-stay guests.

With over 200 operato₹across the country, differentiation is the operative word in the crowded flexible workspace market. In its latest report in India, global real estate consultancy firm CBRE talks of “nicihification” of product offerings, where operators, like IndiQube, are tailor-making their products to stay relevant. With 15 million sq ft operational, India is one of the biggest and fastest growing markets for flexible workspaces across the Asia Pacific region, CBRE reports.

Like in Hebbal, IndiQube is opening a 2.5 lakh sq ft “signature property” in south Bengaluru next year. Going forward, Das estimates 50 percent of IndiQube’s properties would feature a co-living component.

“Rishi and Meghna have created a business which is disruptive and is likely to replace existing ways of doing business,” says Sandeep Singhal, managing director, WestBridge Capital, which invested ₹100 crore in IndiQube for an undisclosed minority stake in June. “If there is a wonderful accommodation in the same building then travel time can be reduced to zero,” adds Singhal.

Given the slump in the residential real estate market, there are plenty of vacant apartments up for grabs in India’s IT capital, and Das and Agarwal are making the most of it. “If I have a property on, let’s say, Outer Ring Road [in Bengaluru] and there is a distressed residential property a kilometre away, we will partner with a standalone co-living operator and provide point-to-point shuttle service to the office,” says Das, adding that such partnerships are being cemented.

Unrelated to co-living, but another differentiated approach by the couple has been their penchant for opening flexible workspaces at marquee hotels such as The Leela Palace and Courtyard by Marriott, both in Bengaluru. By January, they will  be opening at The Leela in Mumbai. As Das explains, hotels, which are also looking to make the most of their idle commercial spaces, bring value in terms of ready space and their ‘tony’ address.

“A lot of corporates who typically took office space on conventional leases are now looking at flexible workspaces,” says Ram Chandnani, managing director, advisory and transaction services India, CBRE. “A lot of developers are, in fact, looking at this model to make sure they retain their tenants.” CBRE, for one, has entered the fray in the Americas.

In India, the Embassy Group that has a partnership with WeWork, and RMZ Corp with its CoWrks brand, are the two big commercial real estate developers that operate over 1.5 million sq ft of flexible workspaces. “This is going to be an oligopoly where different players with different propositions will win,” says Singhal of WestBridge. IndiQube, he says, offers a price proposition that is compelling. “Besides, their office spaces are well-arranged, have lots of facilities and services,” adds Singhal.

In comparison with the traditional office space lease rentals, Das and Agarwal claim IndiQube’s pricing is 30 to 50 percent cheaper. “They are good at providing smaller buildings [of about 80,000 sq ft in size] at prime locations and instead of the gig economy, are driven by captive offices,” says Rashmi Daga, founder and CEO, FreshMenu. The Bengaluru-based online restaurant chain has scaled from eight to 150 seats at IndiQube’s office in HSR Layout. “Overall, they just make it easier for you to run your business,” says Daga.

Like FreshMenu, online jewellery brand BlueStone has scaled from 50 to 300 seats at an IndiQube office in Bengaluru, while Rubrik, a cloud data management company, has grown from four to 200 seats at another. At present, IndiQube operates 30 flexible workspaces in India’s tech capital.

Given that the founders do not have any formal work experience in the real estate sector or are not part of any big group, they have still managed to bag prime assets and offer affordable prices. Reason: The couple seek out landowners who are high-net worth individuals (HNI), but are not in the real estate business. Typically, these landlords are not looking to make money out of high rentals, but to create an asset class that delivers a steady annuity income to their families. This income, according to Das, could vary from 7 to 15 percent depending on the city and locations within the city.
Interestingly, in Bengaluru, of the 30 properties that IndiQube operates, about 75 percent are owned by wealthy landlords from the neighbouring states of Andhra Pradesh and Telangana, many of whom are related to each other. In Pune, the couple work with an HNI landlord who owns roughly 2,000 acres in Yerawada.

Once relationships with the landlords have been established, the couple go about implementing their IndiQube standard of operations, which includes location assessment, tenant catchment and transport infrastructure, among others, to find the perfect building. On an average, an 80,000 sq ft IndiQube facility can seat up to 1,500 people. “There is a lot of research that goes into setting up our properties,” says Agarwal. “Which is why we are sitting on 90 percent occupancy, when the industry average is about 70 to 75 percent.”

Even while IndiQube’s signature properties to house co-living spaces are being set up, the two co-founders have set their sights on another differentiating model. They are working with the Indian Institute of Management (IIM)-Bangalore to set up the latter’s incubator facilities across properties in India. Recently, IIM-Ahmedabad signed a memorandum of understanding with CoWrks for collaboration in executive education, startup support and incubation.

“A lot of mid-sized corporates want a [flexible workspace] solution that meets their requirements, but has to be best in class in terms of pricing. IndiQube is very focussed on providing the right price and service,” believes Singhal.