Power From the Waves

Ocean power almost wiped out. Now it's making a comeback 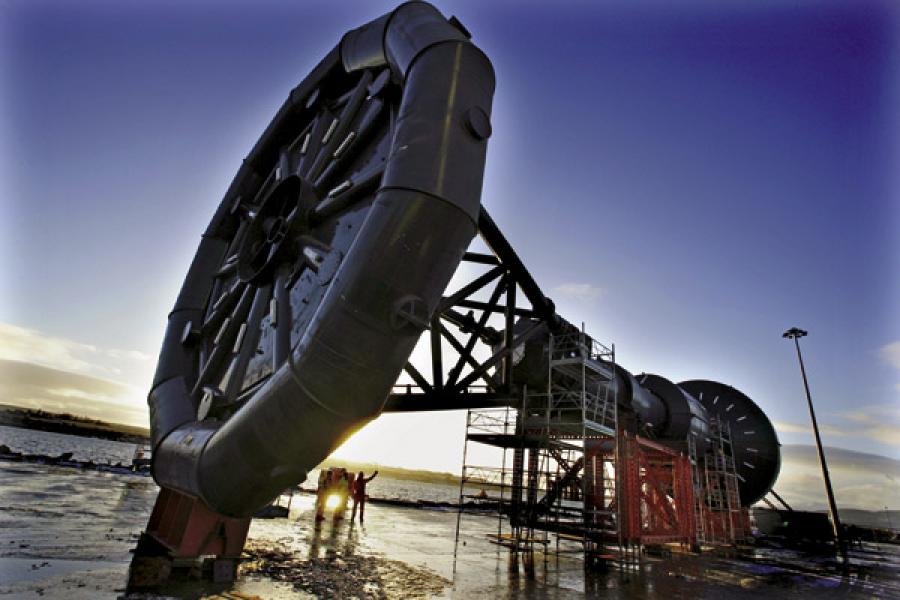 Motoring Across The Puget Sound, Reenst Lesemann spots a yellow, barnacle-encrusted contraption bobbing on the wind-whipped waters off Seattle. Called the SeaRay, it’s the prototype of a device that Lesemann’s startup, Columbia Power Technologies, is betting can help transform wave energy from a long-running science experiment into the next renewable energy bonanza. “I have never seen a multibillion-dollar market where the customers are literally waiting on the technology,” says Lesemann, a former venture capitalist.

Indeed. A new government-sponsored study has found that the oceans surrounding the US contain enough energy to potentially supply more than half the nation’s electricity demand. Even with the limits of today’s technology, scientists concluded, there’s sufficient recoverable energy offshore—some 1,170 tera-watt hours a year in all—to keep a third of the country humming. More energy crashes annually onto the West Coast, for instance, than California uses in a year.

And now the reality check: 5 megawatts. That’s how much electricity—enough to light about 4,000 American homes—is being currently generated by wave energy worldwide despite years of work by a plethora of start-ups and many millions of dollars in government support, according to research firm Bloomberg New Energy Finance.

What happened? Before the financial crash, the great green tech boom unleashed a rush of startups and speculators staking claims on federal waters to build massive wave farms, while in Europe governments, including Portugal and Scotland, placed big bets on wave energy. But making green off blue power soon proved to be so much California dreaming as plans for West Coast wave energy arrays sank under opposition from surfers, fishermen and local residents.

Even California regulators, who had green-lighted Pacific Gas & Electric’s contract to buy electricity from a solar power station that would orbit the Earth, balked at the utility’s deal with a wave energy start-up, concluding the technology was too risky. And when companies finally began deploying their first wave energy generators in Europe, punishing ocean conditions took their toll as some devices broke down or failed to perform as expected. 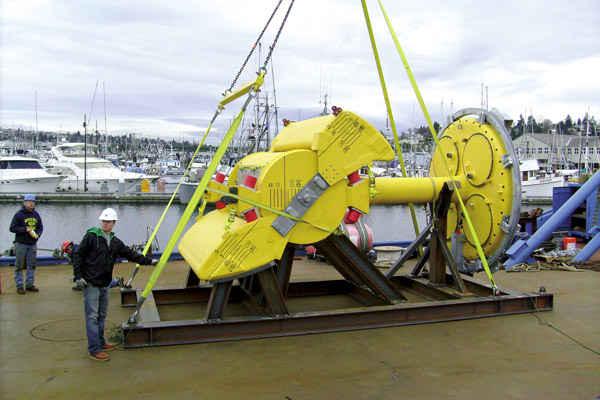 “They may work well in prototype in a very small size, but when you scale them they don’t necessarily work as well in a harsh seawater environment,” says Angus McCrone, who follows the wave industry for Bloomberg New Energy Finance.

But now the endless wait for that perfect wave generator may be drawing to a close. Thanks to advances in software, a new generation of start-ups like Columbia Power are cheaply and quickly testing hundreds of new designs in virtual oceans while veterans of the industry are perfecting their technology to wring more energy from waves and lower the cost of electricity. Multinational corporations like Lockheed Martin and Alstom, the French energy giant, have struck partnerships with start-ups to commercialise their technology. “We see wave energy as a very serious market for renewable energy in the future,” says Tim Fuhr, director of ocean energy for Lockheed Martin. “Basically, we see the ocean as the largest untouched source of power on the planet.”

Last September, Lockheed Martin paired with Ocean Power Technologies, a New Jersey company that has spent the better part of two decades developing a device to transform the motion of waves into electricity, accumulating a $120 million deficit along the way. The aerospace conglomerate will help OPT develop a supply chain to industrialise its PowerBuoy wave generator, which is undergoing sea trials in Scotland, for deployment off the Oregon coast this year as part of a 1.5-megawatt wave farm. (Lockheed has a similar partnership with Wave-bob, an Irish wave energy company.) “We have established the survivability of our technology out in the ocean, and we now have a product we can sell  commercially,” says Charles Dunleavy, OPT’s chief executive. 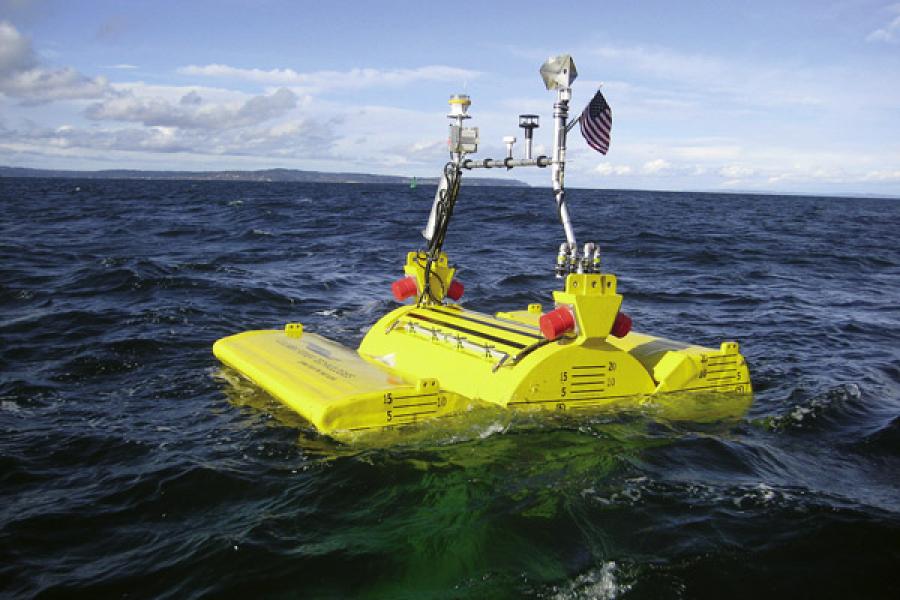 Image: Images Courtesy Columbia Pwr, Opt
SEA POWER Columbia Power’s SeaRay prototype sports two wings, each attached to a magnetic generator. The wings ride the waves, and the up-and-down motion causes magnets to travel along a generator coil to create a magnetic field that produces voltage. The electricity is transmitted through a cable to shore
The PowerBuoy generates 150 kilowatts of electricity and resembles a giant vertical dumbbell anchored to the sea floor. The top portion of the 115-foot-long device floats on the ocean’s surface, and as it bobs among the waves the motion pushes pistons to create mechanical energy to drive an electrical generator. The electricity is routed through cables to the power grid onshore.

According to Dunleavy, software simulations have been key to improving both the PowerBuoy’s design and its ability to tolerate harsh ocean con- ditions. A smaller version deployed for the US Navy off the New Jersey coast survived 53-foot waves when Hurricane Irene hit last August. Software control systems also allow the device to adjust to wave conditions.

Columbia Power Technologies, based in Corvallis, Oregon, aims to spend a fraction of the time and cash OPT has expended to deploy its full-size wave generator. “We want to innovate as inexpensively as possible by using more pixels and fewer molecules,” says Lesemann, 47. “Our competitors, for whatever reasons, have tended to innovate through large-scale prototypes, which is a very expensive way to go.”

The firm, which sprang from collaboration with scientists at Oregon State University, uses industrial-strength software from Ansys and other companies to evaluate the performance of hundreds of designs and simulate the impact of monster waves, earthquakes and tsunamis on a wave generator. “There’s not a lot of history in terms of what’s required for a wave energy device to withstand the wide range of conditions out in the ocean,” says Jim Cashman, chief executive of Ansys, a $6 billion company whose software is used to design everything from jetliners to offshore oil rigs. “These are complex systems and involve a heavy capital investment, so the cost of being wrong gets to be very high.” Columbia Power ran through more than 350 iterations of the latest version of the SeaRay to find the optimal shape for the device and to remove complexity to minimise maintenance costs and the frequency of breakdowns miles from shore. “That’s a lot of number crunching, and 10 years ago we would have never been able to do this,” notes Lesemann.

Certainly not for the $4 million Columbia Power has raised from angel investors and another $8.5 million in grants from the Department of Energy and the US Navy. As we circle the SeaRay on the Puget Sound, Lesemann points out that each of the device’s two fiberglass wings, which are attached to a cylindrical nacelle, are directly connected to a magnetic generator. As the wings rise and fall in the waves, magnets move up and down a generator coil to create a magnetic field that produces voltage. 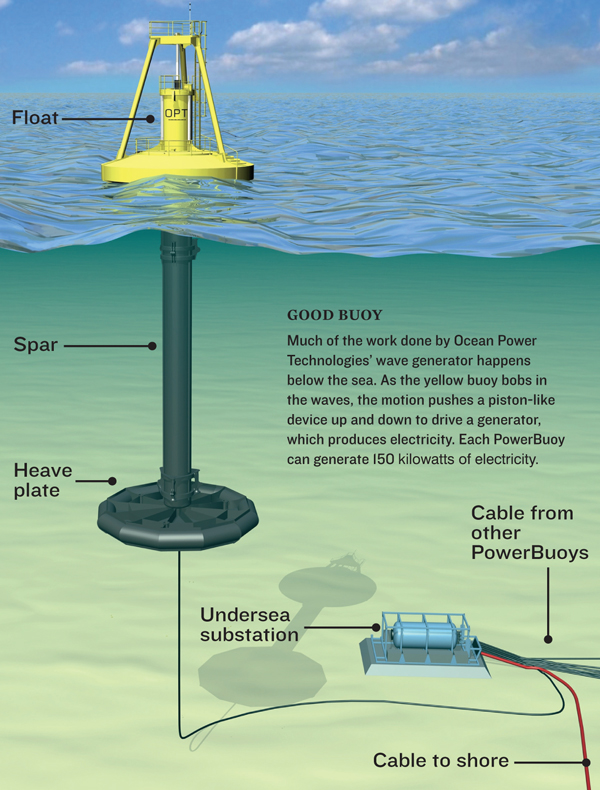 Columbia Power plans to pull the SeaRay from the water in March, having accumulated a year’s worth of data on its performance, and build the full-scale, 80-foot-long Manta wave generator for deployment in 2013. Lesemann expects it’ll take $30 million to move into production.

McCrone of Bloomberg New Energy Finance says the true price of wave energy won’t be known until mass deployment begins, sometime after 2020. “I think the opportunity is still there,” he notes, “and if anything the opportunity is confirmed as being bigger than people might have thought before.”

Tweets by @forbesindia
Designs On China
A Step Back. A Step Forward: Finding a New Perspective in a Season of Change