Proto Labs is turning the manufacturing process on its head 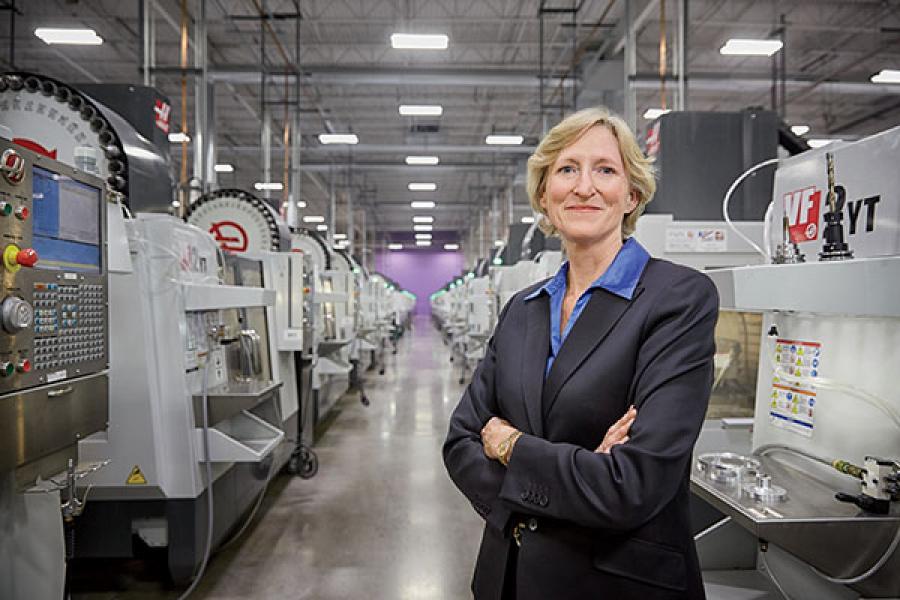 Image: Thomas Strand for Forbes
Lean machine: CEO Holt can churn out 10,000 parts in a day; she serves 16,000 customers

Ambition has a distinctive sound— and you can hear it if you step inside the newly renovated plant outside Plymouth, Minnesota. Proto Labs’ machines are running 24 hours a day, sculpting small bricks from dozens of different types of plastics and metals into parts that will serve as prototypes for the likes of Xerox, Northrop Grumman, Medtronic, Siemens and Ford. Most of the vast, echoing factory floor (166,000 sq ft) is empty. Not for long: Vicki Holt, the 56-year-old CEO, has big plans.

Holt was hired in February to turn Proto Labs from a $185 million (sales) rapid prototyping outfit into a billion-dollar technology powerhouse. Tall and lean, with her gamine blonde bob and elegant coat, she’s hardly a factory boss out of central casting. Holt insists Proto Labs isn’t a manufacturing company at all, though it runs six plants in the US, Europe and Japan. That’s because its entire process is automated. All but one of the analysts who follow the company now have it pegged as a tech play and, says Holt with a grin, the last guy is primed to switch soon.

“It’s a very large market out there,” says Holt, sitting in her unadorned office in Maple Plain, about 20 miles west of Minneapolis. She is sometimes given to banging her desk for emphasis while outlining her hoped-for trajectory for Proto Labs: An eventual $7 billion bite out of the $90-billion-a-year market in three continents. “Our sales are only $200 million, so you can see we’ve got a long way to go.” With that steep climb in mind, she’s picking her targets carefully, emphasising medical equipment, because the road to FDA approval requires a lot of iteration and testing, translating into orders for highly customised parts, and the lighting industry (since buildings are being retrofitted with LEDs but under tight regulation requiring many prototypes).

Proto Labs was conceived in frustration. Founder and inventor Larry Lukis was fed up with the months-long wait and high cost of a few injection-moulded parts for the laser printers he was designing. So he launched the Protomold Company in 1999, using software to automate the process for those parts. Soon, he began thinking outside of printers.

Engineers in consumer products, medical devices, appliances, electronics and automobiles started leaning on the company for quick turnaround of prototype parts made cheaply and precisely. Protomold became the go-to shop for rush orders before a trial or product test—as well as for small batches of parts for discontinued goods still in use and for new products, like a Xerox copier, being rushed to market. Customers could shoot their 3-D computer-aided designs over the web and get a quote in a few hours. Most larger competitors scorned such small-bore jobs. Lukis’ startup grew on average 25 percent per annum every year except recession-rocked 2009, when it folded in a computer-numerical control machining service and changed its name to Proto Labs.

“No one can really do what they do,” says Troy Jensen, an MD at Piper Jaffray. But he has one concern: The growing enthusiasm for 3-D printers. As more industrial companies embrace the devices—and the technology evolves beyond plastic to more durable materials like metal—more prototypes may be made in-house. Still, says Brian Drab, an analyst at William Blair, for speed, scale and cost, nothing beats injection moulding.

Holt took over from Brad Cleveland (who has been living with brain cancer) when he stepped down and sold most of his $75 million stake. Proto Labs, public since 2012, needed someone with experience of running a large operation. Holt had earned plaudits at her last gig. In less than three years, she jump-started Spartech, a sluggish maker of plastic sheeting and compounds used in aircraft cabin windows and bulletproof barriers, increasing operating income by 73 percent. Two years ago, she sold the $1.2 billion (sales) company to PolyOne for about $400 million.

While Holt doesn’t like to dwell on it, there are precious few women running manufacturing companies (and they represent only 27 percent of the workforce); across all industries, they make up 5 percent of the top jobs at the largest US corporations. “It takes a generation,” she sighs. With a BA in chemistry from Duke and an MBA from Pace University, Holt was girded for battle in fields as various as polymer science, finance and marketing. She spent 18 years at Monsanto overseeing various plastics divisions but also doing sales of food and pharmaceutical ingredients. Another seven years at PPG Industries gave her global exposure. At Spartech, she gained expertise in turnarounds.

To put Proto Labs on a fast-growth regimen, Holt wants to broaden the customer base beyond engineers. Different kinds of clients, she says, “need consultation, someone to advise them”. She raps the table with a growth chart, the one that projects company sales of $1 billion someday. In her excitement, she reverts to jargon: “The secret is executing so that our customers really can explode this part of our growth vector!”

Of course, explosions occur differently across the globe, and Holt knows it. Proto Labs has discovered, for example, that marketing “fast, cheap parts” to customers in Germany or Japan perversely suggests poor quality. In the US, the demand for increasingly intricate prototypes prompted Holt to acquire FineLine, a 3-D printer company.

Holt is also re-engineering Proto Labs. As the company expands and the complexities multiply, the biggest challenge, she says, is having everyone “stay aligned”. She needs more sales and marketing staffers who know every aspect of its proprietary custom parts; more developers to make the front end—the automation of quotes, uploading 3-D CAD files, choosing the right materials—more intuitive and customer-friendly, as well as to write and maintain the software that runs the plant; and more skilled factory workers who can manage work flow in addition to operating the machinery on the floor.

Not easy luring the talent. A popular refrain: “Millennials don’t want to live in Maple Plain”. Competing with the likes of Honeywell and 3M for engineers is one thing; convincing folks to move from Silicon Valley to a region that spent half the year in the grip of the Polar Vortex is an almost hopeless challenge. So Holt is sending out missionaries to local schools to tell kids about the opportunities.

Little surprise that Holt feels a tad skittish about keeping the developers she has. “You’ve got to whisper in here,” she says, gesturing to the hoodies hunched over screens in a bullpen segregated from the rest of headquarters. “We’ve added a lounge area. I mean, it’s not Google, but you know.” She smiles. “I think maybe we should add a lava lamp.”