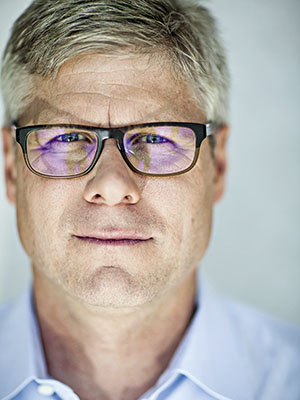 Steve Mollenkopf had one of those years in 2015 you don’t want to relive anytime soon. The CEO of Qualcomm, the San Diego semiconductor firm with technology in most high-end smartphones, lost Samsung as a customer for the year, had difficulty collecting licensing royalties from China’s emerging smartphone giants, dealt with rumours that its top-of-the-line chips were overheating and narrowly escaped an effort to break up the company from activist hedge fund Jana Partners. Revenue for the year fell 5 percent to $25.3 billion, and net income dropped 34 percent to $5.3 billion.

Since Mollenkopf took over as CEO two years ago from Paul Jacobs, the son of Qualcomm co-founder Irwin Jacobs, the stock is down nearly 32 percent—erasing more than $42 billion in value—with most of that loss happening over the last year. “The company is 31 years old, and I’ve been here for 21 of those years,” says Mollenkopf, leaning back in his office chair on a typical sunny day in San Diego late last year. “For the first 29 of those years, there’s been almost infinite growth in the handset business. That market has really dominated our business.”

Except now the market isn’t growing like it used to. Industry volumes rose 13 percent last year, down from 24 percent in 2014. All the high-end Android phonemakers (read: Qualcomm’s biggest customers) such as Samsung, LG, Sony and HTC faced severe slowdowns, and the only company making a substantial profit in smartphones is Apple, which buys less expensive components from Qualcomm.

Ups and downs are part of Qualcomm’s history. Every time wireless technology has made a generational leap—from analog to digital, and then from 3G to LTE—Qualcomm rode the lucrative updraft because its patents covered much of the key intellectual property behind each new stage of cellular technology. Mollenkopf oversaw crucial aspects of many of these transitions. He led its chip business during the 4G launch and was president and COO when the company rolled out its Snapdragon processors. “People were saying Qualcomm was a one-trick pony,” Mollenkopf says. “I think we proved them wrong.” But after each transition played out, Qualcomm often lost momentum. The next big transition, from LTE to fifth-generation wireless (5G), won’t be under way until 2020.

Qualcomm appears to be winning some Samsung business back in certain markets with the next version of Snapdragon, but the damage has been done. In abandoning Qualcomm, Samsung proved it was perfectly capable of building its own high-end smartphone chip for Western markets. “Qualcomm has the best mobile chips in the world, but the gap with the competition is getting narrower,” says Bernstein Research analyst Stacy Rasgon.

Mollenkopf, referred to by his colleagues as “cerebral” and “professorial”, has been taking some steps to get Qualcomm off the smartphone roller coaster. He’s focusing his executives on attacking new markets: Anand Chandrasekher for servers, Patrick Little for automotive and Raj Talluri for drones and internet-connected devices, such as lightbulbs, thermostats and watches. The mobile chip division also received its own reshuffle: Mollenkopf got rid of the confusing co-president structure by promoting Cristiano Amon as sole president late last year—and demoted Murthy Renduchintala, who was promptly snatched up by Intel for a major new executive position.

Ten years ago Qualcomm’s CEO could count on his fingers and toes the customers that mattered—maybe a couple dozen cellphone makers and telecom networking companies. These days Mollenkopf has to talk with CEOs in every major consumer-product category. “We have the technology that these companies need. We just have to figure out how to fan out to 15 different industries trying to take advantage of that,” Mollenkopf says. “Not unlike with the military, you need a huge army to go after land forces, and you need submarines and ships to focus on new markets. That’s essentially what I’m doing with the company.”

In 2014, selling chips outside the handset industry, Qualcomm grossed about $1 billion, or 5 percent of its semiconductor products business (which generates roughly two-thirds of its total revenue). Mollenkopf expects that share will rise to 10 percent this year, or $1.7 billion. The auto segment has begun bearing fruit with the announcement that 2017 Audi vehicles will come equipped with Qualcomm chips to power their infotainment systems.

But none of these new markets can deliver smartphone-like volumes. The car industry sold 80 million vehicles globally in 2014, compared with 1.5 billion phones sold. Consumer drones was a 400,000-unit industry in 2015, according to CEA Research.

Bernstein’s Rasgon still worries that the executive team is in denial. Management has guided its earnings estimates below Wall Street consensus in 11 of the last 12 quarters. The overall semiconductor industry is slowing and consolidating, and most of Qualcomm’s peers have turned quickly to buying their way to growth. The chip industry had $145 billion in M&A deals in 2015, up from $46 billion the year before, according to Dealogic. Some of the biggest included a $40 billion merger of NXP and Freescale, Avago Technologies’ $38 billion purchase of Broadcom, and Intel’s $16.7 billion acquisition of Altera.

Qualcomm? It paid $2.4 billion in August for CSR, a market leader in Bluetooth radio chips for cars. “Qualcomm’s head has been in the sand until recently about the nature of the situation,” Rasgon says. “Steve and the entire management delayed the recognition of structural shifts in the market. They got fat, dumb and happy.” With the company share price at $45, Rasgon still isn’t sure it has hit rock bottom.

Qualcomm is getting more serious about dealmaking, hiring Brian Modoff from Deutsche Bank Securities to run M&A, reporting directly to Mollenkopf. But Modoff is likely to find there aren’t a lot of juicy takeover targets left.

“Our culture is one of change and ­exploration,” Mollenkopf says. “In our 30-year history, these are probably among the hardest problems we’ve had to solve. That being said, I think we’ve gotten through them.”