With American malls on life support, Los Angeles's Caruso is doubling down on his successful model by embracing the past, while learning from ecommerce 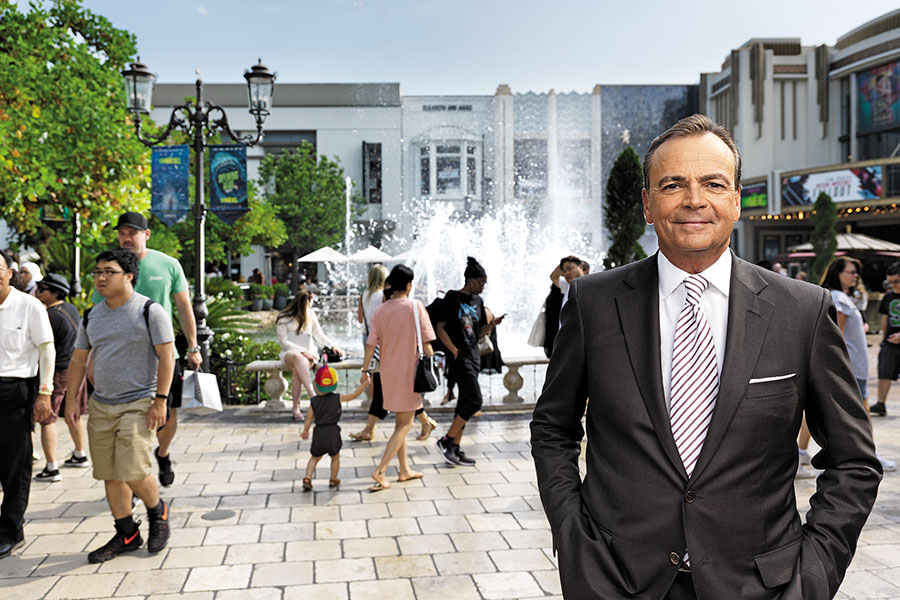 Making a splash: Rick Caruso at his signature property in Los Angeles, The Grove. At 3,400 square feet, the dancing fountain is larger than the average American home
Image: Ethan Pines for Forbes

To understand The Grove, the 575,000-square-foot shopping Xanadu in central Los Angeles, let its owner, Rick Caruso, introduce you to its neighbour, the iconic Farmers Market. He takes you to a butcher stall where, some 80 years ago, Caruso’s father was sweeping the floor. Next he points to a pizza stand founded by Patsy D’Amore, who baked LA’s first pie in 1939. “I grew up on his knee,” he says. Dapper in a custom suit and striped tie, Caruso weaves his way through the chaos, frequently stopping to ask merchants, “How’s business?”

It’s the same question Caruso asks of his own tenants, who have put this 59-year-old real estate developer on The Forbes 400 at No. 179. While the Farmers Market is gritty and authentic, The Grove is the pinnacle of artificial grandeur, where every detail matters. The copper garbage-can lids are polished. If a child drops an ice cream cone, a security guard will swiftly appear with a fresh scoop. Male employees must wear ties unless the temperature tops 85 degrees. Caruso obsesses over the positioning of trees, which arrive on his properties fully grown. A practising Catholic, he begins planning for Christmas a year in advance and started his own Santa staffing business because the agency options didn’t meet his north of the North Pole standards.

And after all these years, Caruso hasn’t forgotten the lessons he learned growing up around the Farmers Market. “If you provide something that is unique and relevant, in a setting that people find captivating, you will do well,” he says. “Retail has gotten sideways because it became the commodity. It is not about being high tech; it is about understanding what your customer wants.”

The numbers suggest Caruso knows that lesson well. The Grove’s 58 stores and restaurants welcomed 20 million visitors last year, more than the Great Wall of China or Disneyland. Its $2,200 sales per square foot puts it behind only Miami’s Bal Harbour Shops in the United States. ­American malls average about an 11 percent vacancy rate (excluding anchors), but Caruso says The Grove has a three-year waiting list. Most of the industry gives away space to glamorous anchor tenants; Caruso gives nothing away and also takes a percentage of sales.

“You pay more, but you get more,” says Rocco Basilico, who runs retail for Ray-Ban in North America. He says the brand’s tiny Grove location has the highest sales per square foot of any of his US stores. The Grove’s Dominique Ansel bakery (of cronut fame) does more business than the New York original, and the movie theater, which Caruso operates, is among the 10 most productive per seat in America.

The Grove and his nine other lightly mortgaged shopping centers in the area have made Caruso worth $4 billion. Caruso hopes his four children, ages 18 to 28, will take over the empire one day.

If all of this success seems to contradict the further decline and fall of brick-and-mortar retail in 2018, there’s good reason. Caruso is among a few optimistic developers betting—at least until Amazon can deliver human interaction—that stores will continue to pay off. Indeed, Caruso insists that Amazon is great for his business. Online retailers understand their customers, he says. His job is to understand the customers at his malls. 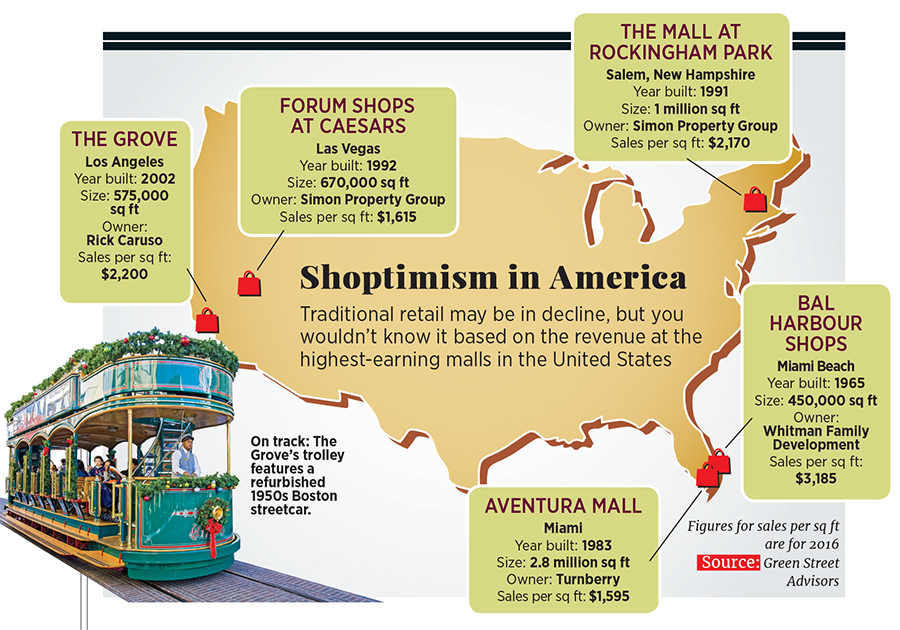 While Rick Caruso wasn’t born into a real estate dynasty, he seemed destined for entrepreneurship. His father, Hank, went from sweeping up at the Farmers Market to starting Dollar Rent A Car. (He sold the company in 1990 to Chrysler for a reported $80 million and died last year at 95.) Hank gave Rick, who got degrees in business at the University of Southern California and law at Pepperdine, his first taste of real estate by having him buy land in southern California and lease it to the car rental operation. When Rick lost his job in 1987—the law firm employing him collapsed financially—the transition to a new career was relatively easy.

Caruso tried his hand at industrial real estate, but it bored him. In 1992 he turned to retail with 333 La Cienega, in LA’s Beverly Grove neighbourhood. He leased it to now-defunct Loehmann’s for two decades and is currently redeveloping the land as a mixed-use project scheduled to open in 2020.

With every new property Caruso opened through the 1990s, he expanded the concept of what a shopping center could be. The Encino Marketplace introduced green space and a fountain. The Promenade at Westlake was curved so you could see where you were heading as you walked.

“Developers would build straight or flat because it was less expensive,” explains Caruso, who still considers himself a bit of a real estate outsider. For the Commons at Calabasas, Caruso hired a Hollywood set designer.

With The Grove, which opened in 2002, Caruso finally put together all that he had learned. He got inspiration from Charleston, South Carolina, and Savannah, Georgia, translating wide streets and low building heights into his new open-air shopping center, where a green-and-gold trolley designed by one of Walt Disney’s Imagineers shuttles visitors the quarter-mile from one end of the mall to the other.

The Grove’s common area adds up to an acre. Competitors scoffed at the wasted space, but a movie studio recently paid $600,000 to use it for a two-day stunt. A paid promotion this summer involved a giant Amazon box, a Jeep Wrangler and the latest Jurassic Park reboot. Caruso earns an estimated eight figures in annual revenue from advertising at The Grove, according to industry sources.

“As a company, philosophically, we are in the hospitality business,” he says. Empty stomachs and full hands are among the main reasons shoppers leave a retail property, so The Grove has 25 con­cierges to make dinner reservations and bring packages to shoppers’ cars. Caruso claims visitors stay for an average of three hours—the industry norm is 90 minutes—and 93 percent make a purchase.

Mall sceptics say frills cut into profit margins. But some of the biggest competition is coming around to Caruso’s way. Westfield reopened a 1.3 million-square-foot property in Century City last year after a $1 billion renovation. The property, about five miles west of The Grove, features landscaped outdoor plazas with lounge areas, concierge services for stylists and costume designers, and open space for concerts and film screenings. “What Rick Caruso has done is where retailers are heading,” says Indy Karlekar, managing director of real estate investments for Principal Global Investors and an LA resident.

In September Caruso opened Palisades Village, a circa-$200 million mall in Pacific Palisades, an affluent area on the west side of Los Angeles. When seven-year-old Sophie Herron learned that the nearby Baskin-Robbins was closing, she started a petition with local kids to save the shop. The movement failed, but when Caruso received her petition and video, he knew just what to do. In September, McConnell’s Fine Ice Creams, a 70-year-old brand from nearby Santa Barbara, opened its sixth shop in Palisades Village, just minutes from Herron’s doorstep.

This, Caruso believes, is the future of retail. Good retailers—and by extension good retail developers—cater to the community. “That is why Amazon has done so well in the book business,” he explains. “They curate the selection based on the data they have from that neighbourhood.”

Not every community has welcomed Caruso with open arms. He was recently forced to scrap plans for a 200-acre mixed-use project in Carlsbad, near San Diego, after residents rejected his proposal for its environmental impact. The residents of the Palisades have also extracted, besides an ice cream store, some more costly concessions: an extra level of parking in the underground lot, a community center and redesigns for shops abutting a residential street so its homeowners (who paid as much as $5.7 million) could forget they were looking at a mall.

At Palisades Village, Caruso combines 48 small high-end stores and restaurants with eight luxury residential rental units. Forty percent of the merchants are firms that started out in e-commerce; indeed, six have never had a brick-and-mortar store before. A prime corner lot ­houses an Amazon Books. “We could take the whole Palisades project, the retail portion of it, and put it inside the Nordstrom at The Grove,” Caruso says.

Caruso made his first big move into residential development in 2012 with a glamorous 87-unit rental property, opened his first office building in 2016 and is now developing his first hotel, Rosewood Miramar Beach Montecito, a five-star resort that’s taking reservations for January 2019. Every Wednesday, Caruso leaves his estate in Brentwood and flies up the California coast to visit the new hotel. A partnership with Rosewood Hotels & Resorts, the property will have 161 rooms beginning at $695 for opening night, but even here, Caruso is leaning hard into the idea of community. Unlike many high-end resorts, the campus will be open to the public, inviting locals for movie nights and beach barbecues, as well as to shop at the second store for Gwyneth Paltrow’s Goop brand.

Aboard his preferred dual-engine Sikorsky S-76 helicopter, Caruso turns into a tour guide, explaining the science of fog, calling out Venice Beach, the Getty Villa and Malibu’s history as a dairy farm. There’s also the house he owns on Malibu beach and Invictus, his 215-foot yacht.

When he’s not focused on real estate, Caruso remains devoted to his alma mater. In May he became chairman of the USC board of trustees. He is leading an investigation into allegations of nearly three decades of sexual misconduct by a gynaecologist and the school’s handling of the claims. That will make him more visible, although Caruso and his wife, Tina, a former swimsuit model, are already pretty well known to celebrity watchers in California.

Such a high profile has positioned Caruso well to run for mayor of Los Angeles in 2022. Although he hasn’t made any public declaration of his intentions, he admits he’s seriously considering it. When it comes to his properties, no detail is too small or expense too big, so it’s difficult to see how that philosophy would play in city hall—let alone in Sacramento or Washington, D.C. (If the real-estate-developer-turned-politician scenario sounds familiar, don’t tell Caruso. The suggestion that he has anything more in common with Donald Trump than being an American alive in 2018 mortifies him.)

Loath to be typecast, the right-leaning Caruso has supported Democrats, including California governor Jerry Brown. In 2016 Caruso donated $244,600 to New Day for America, a pro-John Kasich super-PAC. During the campaign, he even joked that Trump was banned from The Grove. (He wasn’t.) And while the president may be welcome, Caruso did bar boxer Manny Pacquiao from visiting The Grove for making anti-gay comments days before a scheduled television appearance on the property.

Today, Caruso says, everyone is welcome at The Grove. After all, it’s good for business.

Tweets by @forbes_india
Airbnb: New tricks for an old unicorn
Of spooked auditors and sinking fortunes