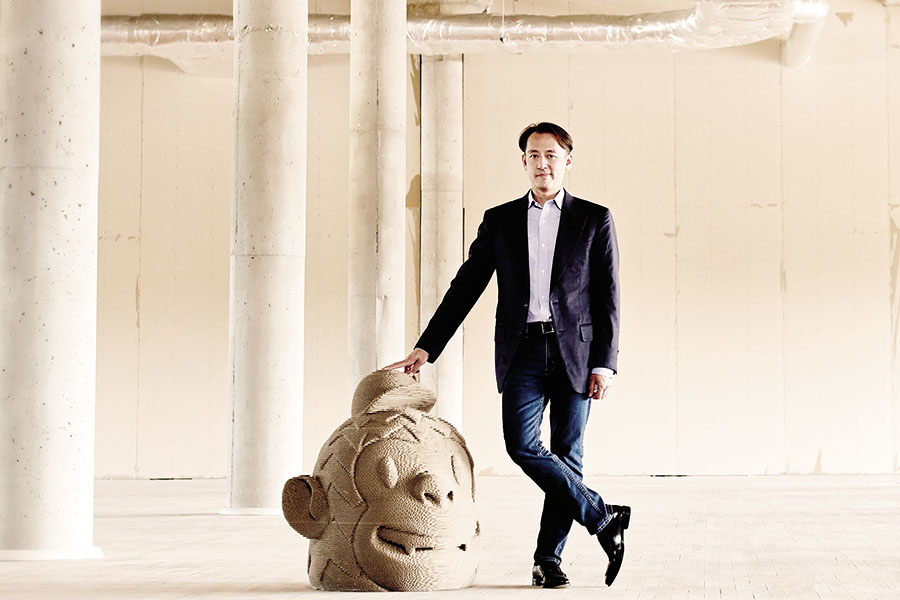 Mailchimp CEO Ben Chestnut leans on a cardboard sculpture of his company’s mascot, Freddie, in the lobby of its Atlanta headquarters. His mission: To help business owners succeed. “When a small business fails, the whole family feels it.”
Image: Jamel Toppin for Forbes

Two years ago, Ben Chestnut found a crumpled piece of paper in the trunk of his Mercedes GL63 SUV, alongside the muddy shoes and helmets he uses while mountain biking in the hills of northern Georgia. Forgotten there for a year, the paper assessed how much a top private equity firm in New York thought his company was worth: $2 billion. The CEO of Mailchimp stashed it in his personal safe along with the business cards of some America’s deepest-pocketed financiers—for his wife to shop a sale in the event of his death, but not a minute before. “That’s my retirement plan,” Chest­nut quips.

The Forbes 400 newcomer has good reason not to rest. Chestnut and his co-founder, Dan Kurzius, have both profited richly from their patience. With $600 million in revenue, Mailchimp is in the black and has more than doubled its estimated valuation to $4.2 billion in the last two years, giving Chestnut, 44, and Kurzius, 46, its sole owners, stakes worth $2.1 billion each.

Mailchimp’s success is built on the backs of America’s small business owners. Its most popular service—email marketing—might seem a low-tech, unsexy medium in 2018. But small business owners usually can’t afford marketing teams or social media pros. To the 20 million people on Mailchimp today, the ability to send a sleek, on-brand email with just a few clicks can mean the difference between bankruptcy and success.

Chestnut and Kurzius have worked to keep that lifeline affordable: Mailchimp’s customers pay nothing for the first 2,000 subscribers or 12,000 emails sent, and then $10 a month after that. The low cost translates potentially into a big upside. At Stringjoy, a Nashville-based maker of custom guitar strings, owner Scott Marquart says every dollar he spends on sending a weekly email through Mailchimp’s software is good for $20 in new sales. “Customers feel like they know me,” he says.

In Chestnut’s office at Mailchimp headquarters, an old Sears warehouse northeast of downtown Atlanta, there’s a photo of a boxing glove accompanied by an apocryphal Mike Tyson quote: “Everybody has a plan until they get punched in the face.” Chestnut is no boxer—though he met his wife in high school in karate class—but he relishes the sentiment because his career started by absorbing a couple figurative jabs to the chin.

The son of a serviceman and his Thai spouse, Chestnut transferred to Georgia Tech in 1994 to study industrial design, only to realise he wanted to learn how to build websites—something the school didn’t teach in the mid-1990s. So he taught himself by reading technical books in the aisles of his local Barnes & Noble and eventually got a job at Cox Interactive Media. Once there, Chestnut hired Kurzius, a part-time DJ and former competitive skateboarder who’d bluffed about his own coding skills, to work with him on the company’s dot-com-era MP3 music service. After just a few months, the unit folded in the tech crash.

Kurzius landed elsewhere at the company, but Chestnut was laid off, spending the next few months as a freelance website builder. He still remembers the sting of losing his job. “What a feeling that was, walking out with a box in your hand,” he says. But Kurzius and Chestnut kept tinkering together, first on an e-greetings site and then a service that had personal resonance. It wasn’t just Chestnut who had found himself jobless in the spring of 2000. Kurzius had witnessed his father’s bakery go bankrupt; Chestnut’s older sister lost her hair salon. What if a simple site could allow small business owners to easily email their most loyal customers? It might not save them, but it certainly couldn’t hurt in an ever noisier and more competitive environment.

Mailchimp, named after their most popular ­e-card character, launched in 2001 and remained a side project for several years, earning a few thousand dollars a month. Then in 2007, when it hit 10,000 users, the two decided to commit full-time. Mindful of what can happen when outside investors get control, they shunned venture capital cash and bootstrapped from their profits instead, vowing to ship a new feature each month to outpace their better-financed competition.

Mailchimp pitched employees on profit-sharing over equity stakes, and stability over rocket-ship growth. But it grew at a viral clip anyway, on the strength of word of mouth and savvy marketing, like its 2015 sponsorship of the breakout podcast Serial. Email remained its bread and butter, but Kurzius started canvassing customers about the features they wanted next, making eight to ten cross-country trips each year to talk to small-scale entrepreneurs. Identifying himself as just “Dan,” he learned that store owners and small business operators wanted help advertising on Facebook, Twitter and Instagram. So Mailchimp added simple tools to run social media campaigns. Ease of use remains a high priority.

“Mailchimp has made my life easy,” says Hrag Kalebjian, a third-generation coffee roaster at Henry’s House of Coffee in San Francisco. “It lets me focus on the other parts of the business and not worry about leakage of people going out my back door.”

Now, after months of behind-the-scenes work, Chestnut and Kurzius are unveiling what Chestnut calls “Act Two.” Some new efforts are decidedly low-tech, such as testing printed postcards; their customers sent 25,000 this summer. Others are much more sophisticated. By tracking a business’s customer base across every point of interaction—Facebook, email or in-store, for example—Mailchimp wants to supplement the email lists that gave the company its start, adding more targeted groups: say, customers who haven’t made a purchase in the last six months. Such capabilities are already standard with much more expensive software, like Salesforce; Mailchimp is trying to make them affordable for small businesses. “We can democratise that technology,” says John Foreman, Mailchimp’s head of product. “Like stealing fire from the gods.”

That new challenge keeps Chestnut and Kurzius locked in to what both see as lifetime tours of duty with Mailchimp, even as they launch families. And family foundations: Chestnut’s is first, allocating $10 million to help Georgia non-profits. Go public? Not worth the headache, Chestnut says. Sell? The founders look incredulous. “To this day, it’s just a fun feeling that we can help,” Kurzius explains. Chestnut chimes in: “I want people to see that the past 17 years were just a warm-up.”