Tommy Hilfiger drove his eponymous all-American fashion brand into the ground with a glut of cut-rate merchandise. Now a pair of savvy European saviours are bringing it back 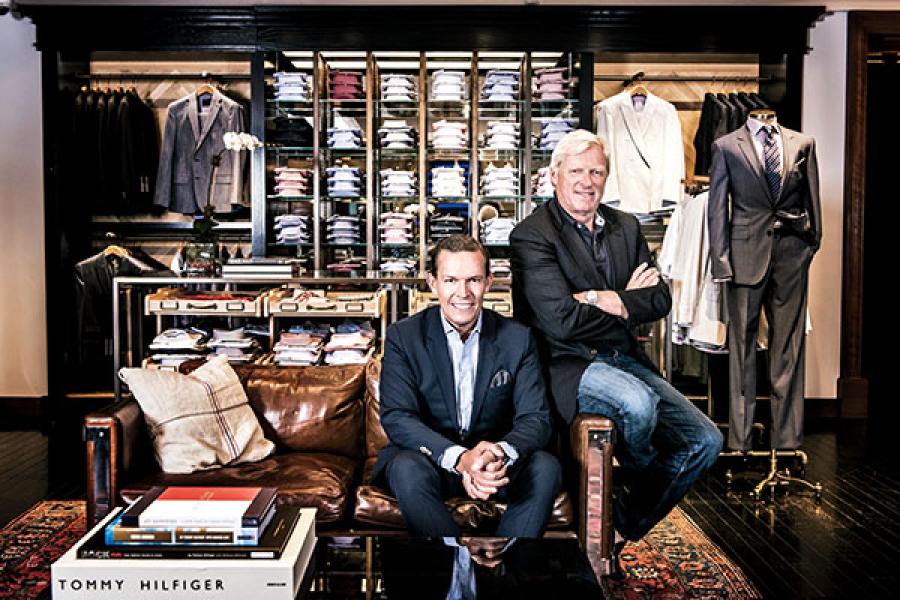 In Manhattan’s cavernous Park Avenue Armory the thrum of the Rolling Stones’s ‘Sympathy for the Devil’ blared as Mick Jagger’s 22-year-old supermodel daughter Georgia sashayed down the catwalk. Vogue’s Anna Wintour was in the front row. So were the daughters of rock royalty like Keith Richards, Simon Le Bon and Annie Lennox, firing off shots on Instagram (#tommyspring15). Kendall Jenner of clan Kardashian closed out the show strutting in a sheer, braless dress, driving her 25 million social media followers wild. The message of Tommy Hilfiger’s New York Fashion Week show was as transparent as Jenner’s top: After a long and painful fall, he’s back.

Once the official outfitter of the ’90s’ hip-hop set, hitting $2 billion in sales in 2000, Hilfiger’s business imploded amid a sea of overexposure and baggy, logoed merchandise that fast fell out of fashion. “We made the mistake of following a trend that was going to be short-lived,” says Hilfiger, 63, “because any trend is short-lived”.

But now the brand is hot once again, thanks to a pair of savvy European businessmen: Daniel Grieder, 53, Tommy Hilfiger’s immaculately groomed Swiss CEO, and his Dutch predecessor, Fred Gehring, 60, both former stewards of the Hilfiger brand abroad. And while they’re longtime Tommy loyalists, they’re brutally honest about the mess they inherited. “It fell off a cliff,” Gehring says of the American part of the business. They bought the company with the help of London-based private equity firm Apax Partners in 2006 for $1.6 billion.

To save Tommy Hilfiger, they’re breaking all the rules of modern retail: Raising prices, tailoring clothes smaller, alienating customers and cutting off stores. It’s a counterintuitive strategy, but it’s working. Worldwide revenues hit a record $3.4 billion in 2013, up 7 percent from the year before (for perspective, sales were $1.8 billion in 2005, during the brand’s slump). Cash flow as defined by earnings before interest and taxes increased 10 percent to $479 million, with growth not just in the expected emerging markets of Asia and South America but also in Europe and North America, where competitors like Michael Kors and Hugo Boss have struggled.

“At first glance, you wouldn’t recognise how this brand has come from the depths,” says Brian Sozzi, retail analyst and CEO at Belus Capital Advisors. “They’ve peeled back on distribution. The quality has improved. And I think they’ve broadened out who that Tommy Hilfiger customer is.”

Hilfiger’s is a legendary fashion success story—or at least it was for a while. After starting out in the late ’60s selling bell-bottom jeans and hippie threads on college campuses near his hometown of Elmira in upstate New York, Tommy Hilfiger became the first fashion company to float on the New York Stock Exchange, raising $47 million in 1992 while clocking $107 million in sales ($80 million and $180 million in 2014 dollars, respectively). By the mid-1990s Tommy Hilfiger’s oversize jeans and puffer jackets became the teen uniform of the era. “All the preppies, all the cool kids, the surfers, the skateboarders—everyone was wearing it,” he says. A 16-year-old Beyoncé and her group Destiny’s Child wore his denim overalls over logo bikini tops to a 1998 photo call. The designer dressed the 17-year-old breakout star of the day, Britney Spears, for her ‘Baby One More Time’ tour in 1999.

But by 2000, when revenues reached the $2 billion mark, Hilfiger had gotten greedy. What started as a preppy menswear label making colourful button-downs was now selling $20 T-shirts, accessories, perfume, sunglasses, bags, homewares. His nautical flag logo was a mainstay of downmarket department stores. The company’s wholesale business—the sale of red, white and blue ephemera to Belk, Kohl’s, Dillard’s and anywhere that would take it—swelled to $1.5 billion in 2000.

Worse than market oversaturation was the brand’s descent into promotions, a dirty word in high-end retail that means “always on sale”. “It had become so bad that a shirt that was going to have a retail price of $69 was designed in such a way that even at markdown at $39, it would still make money,” says Gehring. 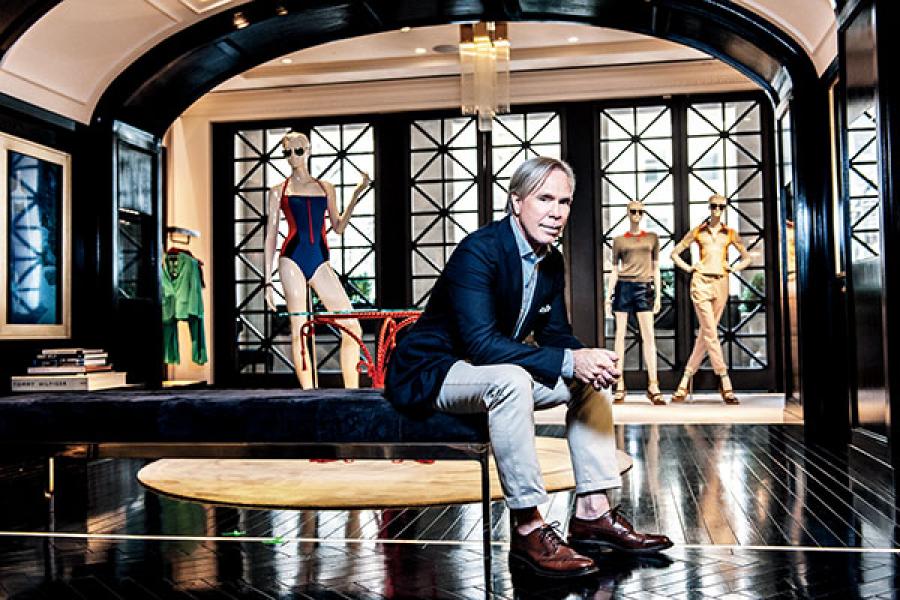 Image: Jamel Toppin for Forbes
Here’s the man: Tommy Hilfiger’s is a legendary fashion success story
By 2005, wholesale sales had slowed to $500 million. Even in Middle America, where Hilfiger’s inventory once thrived, no one wanted cut-rate Tommy T-shirts. Hilfiger felt it was his duty to figure out the next move for his floundering company, he says. “In reality, the answer was sitting right in front of us. It was in Europe.”

Indeed, under Gehring and Grieder, the European business had grown from zero in 1997 to just under a billion in 2008 without any trace of the enormous logos and cheap price tags that defined Tommy Hilfiger in the US. After being offered what he calls “crummy” terms from US banks that only knew the brash Tommy Hilfiger brand of old, Gehring led a 2006 $1.6 billion management buyout with the help of Apax, which had seen the strength of the company in Europe.

After taking the company private, new worldwide CEO Gehring and second-in-command Grieder set about remaking stateside Tommy Hilfiger in its European image. They laid off 40 percent of the company’s employees and shrank the US wholesale business, yanking low-quality merchandise from thousands of department store shelves. “The Apax investment was to ensure there was more money to make better products,” says Gehring. “And then we gambled on having to give much less discount. If we’d had to give the same level of discount, we would have killed ourselves.”

The two made a decision to focus on just one retailer as its sole partner, arguably the most powerful in US fashion and apparel: Macy’s. With almost 800 stores, the New York-based chain already represented about 60 percent of Tommy Hilfiger’s wholesale business. Gehring wanted to boost that figure to 100 percent.

Macy’s CEO Terry Lundgren remembers hashing out this exclusivity plan with Gehring in the summer of 2007, in the backyard at the home of Tommy Hilfiger’s first CEO Joel Horowitz during his daughter’s wedding. Horowitz had retired in 2005, but remained a Hilfiger friend and booster. “If we were going to do this, we were going to be fully committed,” says Lundgren. “We owned it, and we had to make sure we did everything in our power to sell it because he had no outlet other than us to move through the inventory.”

With control of so much of the US business, Lundgren and his team were able to ensure the Tommy Hilfiger clothing hitting the racks at Macy’s was up to snuff. Gone were the oversize jeans and tees. In came structure and slim-fit sweaters.

The company considered another IPO and started the road show process in 2007, right before the credit crisis rendered a float impossible. “We couldn’t ship to customers, as they couldn’t pay,” says Gehring. The company switched focus from profit-and-loss to paying down its debt.

In the US, the company has enjoyed PVH’s advantages of scale and been able to negotiate with suppliers and customers alike. The company spends about $170 million a year on glossy-magazine campaigns and billboards in international shopping capitals, helping fuel a boom that’s seen European business grow to $1.5 billion today—43 percent of the worldwide total. “Asia is up the most,” says Gehring, pointing to $135 million in revenues in China in 2013. “The farther east you go, the greater the growth.”

Hilfiger remains chief creative officer and familiar face of the brand. He’s involved in the runway shows, the advertising, the marketing, the overall aesthetic. He’s happy to leave the business side to Grieder and Gehring, who was promoted to vice chair of PVH this year. Says Hilfiger: “They run it like clockwork.”