The inside story of A-Rod's redemption, after baseball's biggest scandal

Four years after being in baseball purgatory, Alex Rodriguez has transformed into one of the sport's most respected analysts 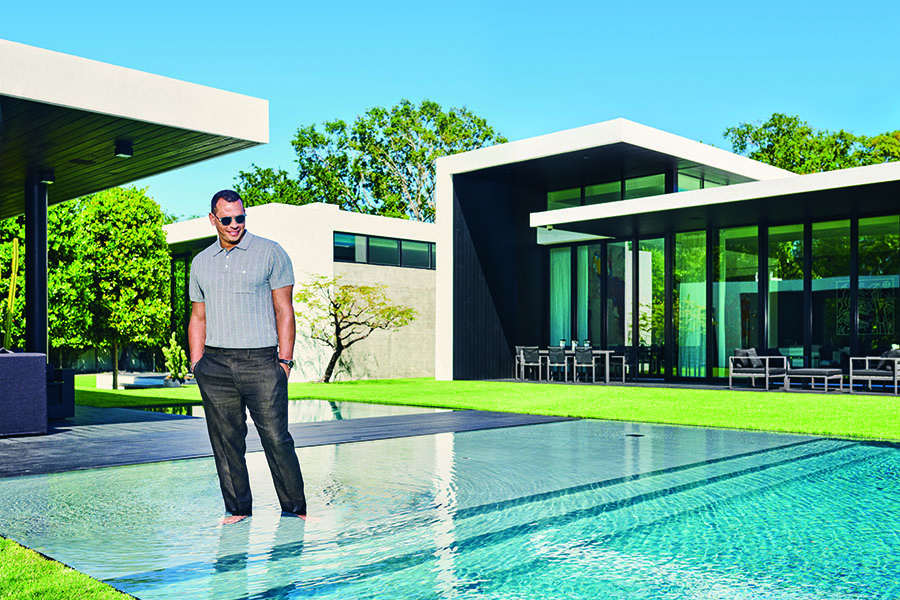 Safe at home: Rodriguez, at his Miami estate, has returned to the Yankees as a special advisor. “Alex has a great baseball mind,” says team co-owner Hal Steinbrenner, “and there’s great value to having him build relationships with our younger players, who are eager to learn and really respect him.”
Image: Michael Prince for Forbes

Even as Alex Rodriguez sits contemplating a platter of raspberries at the Four Seasons in Austin, he is chasing something. The day before, in preparation for his new gig as an ESPN Sunday Night Baseball analyst, he visited three teams at spring training in Arizona. Today in Texas, he gave a keynote address at South by Southwest titled “Baseball, Business and Redemption” with CNBC chairman Mark Hoffman. And later he’ll jet home to Miami to spend time with his two daughters before heading to Tampa to see the Yankees in his role as special advisor.

It’s all rather remarkable, considering how recently something was chasing him—namely, the spectre of performance-enhancing-drug (PED) use, which cost him the 2014 season and stamped an asterisk on the career of one of the most gifted baseball players of all time.

“I’m totally grateful for where I am today and do not take anything for granted,” the 42-year-old Rodriguez says. “And I felt that once I owned all of that and started digging myself out of this black hole, I wanted to come out a different person.”

What Rodriguez is chasing these days is redemption—and in the wake of his 2016 retirement, he’s finding it by analysing baseball and business. He debuted as a commentator for Fox last year before adding the ESPN job, remarkably coexisting with rival networks. Rodriguez also oversees A-Rod Corp, which includes real estate investments (13,000 units across ten states), conditioning companies (from UFC-branded gyms to TruFusion, a kettle-bells-and-hot-yoga outlet) and startups (with stakes in Josh Kushner’s health insurance company, Oscar, as well as the ridesharing service Didi and the eSports team NRG). He’s even made savvy moves with his own real estate, selling his Miami Beach mansion for $30 million in 2013 (twice the amount he paid) before building his dream home in Coral Gables. 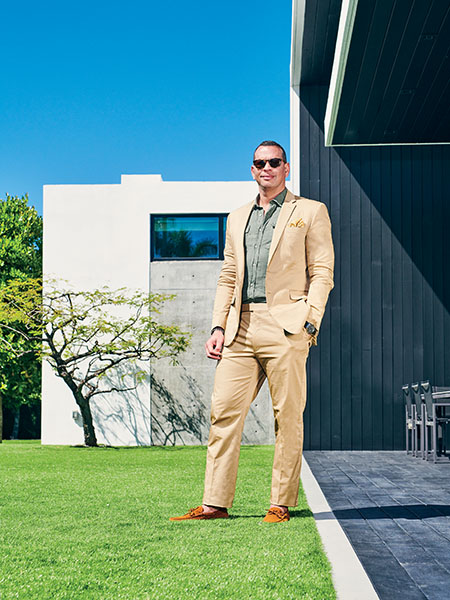 Stretch cotton sport jacket ($1,795) and stretch cotton trousers ($495) by Ralph Lauren; linen shirt ($645) and silk pocket square ($225) by Brunello Cucinelli; Suede Gommino driving shoes ($445) and leather bracelet ($225) by Tod’s. Classic fusion Aerofusion Chronograph by Hublot ($15,100)
Image: Michael Prince for Forbes
His real-life investing expertise landed him a guest spot on ABC’s Shark Tank in 2017, becoming the show’s first Hispanic shark. This year he’s displaying his coaching skills on CNBC’s Michael Strahan-produced Back in the Game, in which Rodriguez creates a financial plan for Joe Smith, a former No 1 NBA draft pick who squandered career earnings of $61 million. Says Hoffman: “It’s an opportunity to educate, which is also at the core of Alex’s redemption story.”

For Rodriguez, the curriculum began at birth. His father, Victor, ran a shoe store in New York City before moving his clan to the baseball-obsessed Dominican Republic and then to Miami. “I’ve always had passion and a dream to be both mainly a baseball player and a businessman,” Rodriguez says. “That’s what my father was, and I wanted to be like him.”

Victor abandoned the family when Rodriguez was nine; his mother raised her three children by working as a secretary in the morning and waiting tables at night. Rodriguez made his major league debut with the Seattle Mariners at the age of 18, almost immediately beginning his own second job—investing—with the purchase of a Miami duplex.

In 2000, he signed a record-breaking ten-year, $252 million contract with the Texas Rangers, its insurance underwritten by Berkshire Hathaway—prompting the shortstop to coldcall Warren Buffett. Rodriguez started flying to Omaha, where he’d spend hours in Buffett’s office going over A-Rod Corp’s finances and just as much time soaking up the Oracle’s wisdom at dinner.

“What Buffett says is ‘Pay a fair price for a great business, rather than a great price for a fair business’,” Rodriguez says. “Always try to buy the best, and forget the rest.”

Rodriguez also did everything  in his power to be the best on the field. While amassing 156 home runs in three years for the last-place Rangers, he tested positive for PEDs, unbeknownst  to the public until years later.

Rodriguez was so desperate to win that, to entice the Red Sox to trade for him in 2003, he offered to forgo $30 million in salary; the players’ union refused.

But when Yankee third baseman Aaron Boone—coincidentally, the man Rodriguez replaces in ESPN’s broadcast booth this year—injured his knee playing  pickup basketball, baseball’s most storied franchise acquired its top player. Even after shifting to third base in deference to captain Derek Jeter and plating 616 runs in his first five years, Rodriguez still couldn’t quite win over the team’s championship-addicted fans.

“There’s no way to prepare or to get used to playing and being a Yankee,” he says of his early years in the Bronx. Everyone says, ‘Oh yeah, I know [how] it feels to take a Mike Tyson punch’. Until he punches you out.”

But Rodriguez did find himself welcome on Wall Street, befriending such titans as Jamie Dimon, Barry Sternlicht and Sandy Weill. He talked baseball and sponged up business lessons, especially on protecting one’s downside. That soon proved relevant to his career: Though Rodriguez led the Yankees to a World Series in 2009, he was walloped with a 211-game suspension for PEDs several years later, after the league got its hands on records of his steroid use. He appealed, eventually getting the total reduced to 162 games. Rodriguez, initially defiant, finally started asking himself how someone with “pocket aces” ended up “losing his hand”.

“There is just no justification,” he says now. “What I learnt in my year was that I needed to understand and turn the lens inward.”

He spent 2014 coming clean to friends, sponsors, mentors and—hardest of all, he says—his daughters (Natasha, 13, and Ella, 10). He remembers Patriots’ owner Robert Kraft advising him to start building bridges, instead of burning them. After a while, Rodriguez found liberation in admitting his mistakes. He returned to the Yankees in 2016, improbably knocking 33 home runs at the age of 39—and powering the team to the playoffs.

“I felt different about myself when I came back,” he says. “Whether I was 4-for-4 or 0-for-4, I was going to still go home and sing Journey or Bon Jovi. And it was an incredibly different reaction… from the fans.”

Following his retirement, he soon earned stamps of approval from the Yankees (with his special-advisor role) and new girlfriend Jennifer Lopez. While the Bronx-born singer hosted Rodriguez at her Las Vegas concert residency, Rodriguez discovered and invested in TruFusion. He returned Lopez’s favour by inviting her—along with pals Strahan, Ryan Howard and Marshawn Lynch—to join him as an investor in NRG.

“He’s a collector of people, and he’s really great on trends,” says Andy Miller, co-owner of NRG and the NBA’s Sacramento Kings.

Rodriguez, who earned half a billion dollars pretax in his career, knows he could spend his time enjoying Hudson River views from his Upper West Side penthouse or lounging poolside in Miami. But one thing he still doesn’t fully know is when he’ll feel completely redeemed. And it seems this chase is what continues to motivate him.

“It’s a work in progress,” he says. “I’m either rounding first base or rounding second.”

Tweets by @forbes_india
Between the goalposts: The FIFA World Cup explained in numbers
The power of an idea meritocracy