The web’s anti-bullying, meme-spawning, porn-flecked link forum may go down as one of the shrewdest buys in the media business 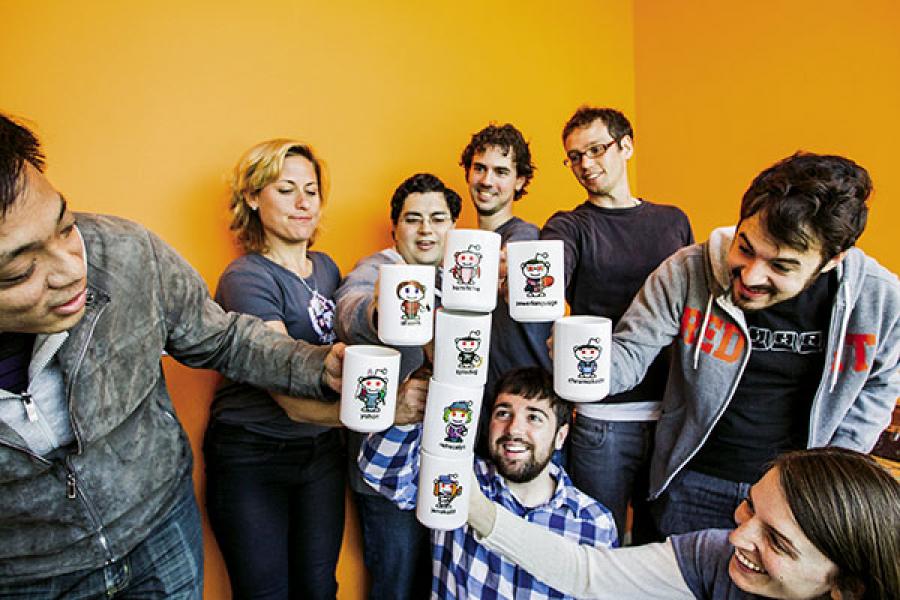 Not so for Advance Publications, the Newhouse-family enterprise famous for publishing the New Yorker, Vanity Fair and Vogue. Advance spent little more than loose change in 2006 to acquire Reddit, one of the internet’s edgiest news and comment sites. Now, Advance could be looking at a 30-to-1 jackpot on a fast-growing property that’s arguably worth $240 million or more.

“We did almost nothing to integrate Reddit into the rest of the company, and we probably should have done even less,” says Bob Sauerberg, the New York-based president of Advance’s Condé Nast magazine division. “We left Reddit in San Francisco and let it find its own way. Mostly, we wanted to make sure we didn’t screw it up.”

Reddit is a giant bulletin board made up of 185,000 active forums with their own obsessions: Science trivia, political arguments, videogame critiques, jokes and photos—lots of photos, of which more than a sprinkling are of cats or naked women.

Staffers hardly touch a thing. Instead, the site’s easy-to-post format turns scads of its young, mostly male, college-educated visitors into unpaid contributors, or Redditors. Despite a clunky user interface that has barely been updated since 2005, Reddit attracts 3.4 billion page views a month, putting it among the 70 most visited sites in the US and bigger by far than any of Advance’s other digital properties.

Reddit is way too bohemian to attract the elegant perfume and sports car advertisers that flock to Condé Nast’s upscale magazines, but it may not need big-spending sponsors to become a decent business.

By Forbes’ estimate, Reddit is a paragon of thrift, spending just $7 million a year to support a 22-person payroll and 75 servers rented from Amazon’s cloud. Those expenses are largely covered by a smattering of ads from movie studios, gaming companies, web domain registrars and the occasional big brand such as Autodesk.

“Reddit provides a super-engaged base and a ginormous audience,” says Aaron Magness, vice president for marketing at Coastal Contacts, which sells eyeglasses online.

Magness shrugs off the uproar over Reddit’s seediest posts, noting that Coastal advertises only on the site’s front page, which has filters that keep racy content away. “As long as we don’t participate in categories of Reddit that raise questions,” he says, “we’re safe.”

Big questions got raised last month over some of the site’s more offensive subreddits, and there are plenty of them, with names like upskirt, carcrash, rapejokes and PicsOfDeadKids. Most of that content is posted pseudonymously and lives on the outer edges of what’s tolerable under the First Amendment.

Last month, the website Gawker outed a 49-year-old computer programmer named Michael Brutsch for his role in “creepshots”, a subreddit specialising in voyeuristic photos of women. Brutsch closed his main Reddit account as his pseudonym Violentacrez was being exposed. Some Redditors avenged Brutsch by blocking Gawker links from appearing on Reddit, until Reddit’s 34-year-old CEO, Yishan Wong, called for peace.

“Look, I find this sort of content deplorable,” says Wong in an interview. “But when you support free speech, you very rarely end up protecting someone who is nobly in the minority. Most of the time you end up protecting—or appearing to protect—someone that everyone hates.”

Reddit’s notoriety today is a far cry from its early struggles to win attention on any basis.

The site was started in 2005 by two fresh University of Virginia graduates, Alexis Ohanian and Steve Huffman, after they couldn’t finance a previous brainstorm: An online food-ordering site. Reddit’s visitor traffic was so feeble at first that the founders spent hours posting content under a variety of fake names. Within months, a tech-savvy user base began to build. Ohanian created a zany aura, doodling up a goofy red-eyed alien named Snoo that became Reddit’s logo. Huffman, the engineer, cooked up clever algorithms that allowed users to vote intriguing submissions into prominence on the site’s home page, while dull material faded into oblivion. That made the site come across as being skillfully edited, even though software made the decisions.

By late 2006, Reddit had grown to 500,000 unique visitors a month, leaving Huffman and Ohanian exhausted with the demands of keeping the business running.

One of Ohanian’s female admirers knew an acquisition scout at Condé Nast, Kourosh Karimkhany. He sketched out a takeover proposal that would put cash in the founders’ pockets while letting them dial back their hours. Huffman, determined to be a hard-negotiating 22-year-old, told Condé Nast that it couldn’t buy Reddit unless the founders each got $1 million. Condé Nast’s negotiators tried not to smirk at the lowball figure and said: “We can do that.”

Exact terms haven’t ever been disclosed, but insiders say Reddit was bought for $5 million or less. Asked if he still likes those sale terms, Huffman ruefully says: “A million dollars isn’t as much as I thought it was.”

Since Condé Nast stepped in, Reddit’s user base has grown about 80-fold. The site’s ability to hive off new subreddits allows it to function like a giant city with lots of fascinating neighbourhoods, each catering to subsets of the human condition. If there’s any common denominator to the Reddit crowd, it’s a posture of libertarian, anti-bullying vigilance.

In January, Reddit blacked out its home page to protest the debate in Congress over anti-piracy laws that would put a lot of websites at risk. Wikipedia and Mozilla followed suit, and Google posted a link to a page protesting the piracy bills. Legislators were inundated with 10 million petition signatures, 8 million calls and 4 million emails. The bills were killed.

On the lighter side, Reddit’s Ask Me Anything (AMA) crowdsourced interview series is now an important stop on the publicity tour for movie actors, directors and authors.

Even Barack Obama has stopped in for an online chat. The results aren’t nearly as polished as a People magazine profile, but there’s a candour and unpredictability to each AMA that elicits millions of page views.

That question fascinates people in San Francisco’s startup-crazed SoMa district. One answer would be to look at its market value per user, a method often used by venture capitalists and stock pickers.

That’s the optimist’s case. Value Reddit strictly on the basis of its skimpy current revenue and its inability so far to turn a profit, and the site probably falls short of even $50 million.

A one-time competitor in social news aggregation, Digg, stumbled badly in the past 18 months, losing much of its audience and running into a cash squeeze. Digg ended up being sold in pieces for a reported total of $16 million.

The most pertinent clues to Reddit’s value can be found in the company’s incorporation papers, which were quietly updated in Delaware a few months ago. Advance has recapitalised Reddit, taking the site out of its Condé Nast division and allowing Reddit employees to own a sizeable minority of newly-issued stock.

As part of that recapitalisation, Advance bought $20 million of convertible preferred stock in Reddit and put in provisions saying that if Reddit is ever sold for less than $240 million, the conversion terms will be rejiggered so that Advance comes away with a bigger slice of Reddit and employees get less.

Those calculations imply that Reddit is already on track to be worth at least $240 million. If Advance owns two-thirds of Reddit, a guess that informed people don’t dispute, then the New York publishing company’s original $5 million purchase could yield a windfall of $160 million or more someday, for a 30-to-1 or better payoff.

With such a nice reward in store, Condé Nast’s Bob Sauerberg, who now doubles as Advance’s man on the Reddit board, can afford to seem blasé about the site’s current creepy-content tussles.

“Reddit will make its own judgements on what’s right for its business interests,” Sauerberg says. “We’re not imposing anything on them.” As he sees it, sustainable communities usually figure out how to minimise bad actors’ taint.

It’s CEO Wong who will feel more of the heat. A software engineer by training, he gained renown for his opinionated wit and skill in managing developers at PayPal and Facebook. Those were gruelling times, and Wong appreciates having been toughened up. “Everything ultimately becomes the CEO’s problem, no matter where it starts,” Wong says. “I can see why some CEOs crack under the pressure.”

Tweets by @forbesindia
Is Jacques Kallis Test Cricket's Unsung Hero?
One Woman, a hair dryer and a $20 million business