Jacques Kallis is within striking distance of Sachin Tendulkar's record of most Test centuries. Yet, we have heard so little about his batting 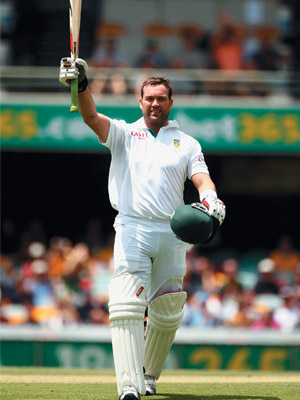 While Indian cricket fans are busy debating  Sachin Tendulkar’s cricketing future, a lesser-celebrated but almost as great a player has been climbing up the ladder.

Jacques Kallis, the South African all-rounder, could soon be the man to take away Tendulkar’s most prized achievement—that of maximum Test centuries.

Still why is it that Kallis’ ability to beat Tendulkar’s record appears somewhat sudden? There’s also a distinct unease among Indians while entertaining the proposition that a dourly Kallis could overwhelm the charismatic Tendulkar.

There’s a deep chasm in the way we rate Tendulkar (or even Laxman and Sehwag) as against Kallis. We have appreciation for many of India’s tormentors, like Shane Warne, Wasim Akram and Sanath Jayasuriya, but despite his high average and prolific scoring, Kallis fails to excite us.

Is it because he hasn’t played a memorable, impactful knock against us? Or is it because we value the Sehwag style of result-oriented, swashbuckling batting more than the Kallis (or even Dravid) kind of stealth and consistency? Would we have celebrated Kallis far more had he hailed from the subcontinent where the bulk of cricketing might resides?

Let us look at some numbers. Against India, Kallis has hit six centuries, three of them for a winning cause; but there’s a caveat: Kallis has bagged top honours only once. On the other two occasions, his teammates Hashim Amla and AB de Villiers scored bigger.

This is reflective of Kallis’ entire career. At the top of the order, he almost always sets up the match, while someone else comes along, scores a bigger hundred, turns the match on and hogs the limelight.
Out of the 42 Tests that fetched him his 44 centuries, his score was the highest [of the innings or of the match] on 15 occasions only. That is a telling statistic because there was invariably someone else, either in his team or in the opposition, who went on to score more than him.

That explains why Kallis failed to find a place in the worldwide poll for ICC’s Greatest Test Team in 2011, despite beating batting greats like Ponting, Dravid and Lara on most counts.

“I think Kallis is a connoisseur’s cricketer rather than a seat-grabber. He is like the concrete that holds up a building rather than the laminate that gives it the gloss,” says cricket commentator Harsha Bhogle.

In the 42 matches where Kallis has scored a hundred or more, South Africa has lost only thrice. Clearly, a Kallis century almost ensures that his team cannot be beaten.

But his influence is not limited to batting alone. Besides his centuries, he has often been tossed the ball at first change. He bowls long spells and picks up crucial wickets. But in bowling, too, the more celebrated regular bowlers in the South African side, Dale Steyn or Makhaya Ntini, end up stealing the limelight. (Kallis has picked up 282 Test wickets so far.)

Solely on the count of batsmanship, Kallis hasn’t given us any well-etched memory, unlike Ponting, whom one can imagine flicking the bowler over mid-wicket or Jayasuriya, cutting a short-pitched delivery for a six over third man.

Latika Khaneja, a well-known sports manager, has a far more brutal take on this. She feels that excitement and recall among followers are closely related to charisma. David Beckham and Tiger Woods aren’t the best, yet they sell because of Beckham’s maverick lifestyle or Woods’ fairytale story. “Kallis doesn’t have a story,” she says.

Let’s put it to test.

If you have to recall one outstanding memory of Jacques Kallis, Jonty Rhodes, Allan Donald and Lance Klusener, what comes to your mind first?