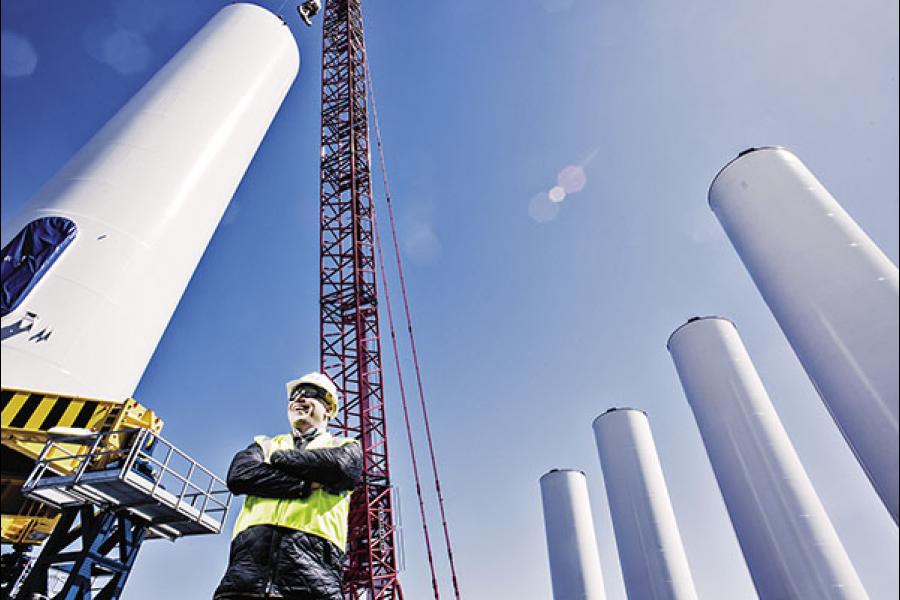 For centuries, the fierce winds that sweep Block Island have wrecked ships and attracted pirates. Captain Kidd is said to have buried treasure there. Amelia Earhart in 1929 landed her plane on a grassy field and tested out a metal diving suit. This year, a little farther offshore, a fleet of ships, cranes and barges is making some more Block Island history—installing America’s first-ever offshore wind farm. Steel foundations for five General Electric (GE) wind turbines have already been anchored to the seafloor under 90 feet of water. Once completed, the machines will rise 600 feet above the waves, twice the height of the Statue of Liberty and bigger than any onshore turbine. Impressive, and yet on an average day this $300 million, 30-megawatt (MW) installation will generate only enough clean power to supply about 10,000 homes, or 1.5 percent of Rhode Island’s power needs.

That’s why we need more monstrous turbines—thousands more, says Jeff Grybowski, CEO of Providence-based Deepwater Wind, which owns the project. He sees Block Island’s five windmills as buzz saws, cutting a path for vast offshore developments in the waters off Massachusetts, New York and New Jersey. It is a viable, if expensive, source of zero-emission energy: It would take 200 of GE’s monsters to replace the power output of the 600 MW Vermont Yankee nuclear plant, which was mothballed at the end of 2014.

Europe installed its first offshore turbines 25 years ago. What took America so long to get into the game? Lawyers, largely. In the US, the dreams of developers have been blunted by attorneys for powerful people like the Kennedy clan and billionaire William Koch, who for 15 years have fought the plans of Boston-based Cape Wind to install hundreds of turbines in Nantucket Sound, within view of their Martha’s Vineyard mansions. That $2.5 billion project will likely never get built.

Still, Grybowski chafes at the idea that the Block Island farm is just a pilot. “This is not a science project, not an R&D project—it’s a commercial project,” he says. “We’re free riding on the technical innovations that the Europeans have made.”

And to be clear, Deepwater Wind is also free riding on Rhode Island’s ratepayers, who will end up paying vastly more than market rate for their wind power. Grybowski’s real accomplishment here is not the building of the wind farm, but rather that he got Rhode Islanders to pay so much for its output. Under the company’s 20-year agreement with Rhode Island’s regulated utility, National Grid, Deepwater Wind will receive 24.4 cents per kwh for all the power those turbines can generate. That’s more than twice the wholesale price that National Grid pays for electricity now. And a lot even for New Englanders used to paying 17 cents per kwh. The average American pays 10 cents.

Worse, the contract has a built-in price escalator of 3.5 percent per year. That means by the end of the 20 years, National Grid will be paying Deepwater 50 cents for each windy kwh. While Deepwater would not comment on financial projections, Forbes calculates that if GE can keep those turbines in working order, the wind farm could generate $900 million for Deepwater Wind and its majority shareholder, DE Shaw & Co. Add in about $100 million in federal renewable energy investment tax credits and Deepwater Wind is looking at a juicy, unleveraged pretax return on the order of 7.5 percent. It is a legally guaranteed, risk-free money machine.

So how did they pull this off? Connections. A decade ago, Grybowski was chief of staff to then Governor Don Carcieri, who pushed the Rhode Island General Assembly to back offshore wind as a way of diversifying the tiny state’s power supply. Grybowski, an attorney, left Carcieri and went into private practice in 2007. Two years later, the state passed a bill to support offshore wind. The state took it upon itself to study wind speeds, talk to fishermen and boaters, and contemplate the effect that pile-driving would have on migrating whales. It was the state that chose the Block Island site and, to use Grybowski’s word, “deconflicted” the project.

In 2008, Rhode Island decided to hold an open-bidding process for companies keen to build the wind farm. Grybowski got a call to work with Deepwater Wind, owned by DE Shaw, and they put in a bid. Up against six other companies, Grybowski won. At 30 megawatts, it was far more modest than what Cape Wind had proposed in Massachusetts. Simplicity is key, says Grybowski. “If you try to start with one large project, à la Cape Wind, a lot of things can go wrong,” he says. “When you scale it down, it’s less scary for everyone.” 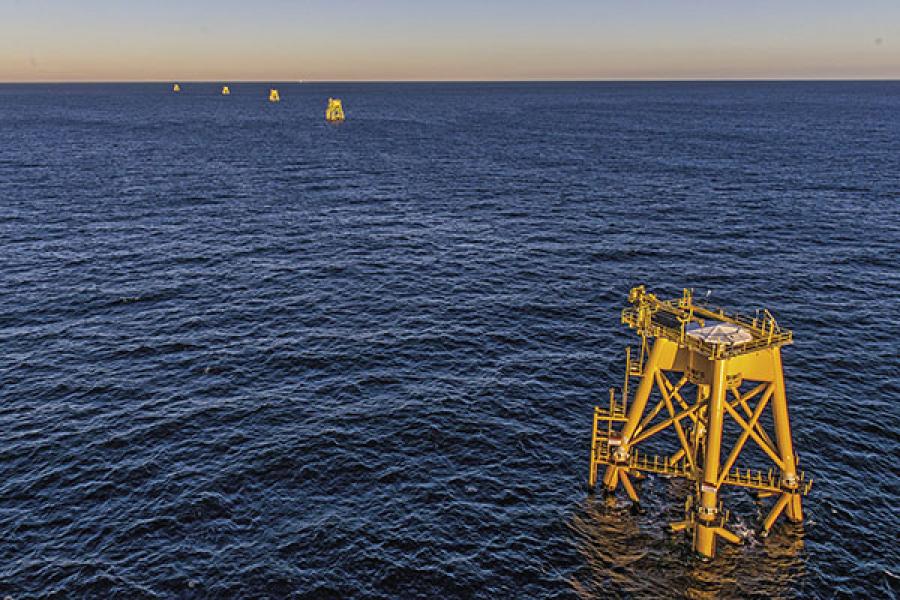 In a backward twist of luck, Deepwater Wind got to negotiate its payment plan with National Grid after it had already won the bid round for the Block Island project. That made it easier to score a sweetheart deal. The contract raised eyebrows. The Public Utilities Commission (PUC) rejected it in 2009 for not being “commercially reasonable”. Undaunted, Governor Carcieri and the General Assembly passed a statute that instructed the commission to take a second look and stop considering whether the project made economic sense for Rhode Island. It passed, 2–1. Rhode Island Attorney General Patrick C Lynch was stunned. He called it an “inside deal” that would force ratepayers “to buy grossly overpriced electricity for the next 20 years to specifically guarantee one company’s revenues and profits”. Lynch and several other ratepayers appealed the PUC’s decision to the Rhode Island Supreme Court. In 2014, the court begrudgingly affirmed the deal, writing that they hoped it turned out to be as good for Rhode Island as Seward’s Folly was for Alaska.

Unsurprisingly, Deepwater Wind argues that it is doing Rhode Island a favour. All the power on Block Island comes from generators powered by 1 million gallons of diesel fuel a year, ferried over from the mainland. Its 1,100 utility customers have been paying about 50 cents per kwh in recent years, about half of that tied directly to diesel prices. Block Island will soon be able to mothball those diesel generators, but not because the quaint island is going 100 percent wind power. Some of the wind power will flow to the mainland over the new $107 million subsea cable that ratepayers are footing. In return, Block Island will be able to draw power from the mainland whenever the wind dies down.

The islanders’ new price for power will be on the order of 30 cents per kwh. They will save about $2 million a year on power, displace a million gallons of diesel and eliminate about 40,000 tonnes a year of carbon emissions. Extremely modest benefits, given the roughly $900 million in costs. 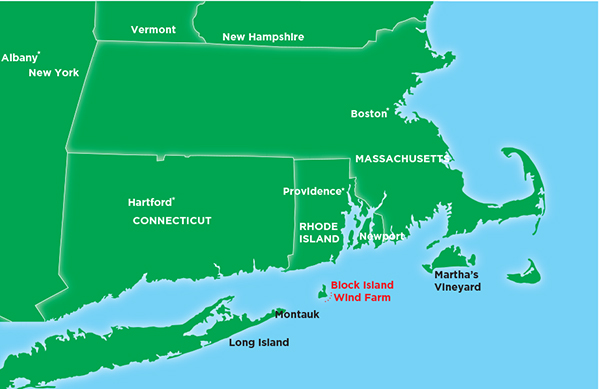 First of thousands? The windmill foundations were made in Louisiana oil rig yards

Another thing this project won’t do much of is create jobs for Rhode Island. Sure, a few dozen labourers from Rhode Island’s unions are working to install the turbines and cables, but manufacturing the pieces is an international effort. The steel bases were built in Louisiana. The towers are coming from Spain. The 240-foot-long blades from Denmark. The nacelles, which hold the gears and engines, from France. The cable from South Korea. General Electric hopes this is just the beginning. It has long been in the onshore wind business, but entered the offshore last year via its $11 billion acquisition of French power giant Alstom’s power-and-grid business. “It is the beginning of a new market,” says Jerome Pecresse, CEO of GE Renewable Energy. “It can prove that offshore wind can be done.”

For an encore, Deepwater Wind is pushing its Deepwater One Project, which would install hundreds of turbines in federal waters about 15 miles east of Block Island. Grybowski submitted a $1 billion plan to the Long Island Power Authority (LIPA) whereby the power from 35 turbines would be transmitted over a 30-mile-long subsea cable to Montauk Point, on the tip of Long Island. LIPA rejected it, so last December, Deepwater came back with a more modest concept for 15 turbines plus two GE-engineered battery storage facilities. Bryan Martin, head of DE Shaw’s US private equity, is confident. “There is a replacement cycle going on for power assets in North America,” he says. “And in the constrained space of the Northeast, offshore wind can be cost competitive with natural gas generation.” Don’t discount its green cred, either. New York Governor Andrew Cuomo says he wants the state to go 50 percent green, while New York City Mayor Bill de Blasio dreams of having city government run entirely on renewables. Deepwater Wind has been looking at leasing a turbine staging area at the city’s unused South Brooklyn Marine Terminal. New York City should be a great score, says Grybowski: “High energy prices, densely populated, impossible to build anything new.” In other words, another island full of suckers.