This Chinese city is the Mecca of hardware startups

For startups at a Shenzhen accelerator, a month's R&D takes only a week 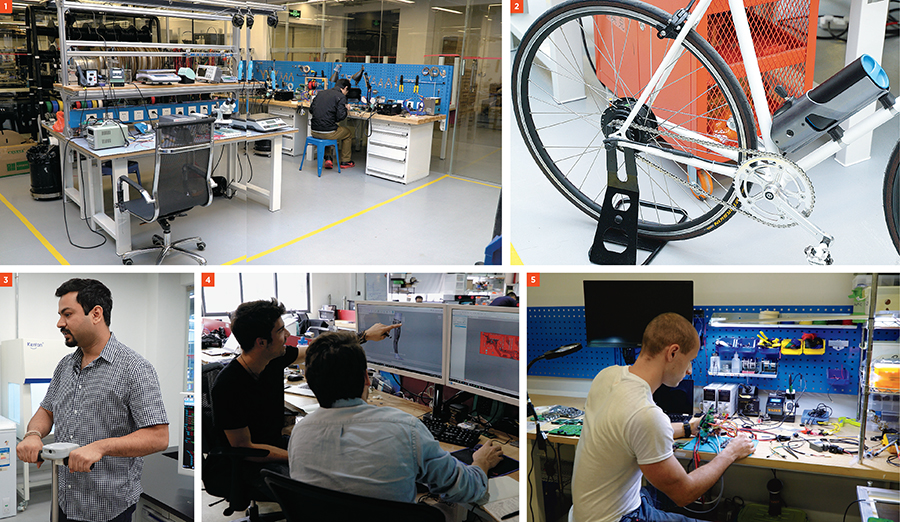 1. HAX workspace in Shenzhen: “The teams come here for three months. They get about a year’s worth of R&D done,” says Duncan Turner, managing director of HAX

5. New York’s Wazer has developed a $6,000 desktop waterjet cutter that can slice through any material, according to co-founder and CTO Matt Nowicki

To describe the Huaqiangbei electronic market in the southern Chinese city of Shenzhen as a boomtown for computer components is a gross understatement. Venturing through crowded stalls piled with an array of microchips, circuit boards, LED lights and wireless chargers, all while flying drones and hoverboards buzz about, you think you’ve seen it all. But you’ve barely scratched the surface—or the bottom, in this case.

Perched eight floors above the bustling makers’ paradise is HAX, a hardware accelerator. The moment you step into the elevator that leads to the shipping-container-stylised entryway of HAX, the background chatter goes from colloquial Mandarin to English spoken in various accents.

Spread across 42,000 square feet, the open-floor-plan layout is built for creativity. It’s equipped with your standard co-working fixtures—telephone booths for private calls, meeting rooms covered in whiteboard drawings, a Ping-Pong table in the kitchen and an amphitheatre for demo days. In addition, there’s an entire level of prototyping rooms with assorted industrial testing equipment, a fabrication facility and even a biolab for agricultural and medical research.

“A lot of the companies find us because of Shenzhen. Most hardware companies know they need to come to Shenzhen as part of their evolution into a full-fledged company,” says Duncan Turner, managing director of HAX, who has led the programme since its inception. The mentorship-driven seed-funding platform has worked with some 150 teams building “cool stuff in consumer technology, health care, enterprise IoT [internet of things], or industrial robotics and manufacturing technologies”.

Startup teams come from all over the world. Over half come from North America, a quarter from China and the rest from Europe. “You can prototype anywhere, but it takes a long time. Ninety percent of electronic ­components originate in Shenzhen,” adds Turner, who spent years ­shuttling between London and Xiamen before his time with HAX.

As the former lead of product design and engineering at IDEO Shanghai, Turner knows firsthand that “you can get Western components, but you find that when you manufacture, everything changes. So you have to re-engineer, redesign”. The 30-member staff at the hardware incubator range from mechanical, electrical and robotics engineers to industrial and graphic designers. All of them are at the beck and call of each cohort.

HAX is one of six accelerator programmes run by SOSV (the others are in Shanghai, Taipei, San Francisco, Cork, Ireland and New York), a venture capital firm headquartered in Princeton, New Jersey. Induction into the coveted programme comes with $100,000 in initial seed funding in exchange for a 10 percent equity in the startup. Teams that show potential have the opportunity to receive follow-up investment from its growth scaling fund. “We use the programme to do our due diligence,” says Turner, who is also a general partner with SOSV in charge of deploying capital. He often bases his assessment on the working relationship he has with the entrepreneurs. “It’s far better than any due diligence you’d do as a typical investor coming in at Series A.” To date, SOSV has invested in nearly 700 startups.

Although there’s a proliferation of similar curriculums offering support to startups in the Pearl River Delta region—AIRmaker, Shenzhen Valley Ventures, Seeed Studio, Brinc, Techcode, Highway1, Blueprint, to name just a few—HAX was the first to leverage its position in Shenzhen to build hardware in 2012. Corporate accelerators have also been cropping up in an attempt to stay ahead of “disruptive” technologies.

Induction into the HAX programme comes with an initial funding of $100,000

Across China there are around 3,000 incubators in operation, estimates professor Andreas Schotter of the Ivey Business School in London, Ontario, in Canada. That number is expected to exceed 5,000 by 2020, many of which will be government-backed. “This is not surprising given there is a lot of free money from the initial industrialisation waves that seek a place to grow,” says Schotter. He considers government support especially pronounced in innovations that help address serious Chinese problems like energy or water and food safety.

Although pockets of technology development exist across the mainland, Shenzhen’s position was solidified in 1980 when the city was designated as one of China’s first Special Economic Zones. The metropolis welcomed foreign direct investment and attracted prestigious homegrown high-tech companies such as Tencent, Huawei, ZTE, Coolpad, DJI and BYD.

In 2016 Shenzhen’s GDP surpassed $300 billion. Its economic output rivaled leading midsize provinces and surpassed countries such as Portugal and Greece—putting it on par with developed nations like Australia and Germany.

Turner maintains that Shenzhen is the optimal place to develop hardware, both in terms of speed to market and efficiency working the supply chain. One tried and true fact he firmly stands behind: A week in Shenzhen is like a month anywhere else. “The teams come here for three months. They get about a year’s worth of R&D done.”