Asia-Pac companies yet to up AI game

Only 7 percent of APAC companies are prepared to take advantage of emerging technologies, says Microsoft-IDC study 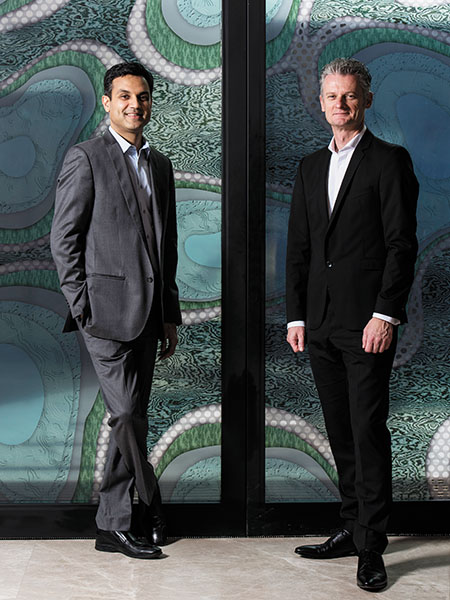 Microsoft’s Anant Maheshwari (left) and Ralph Haupter say companies are thinking of taking advantage of digital changes, which will impact 60 percent of products and services by 2021
Image: Mexy Xavier

Artificial intelligence has been propelling technology-led changes in modern times like no other, but only a small proportion of companies in the Asia-Pacific region are prepared to take advantage of the emerging technologies to overhaul their enterprises. Microsoft Corp and market researcher IDC recently put together a study by surveying 1,560 companies, categorising them as either ‘leaders’ or ‘followers’.

According to the study, there are several differences that separate the leaders from followers. “First, people leading the transformation have a strategy defined within the board; two, in many cases, they have an owner on the board, and, three, they have dedicated budgets—for products, first wins or some first reference cases,” Ralph Haupter, a vice president at Microsoft and president, Microsoft Asia, tells Forbes India. “Leaders also communicate what their digital transformation agenda is.”

The study identifies five ways that companies can benefit from digital transformation, Haupter says. Four of them are traditional metrics—higher productivity, lower costs, higher revenues and wider profit margins.The fifth, ‘customer advocacy’, a child of the internet-era social media, is jargon for categorising customers into those who hold a negative view of a company’s products and services and those who are strong advocates.

This is where most ‘followers’ are coming up short. They lack digital strategies that include ways of effectively listening to naysayers and turning them into converts. As the Microsoft-IDC study bears out, such companies are in short supply in the Asia-Pacific region.

“If you take these [five] criteria, then only 7 percent of the respondents fall into the bucket of leaders and the rest are in the camp of followers. They have a lot of work to do,” says Haupter. 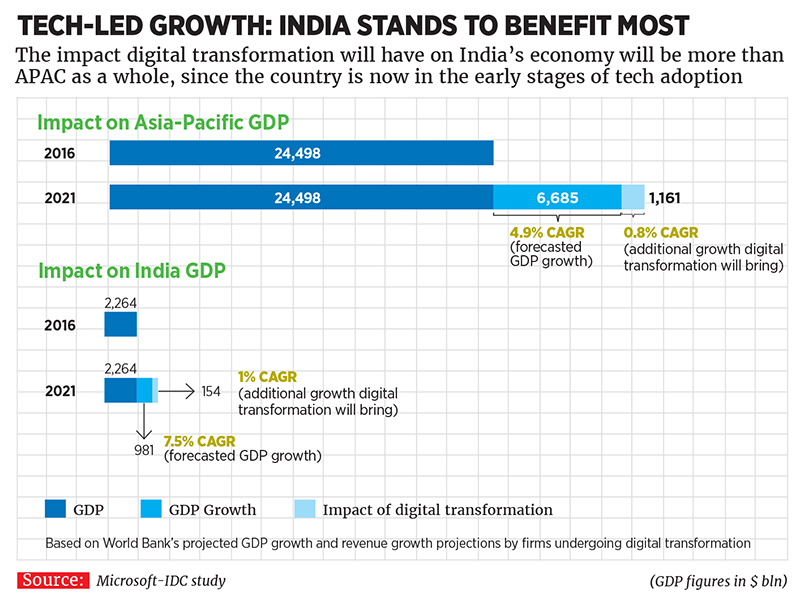 India noses ahead
A second big theme the study looks at is the impact of digital transformation on Asia-Pacific economies. It projects that, by 2021, Asia-Pacific’s GDP growth will get an additional 0.8 percent CAGR (compounded annual growth rate) boost specifically due to products and services enabled by digital technologies. That would equal $1.16 trillion, says the study (See chart).

The India nuance is that the impact on GDP growth here is among the highest in the 15 markets surveyed, because of the digital transformation initiatives taking place in the country, says Anant Maheshwari, president of Microsoft India. India’s GDP can growth at an additional 1 percent CAGR, by 2021, with digital transformation.

That said, India is among the economies that can get a bigger fillip in GDP growth because it is currently in the early stages of digital change. The country’s late start also gives it an opportunity to leapfrog to the newest and most promising technology. “This is playing out in businesses today,” adds Maheshwari. 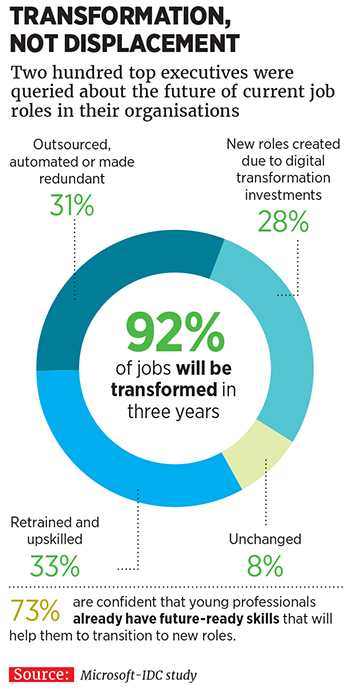 The focus, therefore, is switching towards how to take advantage of these changes, Haupter and Maheshwari point out. Their meeting with Forbes India, at Microsoft’s Mumbai office, was immediately after multiple customer meetings. And one of the customers, Haupter says, is a large consumer products company looking to completely digitise products, including air and water purifiers, using sensors, a consumer-facing app etc.

Maheshwari adds: “Digital transformation has become mainstream.” He recalls how in February, at a conference organised by India’s software lobby Nasscom, “a number of industrial companies talked about IoT, customer service, predictive maintenance, how data should flow back to products, productivity in supply chain etc”. “It’s very normal. This isn’t innovation any longer.”

The innovation will be in “how do I get this done, there are so many things to do, and what needs to be prioritised”. Where do CEOs find the resources and who are the right partners—these are the questions they are grappling with. In the Indian context, there is also the factor of having much fewer practitioners of this data-driven art than in the advanced economies, which is an important challenge.

Other obstacles include the need for massive re-skilling, the entrenched cultures of traditional organisations where silos exist, and the resultant resistance to change because it requires people to deliberately step out of their comfort zones.

Says Maheshwari: “This isn’t a one-time project, but a continuous piece of work, so the CEO agenda is different today.”