Tomorrowland: Singapore's Keppel is building the cities of the future

If smart cities are the future of cities, Keppel is signing up 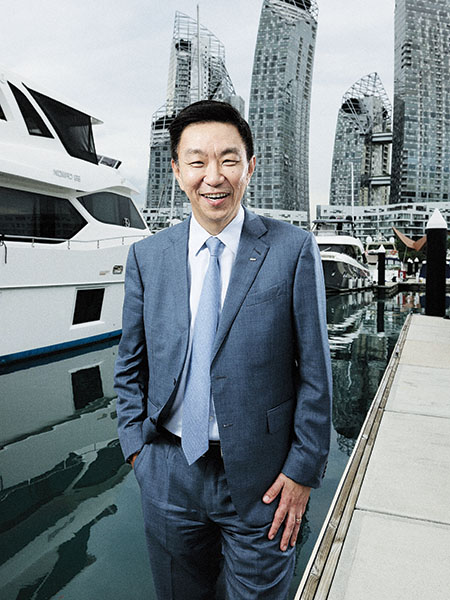 Engineering and construction heavyweight Keppel Corp is celebrating its golden anniversary with the slogan “Fifty years: Shaping the future”, and it boasts 21,000 employees in 24 countries focussed on that task. But it’s a new Keppel unit with just 10 employees that may end up shaping an outsized portion of that future.

Keppel formed the unit, Keppel Urban Solutions, last November to help pitch its experience as a master developer and to harness its range of skills. Started as a local shipyard, the Singapore conglomerate now positions itself as an international player in building the “smart” cities of the future in Asia and elsewhere. “Urbanisation is a mega-trend,” says chief executive Loh Chin Hua, breaking into a confident smile at the company’s sky-high headquarters in Keppel Bay Tower overlooking the Singapore Straits. He ticks off Keppel’s strengths in four sectors—energy, property, infrastructure and asset management—all essential to its city-building vision. “The opportunity is vast.”

The unit’s inaugural project is Saigon Sports City, which is designed to accommodate 17,000 residents by 2025. It’s eyeing foreign investors and Vietnam’s growing middle class for apartment sales. Bulldozers are now flattening a 64-hectare site in district 2 of Ho Chi Minh City, and groundbreaking is set for late this year. “We will design, build, stitch it all together—and stay on to own and operate it,” says Loh, a former executive of GIC, Singapore’s sovereign wealth fund. That marks a shift in strategy for Keppel—formerly it would sell its projects once they were done. Now it will keep them, generating recurring income, a plus for investors.

This city-within-a-city in Vietnam is being built in the shape of the auspicious number eight. In one pod there’ll be residential towers and international schools; the other includes a stadium, recreation facilities, shops, restaurants and offices. Keppel expects to complete phase one in 2021. What will make it a smart city? Residents will be able to use a smartphone app to control home-security settings, appliances, lighting and the temperature as well as to monitor how quickly their electric cars are being charged or to pinpoint vacant parking spaces. Technology outfits will be encouraged to use the project’s cloud-based platform to develop additional apps. Meanwhile, Keppel will collect copious amounts of data it can use to improve services, make buildings more energy-efficient and gain insights into the consumer behaviour of its residents that will help its commercial tenants.

This year Keppel ranks No 1,634 on Forbes Asia’s Global 2000 list. The stock is up by 58 percent since early 2016, boosting its market capitalisation to $10 billion. This year’s revenue is expected to come in at $4.9 billion, 13 percent higher than 2017’s, according to an average of analysts’ estimates compiled by Bloomberg. Net profit is seen jumping from $157 million last year to $788 million in 2018, buoyed by strong property sales. It was welcome news after a string of headlines about a corruption scandal in Brazil that hammered profits last year. “What differentiates Keppel is that we want to be involved for the long term,” says Loh, noting that its role as an owner and manager is a plus for commercial tenants and residential owners. “If you are building something, and you know you are going to run it, then you will have a more thoughtful, high-quality design.”

Loh, who turns 57 this month, joined Keppel in 2002 and started a Keppel unit, Alpha Investment Partners, where he served as managing director. He was tapped as Keppel’s chief financial officer in 2012 and stepped up to CEO in 2014.

Keppel’s experience in huge urban projects over the past 20 years fuels Loh’s confidence. In China, for instance, Keppel leads the Singapore consortium that’s helping to build Tianjin Eco-City. Started in 2008, it’s a joint venture of the China and Singapore governments and designed as a model to be replicated across the mainland. (The China consortium comprises several Chinese developers.) Today what was a gargantuan salt pan is now a city of 80,000 on its way to 350,000, with 6,000 companies. Its smart technology includes streetlamps that monitor traffic, flooding, security, noise and air quality; they also charge electric cars and make public announcements. Self-driving cars are on the way. They’re now in the testing stage.

Tianjin Eco-City lost money for its first eight years, but it’s beginning to pay off for Keppel and other investors as residences and land parcels sell for ever higher prices. So far, Keppel Land has sold 4,000 of the 29,000 homes in the new city, with the rest being sold by other developers. It has 12,000 more in the pipeline, but as elsewhere in China, government cooling measures have slowed home sales in Tianjin. Keppel has also built the commercial properties and the heating and cooling plants. The goal is for renewable sources to generate 20 percent of the electricity.

In the city-building industry, Keppel’s main competitors in China are Country Garden, Agile and Evergrande, all mainland developers with large land banks. But according to DBS analyst Danielle Wang in Hong Kong, they now face resistance from the government, which increasingly wants to avoid awarding large plots to a single developer. “The Chinese government wants to be the master planner today,” she says. “The government can charge more if they give smaller pieces of land to different developers.” Nevertheless, Keppel is pursuing more deals in China, as well as in Vietnam and the Philippines, according to Cindy Lim, Keppel Urban Solutions’ managing director.

In Singapore, non-luxury-township master planning is off-limits to private developers. One such non-luxury township will open in November, when Singapore’s Housing Development Board launches Tengah, billing it as a lush “forest town”. As the country’s first new town in more than 20 years, it will have a car-free town centre, self-driving vehicles and 42,000 homes when fully developed over the next two decades.

But large-scale luxury development remains lucrative for Keppel in Singapore, and Lim says she’s looking to pitch more such projects. Keppel Land’s sleek Keppel Bay waterfront development rises like a phoenix on the site of its old shipyard, which ceased operating in 2000. Offices in Keppel Bay Tower form one bookend, while the iconic Reflections, designed by architect Daniel Libeskind, forms the other—six gleaming residential towers majestically bending together. Sandwiched in between is a sprawling stretch of luxury residences that surround a marina full of yachts, coral and fish.

Meanwhile, Keppel works with the Singapore government on major infrastructure projects. After building several plants for cooling, waste and water, Keppel is now building the country’s fourth desalination plant, and it’s expected to open in 2020. Producing up to 30 million gallons of fresh drinking water a day, it will treat both seawater and fresh water, and Keppel will own and operate it for 25 years. The grass-covered plant is surrounded by walking trails, and gushing mini-waterfalls camouflage the machinery.

Loh sees Keppel building floating islands someday. He says waterfront cities with space constraints—such as Singapore, Hong Kong and Tokyo—could float infrastructure or residential developments offshore: “It’s not commercialised; you need some farsighted cities.” He adds that sovereign wealth funds may be well placed to take the investment lead. “If you want super-imagination, you could see a small-scale city built near shore.”

Despite the focus on tech-infused development, Loh, as do other city planners, wants his staff to regularly ask: “How do we create a place where people feel at home?” Social media can help urban dwellers connect and organise events, he says: “If you can achieve that, then you are building a city. For Keppel there will be no shortage of opportunities. If you finish in China, you still have India and Africa. We can be doing this for a few lifetimes.”