Self-driving cars are at least five years away. Eighteen-wheelers are coming first, and a 34-year-old Caltech PhD's unicorn is king of the road 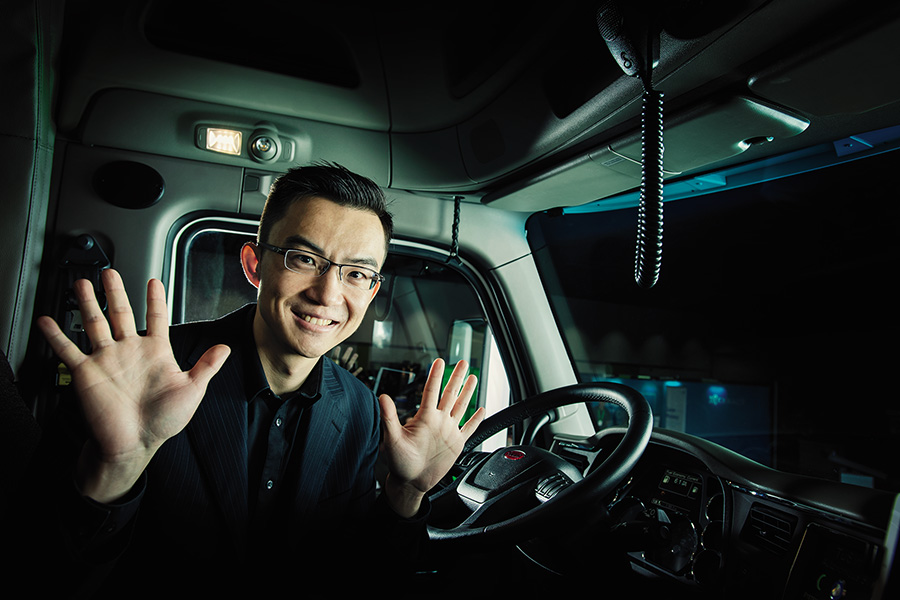 
Southeast of Tucson’s airport, tucked into a patch of Sonoran Desert dotted with cholla cactus and paloverde trees, is a sand-coloured industrial building with a horizontal emerald-green slash over the entry doors. Only when a Peter­bilt semi-truck loaded with cameras and sensors rumbles out does a visitor get any hint of the technological revolution brewing within.

TuSimple co-founder Xiaodi Hou established this depot last year to test the company’s self-driving big rigs on paid runs, the next step in commercialising an autonomous system for the $700 billion trucking market. (The trucks currently operate with a safety driver and an engineer on board; Hou wants to start making runs “driver out” next year.)

TuSimple isn’t the only startup focussed on driverless trucks. Embark Trucks, Ike, Starsky Robotics and Kodiak Robotics, all based in the San Francisco Bay Area, are racing to develop their own autonomous big rigs, but TuSimple is on the fast track. Hou, a 34-year-old computer scientist, has raised $178 million for the San Diego startup at a $1.1 billion valuation, making it the first self-driving trucking unicorn and giving it more than three times the war chest of Embark, its closest startup rival. The cash pile gives it an edge in expanding its fleet, key to inking more deals with clients such as Phoenix-based Royal Paper. With 15 Peterbilts and Navistars, it has more semis transporting goods for paid customers than any competitor, Forbes estimates, and Hou claims a technological rec­ord, too—TuSimple has a proprietary vision system that can see a kilometre ahead, farther than any other driverless tech company, including Waymo.

“Our 1,000-metre perception­—I think this could be the biggest strength of the company so far,” Hou says.

Waymo, a unit of Alphabet, the parent company of Google, launched its autonomous taxi service in Phoenix in December, beating GM Cruise and Uber to market. Last year it also started testing self-driving trucks, using the same suite of sensors and software that successfully pilot its hundreds of minivans.

Along with his vision system, Hou has created software designed exclusively to drive big trucks, not cars, by using deep learning—a cutting-edge field that trains machines to recognise objects and figure out their own responses. He’s convinced it will set TuSimple apart from even Waymo.

If he’s right, TuSimple will be early to profit from the autonomous-driving boom. Dozens of tech giants, startups and global auto players are jostling to catch up to Waymo. But most self-driving car programs are still experiments, at least five years out from being sustainable businesses.
Autonomous trucking looks like it could become a commercial success earlier, propelled by a driver shortage that the American Trucking Associations puts at 60,000 a year for semi drivers. TuSimple also hopes to benefit from the relatively easier challenge of navigating interstates rather than crowded city streets. The plan is to have self-driving trucks haul goods long-distance between depots on the outskirts of big metros, and then transfer the cargo to smaller, manned trucks for local delivery.

A native of Beijing, Hou earned degrees in computer science and engineering from Shanghai Jiao Tong University in 2008, then made his way to Pasadena, California, for doctoral studies at the California Institute of Technology, deciding that Caltech—home to Nasa’s Jet Propulsion Laboratory—was a better fit than grad schools in the Bay Area. “I wanted to live deliberately,” he says, quoting Henry David Thoreau’s Walden. “I didn’t want to be harassed by a lot of so-called opportunities around me.”

During his six years at Caltech, he studied how the brain processes visual information—including an unpleasant stint in the neuroscience department’s monkey lab. He also explored artificial intelligence developed with the use of deep learning, a field so little understood that he says it was “like alchemy. People didn’t know what to do with it”.

By 2015, one thing he thought it could do: Help create a driverless system faster than was possible when Google began its self-driving research in 2009. Rather than rely on thousands of lines of code for specific features, deep learning teaches computers to recognise patterns from images, mimicking human brains. (Waymo has since become a heavy user of deep learning.)

And while he respected Google’s progress, Hou was convinced that complex city environments were too tough for robo-cars. Highways are another matter. For cars, the artificial intelligence “is not there, and it’s not going to be there until we have a revolution as big as deep learning,” he says, estimating that will take another five years.

Bernd Heid, a senior partner at McKinsey & Company, agrees trucking faces a smoother ride. “Highway is a very easy application, or relatively easy, because it’s controlled. It can be easily mapped,” he says. “You do not have kids playing around.”

Hou envisioned TuSimple while still at Caltech, founding it in 2015 with his friend and business partner Mo Chen, who is CEO, while Hou opted for the CTO and president titles. Chen is based in China, where TuSimple has a second headquarters and is developing robot trucks to carry cargo at local ports. “Xiaodi’s role is to build the technology, because that is our future. My role as the CEO is to support him,” Chen says.

TuSimple closed a $95 million round in late 2018, led by Chinese tech firm Sina Corp, its earliest backer, with investment from Hong Kong-based Composite Capital Management. US backers include Nvidia, which supplies TuSimple’s computing system. Revenue from runs, mainly within Arizona and starting last summer, brought in less than $100,000 last year. As the company expands its fleet to 50 in June, revenue from paid runs should rise to $1 million a month in the second half of 2019, chief product officer Chuck Price says. Individual states’ restrictions on self-driving vehicles prevent TuSimple from taking autonomous commercial loads coast to coast; for now its self-driving is limited to states like Arizona and Texas. There’s also the worry another fatality could complicate its plans: After an Uber self-driving test car hit and killed a pedestrian in Arizona a year ago, the ride-hailing company’s program was stalled for months.

To customise its fleet, TuSimple collaborates with heavyweights, including Peterbilt and Navistar, as well as truck engine maker Cummins. In the next few months, TuSimple says, it’s launching a paid pilot program with a large US agency to make 1,000-mile runs autonomously.

Cash flow from these runs helps offset the estimated $200,000 expense of robotic trucks: About $150,000 for the vehicle itself and the rest for its nine cameras, two lidars (laser sensors for 3-D imaging), forward radar and onboard computer. There’s also the cost of TuSimple’s constant road tests, which for now include salaries for a safety driver and an engineer in the cab. TuSimple thinks it will have a compelling pitch to customers: You’ll make back the added expense in two years.

Like Waymo, TuSimple uses lidar and radar, but it predicts long-range cameras will be the best option for trucks. Its one-kilometre vision system is key to that, and also a selling point for future customers. By being able to see as far as a kilometre ahead, TuSimple maintains, it can cut fuel costs by up to 15 percent a year by better regulating speed and lane position to avoid rough braking.

Market demand and basic economics could trump jitters about putting 40-tonne driverless trucks on the road. In Tucson, just off US Interstate 10, the vital cargo corridor that links the port of Los Angeles to the Southwest and ultimately Florida, Hou sees success ahead: “It is going to happen in trucking.”

Tweets by @forbes_india
What's spooking auditors?
Thoughts on the future