Wall Street's hottest new stock isn't that of a social network or ride-hailing platform, but a video app that wins by just working better 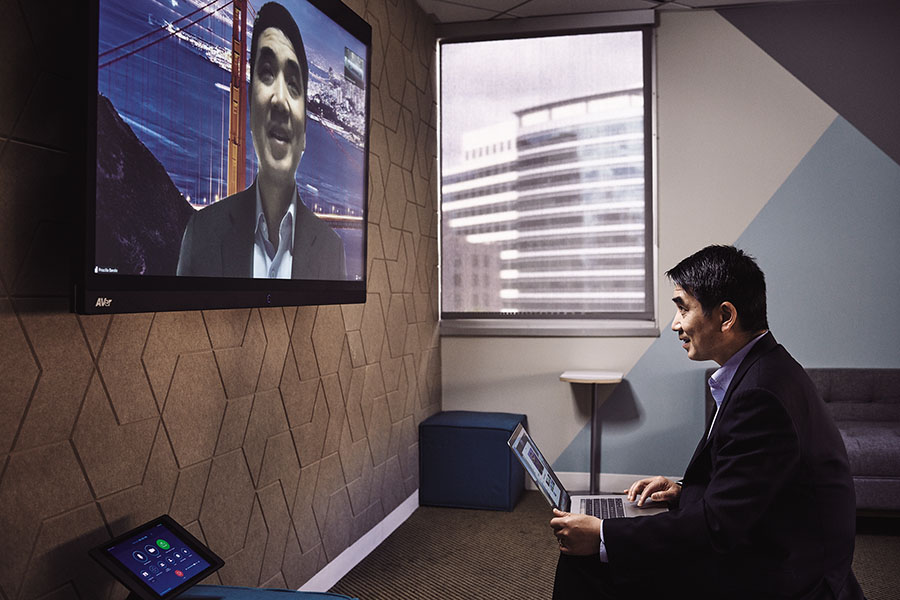 Founder Eric Yuan hopes that decades from now, employees will remember Zoom as a great place to work: “If they feel that way, I’ll feel like my dream came true.”
Image: Ethan Pines for Forbes 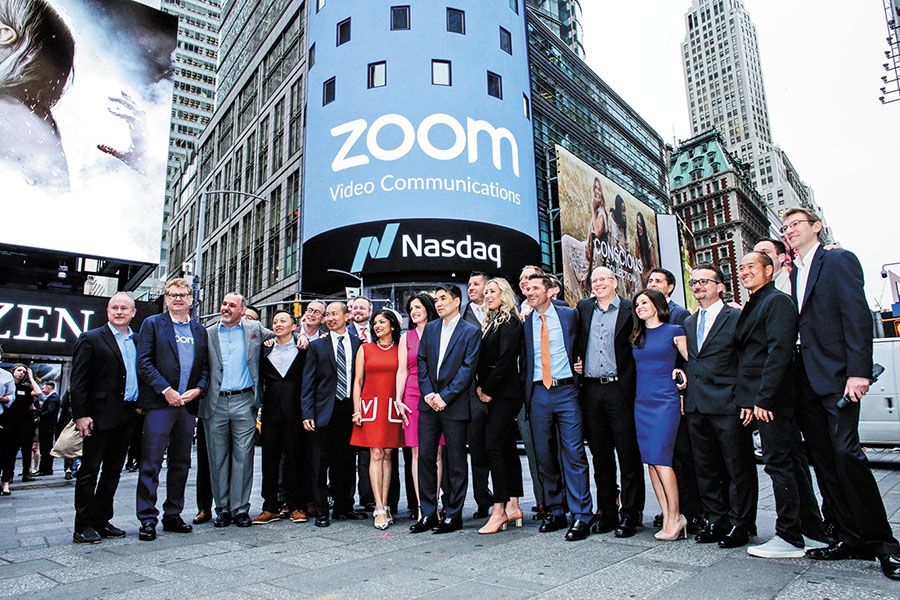 Zoom management waves at employees tuning into Times Square on the morning of its April IPO
Image: Kena Betancur/Getty Images

A revitalised Cisco—as well as Google, Microsoft and even potentially Apple and Amazon—threatens Zoom just as it did in its early days. While Zoom has claimed to work with at least 90 of the Cloud 100—Forbes’ exclusive ranking of the top private cloud companies—some corporations, like Sony, have resisted the move to Zoom as too complicated to set up at large scale. At GM and Verizon, for instance, teams use multiple solutions that don’t include Zoom. Others, like Ford, use Zoom, but only for a handful of people. Even at Qualcomm, which owns a piece of the company, you’ll find Cisco and Microsoft. “People just have a solution they already pay for,” Qualcomm Ventures’ Li says. As Zoom adds features and larger accounts, with some companies simultaneously hosting thousands of people across multiple chats, the company will need to be careful not to cut corners and damage the product. In January, Zoom suffered a high-profile service outage, which it blamed on Amazon Web Services, but all people saw was that Zoom’s app didn’t work. “It’s like a restaurant,” Yuan says about a similar glitch with a third-party vendor. “When a customer walks into a restaurant, until they leave, the entire experience needs to be great. You can’t blame anything on anyone else.” But, of course, it can cut both ways. When Facebook went down in March, the New Zealand House of Representatives streamed its committee meetings over Zoom instead of Facebook Live. And in its regulatory filing with the SEC before going public, Zoom noted that more than half the 500 largest companies in America had at least one paid seat on Zoom but few had signed large contracts, suggesting an avenue for significant sales down the road. Then there’s the international market, where Zoom did just 18 percent of its business in its last fiscal. Expansion into markets with the most demand for Zoom—the UK, Japan, France, Germany and Australia—presents a ­natural future angle of attack. Zoom is furthest along in Canada and is studying it for its next phase of growth. And after Yuan, ever thrifty, spurned the chance to buy the Zoom.com address in the company’s early days, opting for the cheaper Zoom.us, Zoom quietly acquired it last year for $2 million, a domain that could prove valuable in disassociating the company from the US in touchy overseas ­markets. China remains a wild card. Zoom has more than 500 engineers there, rare for a US company. But China is an unproven market for the enterprise business, Yuan says. Still, its employee foothold in the country and Yuan’s personal connections could help Zoom make the jump. If Zoom hopes to become as big as Cisco someday—the San Jose company booked $49 billion in sales last fiscal, and its stock is trading near a 20-year high, generating a market capitalisation of about $250 billion—it will likely need to offer far more than video. One likely area for a bigger push is data. Zoom already connects customers to other services to record and transcribe its conference calls and help sales reps flag patterns of interaction that might suggest a deal is close, from an ideal time to chat or the duration of a call. Similar tools could help marketers, product developers and customer service reps learn from their Zoom meetings in future, too. And Zoom has powerful friends for that push. Atlassian and Salesforce are two enterprise software leaders that have invested directly, and others, like LinkedIn, have made Zoom a preferred partner. In the meantime, don’t expect Yuan to let his newfound billionaire status go to his head. He may drive a Tesla, but only because he sees the company as a lot like Zoom—it’s designed differently and it’s faster under the hood (plus Tesla is a customer, too). Back in his cubicle the Monday after the IPO, he’ll keep trawling the Zoom Twitter account for customer testimonials to retweet. And he’ll expect employees, who turned out around the world for the IPO ceremony to wave to their boss over a live feed in Times Square using—what else?—Zoom to follow his lead. A mentor once told Yuan the IPO would be like graduating from high school. “You go celebrate one day, and that’s it,” Yuan says. “You don’t want high school to be the peak of your performance, right?”