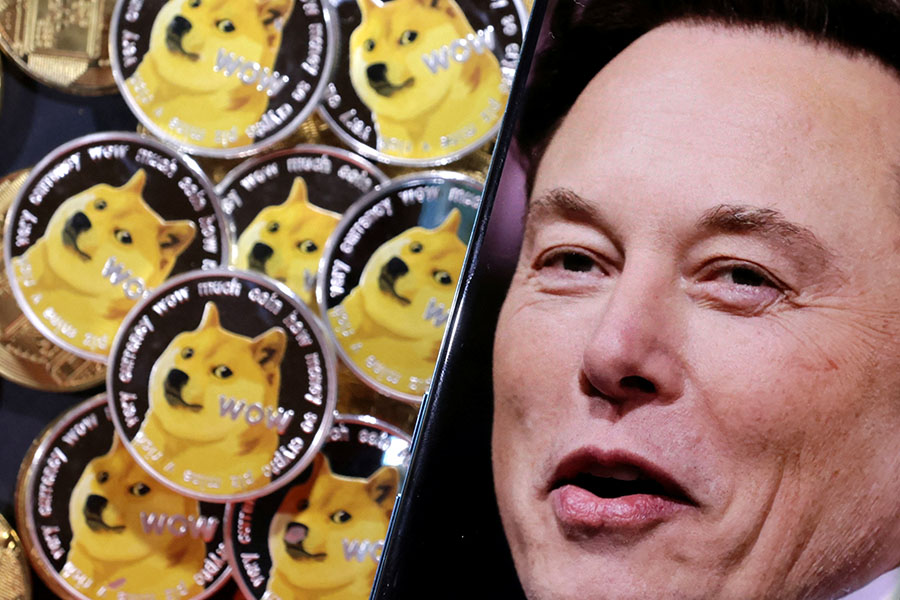 Thanks to Elon Musk, Dogecoin has been rising in the past week. The Tesla CEO's recent acquisition of Twitter has generated excitement around the meme-based crypto asset. Dogecoin had been stable in the months leading up to Musk's takeover but has seen a surge in activity and price since then, DOGE prices soared 98.5 percent in the past week after Tesla CEO Elon Musk bought the crypto.There's been a lot of speculation that Twitter may start accepting DOGE as a payment method, which could explain the recent price hike. As the prices increased recently, several holders are reportedly in profit. According to the data from Intotheblock, 62 percent of the DOGE holders are in profit from where they initially purchased the token. A whopping 62 percent of DOGE holders are in the green, according to IntoTheBlock, which is even better than BTC and ETH holders at 54 percent and 57 percent, respectively.Dogecoin (DOGE) has surged in the last seven days, outperforming other top crypto assets. This may be a new start for the bull. After a rough start to the month, the meme coin came back, rising to $0.1494 at its peak. It showed promise over the last seven days, giving holders hope for the future.DOGE investors were delighted when Musk announced his purchase of Twitter, as many hoped he would integrate Dogecoin onto the platform in some capacity in future. It's no surprise that the link between Musk and Doge's price surge exists, as investors see Musk as a big driving force for the coin.According to Cardano CEO and founder Charles Hoskinson, Dogecoin could be coming to Twitter soon. In a recent interview, Hoskinson said there is a “real possibility” of Dogecoin integrating with Twitter. This would be a big move for crypto assets, which have recently gained popularity. Hoskinson went one step further by offering to migrate Dogecoin onto Cardano as a sidechain. This would give Dogecoin access to Cardano's smart contract functionality for free. In January 2022, Tesla began accepting DOGE as a payment method for merchandise purchases, with Musk also hinting that SpaceX would follow suit in May 2022. The electric vehicle company began accepting Bitcoin-based car payments in January 2021. This is despite the CEO's view that Dogecoin is “better suited for transactions” in December 2021.Shashank is founder at yMedia. He ventured into crypto in 2013 and is an ETH maximalist.

Tweets by @forbesindia
FTX CEO gives his thoughts on Mark Zuckerberg's intent to pump $10B/year into Meta
Deconstructing ancient worlds to build our own: The case of education