Urticaria & its effects on Health

Dr. Sachin Varma busts various facts related to urticaria as well as the relationship between urticaria & food & its effects on health 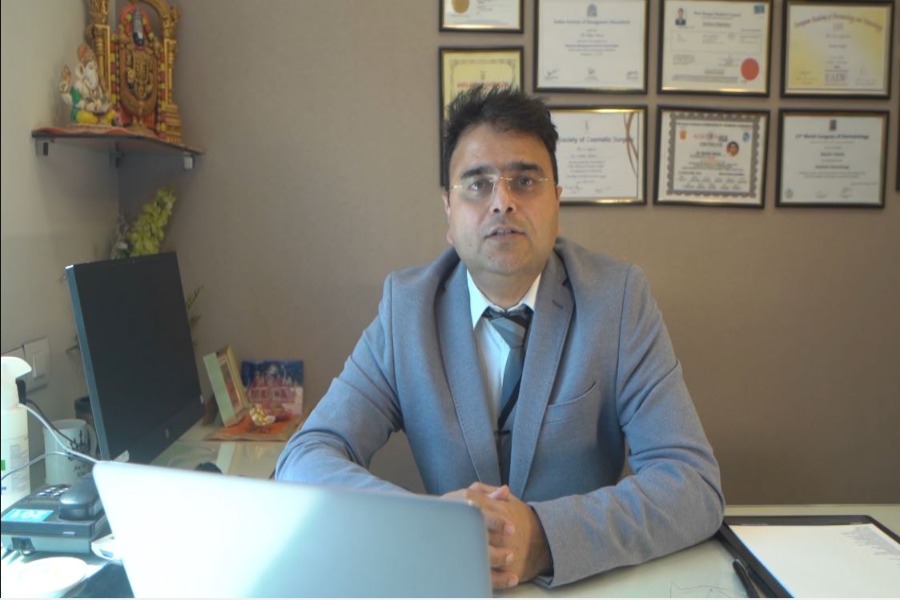 1.  What is Urticaria?
Urticaria, also referred to hives or nettle rash consists of blancheable, erythematous, oedematous papules or ‘weal.’ The weal differs in size from 1 mm to many centimetres- “giant urticaria,” and is usually intensely itchy. They are caused by vasoactive mediators, predominantly histamine, released from mast cells. Usually, the weals are transient, lasting for only a few hours in any one place, but with new weals appearing in other places. It is a common condition-it is estimated that lifetime incidence of urticaria is approximately 15%, with females being affected more than the males. Both children and adults may develop urticaria, with the peak age of onset in adults being between 20 and 40 years. It is defined as ‘acute’ if it lasts for less than 6 weeks and ‘chronic’ if it lasts for more than 6 weeks. Episodic urticaria which occurs intermittently, but recurrently over months or years is also identified. 2. How to differentiate between urticaria and dermatitis?  Alterations in the skin can give the astute clinician insight into the inner workings of the immune system which may otherwise remain invisible. Which atopic dermatitis and allergic urticaria are common in occurrence, they may also serve to be the presenting sign of an uncommon underlying disease. Atopic dermatitis is a chronic condition characterized by pruritic skin lesions related to epithelial barrier dysfunction with immunologic involvement. The lesions can affect the scalp, face and extensor surfaces in infants, whereas the flexor surfaces become more commonly affected in older children and adults. IgE and peripheral eosinophilia frequently accompany atopic dermatitis. The loss of skin epithelial barrier integrity is a key concept in understanding the structural defects leading to atopic dermatitis. Hence, usually severe, or otherwise atypical presentation of atopic dermatitis or allergic urticaria may lead to clinical suspicion of an underlying immunodeficiency.   Issued in Public Interest by Oaknet Healthcare 3. What is the association between food allergy and urticaria?   It has been suggested that natural salicylates in foods and food additives including colourings (azo and non-azo dyes), preservatives (sulphites, nitrates and nitrites), anti-oxidants [butylated hydroxyanisole (BHA) and butylated hydroxytoluene (BHT) and aspartame (an artificial sweetener), may cause urticaria., especially in people who develop acute allergic symptoms after taking aspirin (acetylsalicylic acid) or non-steroidal anti-inflammatory drugs; however, randomized controlled trials are lacking. Skin prick testing and SIgE tests to the food are negative, as the reaction is not IgE-mediated. In some patients, foods such as egg white, shellfish and strawberries seem to trigger direct histamine release from mast cells and episodes of urticaria are related to ingestion of these foods. Again, skin prick testing and SIgE tests to the foods are negative, as the reaction is not IgE-mediated. An unusual, but well-identified non-IgE mediated, food related cause of urticaria is histamine poisoning, which occurs if food containing a very high content of histamine is eaten. The best-known example is ‘scombroid poisoning’ which is due to ingestion of scombroid fish such as tuna, mackerel and swordfish, which ahs not been stored properly and in which bacteria have decarboxylated histidine to produce histamine. Symptoms usually begin within 1 h of ingestion of the fish and patients develop urticaria and gastrointestinal symptoms. In severe cases there may be bronchospasm and hypotension. 4. What physical factors can cause urticaria?  Physical factors such as cold, heat, sweating, exercise; pressure, sunlight, water and vibration may all trigger urticarial reactions. The weals of physical urticaria tend to be short-lived (less than an hour), apart from those of delayed pressure urticaria, which develop over a few hours and may take up to 2 days to disappear. International standards for diagnosing physical urticarias have also been given. Cold urticaria is usually idiopathic, but it may occur in patients with cold-dependent antibodies. Patients develop itching, erythema and urticaria affecting that part of the body which has been exposed to cold. Symptoms may worsen as the exposed area is warmed. Total immersion in cold water can cause severe symptoms with hypotension and patients should be warned that swimming in cold water can eb dangerous. In some patients, pressure on the skin may cause histamine release and a weal and flare response (dermographism). There may also be a delayed response to pressure, with urticaria and/or angioedema developing several hours after a pressure stimulus. Solar urticaria is a rare disorder in which urticaria develops on areas of the body which are exposed to sunlight. Very rarely patients may develop ‘aquagenic’ urticaria where their skin ahs been in contact with water. 5. What patient education tips would you suggest for Urticaria? When a patient has urticaria, he/she must visit the doctor. The dermatologist can often make the diagnosis by looking at the skin. There are three main tests conducted to diagnose urticaria and its causes. For mild to moderate cases, the patient is given a non-sedating antihistamine which relieve symptoms like itching. For chronic conditions also, antihistamines are prescribed. Medicines which may be prescribed to a patient suffering with urticaria are: The pages slugged ‘Brand Connect’ are equivalent to advertisements and are not written and produced by Forbes India journalists.