The saffron party anticipates its best result in the state, Trinamool manages a lead 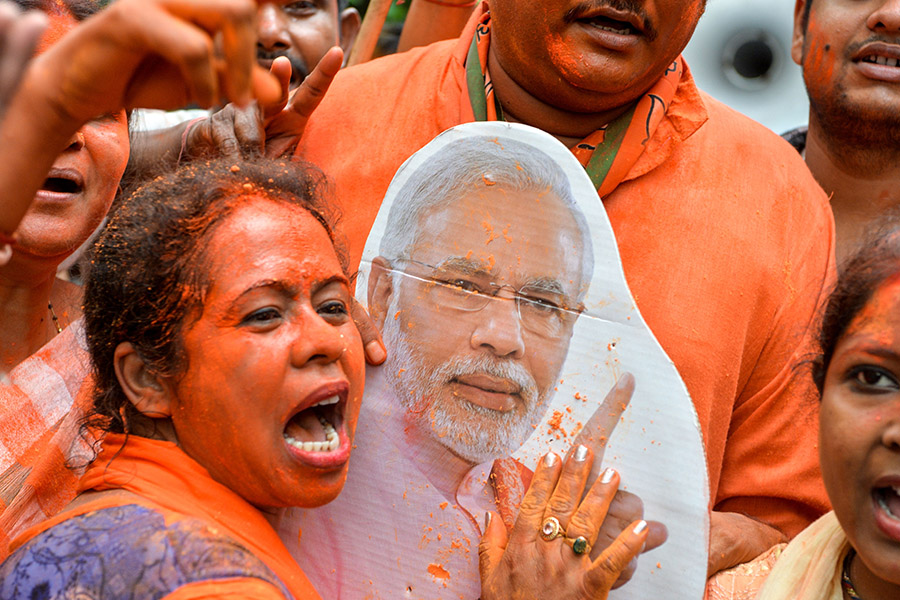 An Indian supporter of Bharatiya Janata Party (BJP) shouts slogans and a cut-out of Indian Prime Minister Narendra Modi as she celebrates on the vote results day for India's general election in Siliguri on May 23, 2019.
Image: Diptendu Dutta / AFP/ Getty Images

As counting trends indicate that the Bharatiya Janata Party (BJP) has earned a credible presence in West Bengal, Chief Minister Mamata Banerjee's claims of a whitewash have gone for a toss. The state has 42 Lok Sabha seats and Banerjee had confidently claimed ahead of the polls that her party, Trinamool Congress (TMC), would register a clean sweep. However, trends till 11.45 am had the TMC leading in 25 seats and the BJP in 16. By noon, the count showed TMC had won 45 percent of votes, and the BJP a close 40 percent.
“I feel the BJP will spring a big surprise in West Bengal. Both the seat tally and the vote share will increase substantially uniformly across the state,” says Kalyan Choubey, former footballer and BJP candidate from Krishnangar, in Nadia district. He was leading by 5,000 votes till 11 am.   The neighbourhood around Banerjee's residence wore a sombre look, and unlike any other election result day, no crowd or mass gathering could be seen there. Only a small group was spotted celebrating in front of Netaji Indoor Stadium in Kolkata. In contrast, BJP offices wore a festive mood. Celebrations were already underway at the the party’s state headquarters on Central Avenue in Kolkata. Most senior leaders were inside, glued to the television, monitoring the developments closely. But that did not deter party workers from already celebrating what they said would be a historic win. “This has never happened in West Bengal. This will be the best result ever, but more is in store. This is the stepping stone to wresting power in the state,” says Kamlesh Pandey, a BJP worker in Jorasanko. Taking a swipe at Banerjee's 42/42 claim, singer and BJP candidate from Asansol, Babul Supriyo, says, “TMC thought the public is a fool. Now they [TMC] look like big fools.” In Asansol, Supriyo was facing fellow celebrity, actor Moon Moon Sen of the TMC. By noon, Supriyo was leading by about 60,000 votes. With his win almost locked, he was upbeat and exuding confience. Responding to the counting trends, Sen told TV cameras with a subtle smile, "Amar ebar ektu bhoy korche (I am now a bit scared).” Mita Laha, who works as a domestic help in the city, says, “Power had spoilt the TMC people in our area. For every silly reason, they would pick up violent clashes with the villagers, they became fearless, the audacity reached some other level. I live with my handicapped husband and three small children. When my land was illegally captured by TMC patrons, BJP helped me out and that is why I want them to come in power.” The results show that the BJP is getting stronger in the state. Case in point: Political newbie Arjun Singh, a BJP candidate, is giving neck-to-neck competition to TMC veteran Dinesh Tribedi. Left front left out
West Bengal was once identified with a single political colour—red. However, counting trends till noon did not show a single seat going to the Left front. "Many Left party workers from our village switched allegiance to the BJP in 2016-17. Left supporters and TMC supporters would never gel, and the Left soon became a toothless party in the state. We hardly had a say. I have seen many Left loyalists change sides, and I can't blame them for it,” says Manisur Rahman, a Left front leader from Medinipur. BJP Rajya Sabha member Roopa Ganguly says, “It is not only about red turning into saffron. Left supporters are considered with high regard. They have an understanding of the situation. When they decide to shift their vote, they give it a good thought. It is well known to all of us now, Modi is the only person who can help our country function in a democratic manner, not like an arbitrary leader like Mamata Banerjee.” Kolkata remained tense throughout Wednesday, a day before counting, with many anticipating violence on Thursday. The administration deployed 10,000 police personnel in and around counting centres in the city. Several companies of the central forces have also been deployed inside and outside the counting centres. “West Bengal, which has a reputation of post-poll violence, becomes particularly volatile when there is a shift in power from one political party to another. Keeping that in mind, we have taken all possible precautions. Entry of victory processions has been barred near counting centres,” says a senior police officer.
(The author is a Kolkata-based freelance writer and a member of 101Reporters.com, a pan-India network of grassroots reporters)