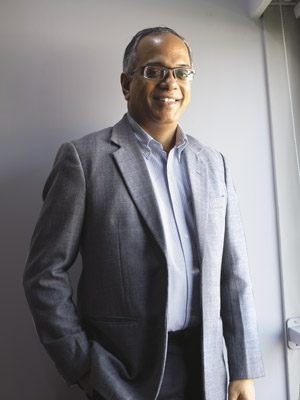 Q. You came on board a family-run organisation that was moving towards a professional structure. Was it challenging?
I would not say [it was] challenging. I would say my biggest enabler is Ranjan [Pai]. His ability as promoter was to actually allow the professional management team—myself as CEO and the management team that was brought on board—to execute the vision and therefore become accountable.

The family promoter should have the wisdom and the sagacity to leave the team alone and make them accountable for what has to be delivered. That is Ranjan’s strength, which I think he gets from his father; to be able to pick the right people, trust them, and allow them to perform.

Q. You moved from the information technology (IT) sector to the education sector. What are the key differences?
The IT sector is characterised by many different things: Terrific pace, rapid changes in technology and the resultant effect in the market place; both on businesses and consumer behaviour. It is very returns-centric. When I moved into the [education] sector, it was more of a personal choice, but I recognised three or four things: It is highly regulated; the governmental interference—well-meaning or otherwise—is extraordinarily high, to the extent that I believe it’s been more inimical than facilitative. Their intentions, are honourable. I’m not questioning the intentions; I’m saying sometimes intentions can be honourable, but execution can result in what the state is today. And [the state] is strangulated. You thought that Licence Raj is dead, think again. It’s very much alive in education.

Q. What are your thoughts on private equity (PE) in India and the way they view education?
Whoever is investing in the education sector should first get their time horizons right. This is more an eight-to-10-year play rather than three-to-four-year play. Second, substantiveness of success is based on outcome; the outcome for a training institution for skills development is the number of jobs created by the institution. I would urge them to focus on this a lot more. The business management should be committed to the larger picture that is crucial to success. If all managers think like PEs, the company is not going to be successful.

Tweets by @forbes_india
Part 2: Coca-Cola's Atul Singh is betting big on India’s urbanisation and consumption
Letter From The Editor: Surviving the Perfect Storm