Letter From The Editor: Surviving the Perfect Storm

Ironically, For me, the biggest lesson was that if you pursue customer-centricity too hard, as the Flipkart's Bansals did, it could well be life-threatening

In the last edition, I had raised the issue of how we, as a nation, need to nurture many more first-generation entrepreneurs. There is an absolute dearth of such role models in India. Which is why Flipkart, founded by two friends from IIT-D—Sachin and Binny Bansal—is the poster-boy of India’s internet economy. With the exception of makemytrip.com, there aren’t too many new entrepreneurial ventures in the last 10 years that have created—or are even likely to create—billion-dollar enterprises. Anyone who has ordered music or bought books from their site even once would testify to just how nifty their service is. And it would be fair to say that they’d be amongst the most popular online brands in the country. 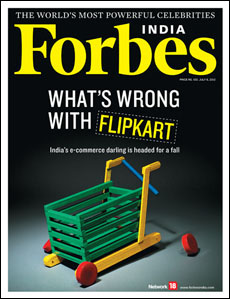 So why on earth do we have a cover that seems to suggest that things aren’t exactly hunky-dory inside Flipkart? Simply because that’s the way things really are. We’ve studied Flipkart for weeks, spoken to scores of people—inside and outside the firm—and vetted our hypothesis carefully to bring you a dramatic story that is bound to give you a whole new perspective on one of India’s best known online firms.

Of course, the chances are that the story could run smack into the popular—and almost romantic—perception of entrepreneurship that Flipkart represents. We’ve tried not to fall prey to that temptation.

In 2009, before we did our cover story on SKS exposing the deep fault-lines inside, it was seen as the role model for a scalable microfinance company that could help eradicate poverty. A few months later, SKS found itself engulfed in a perfect storm that it still hasn’t gotten out of.

So what’s eating Flipkart? I’d much rather that you read my colleague Rohin Dharmakumar’s story for answers. There are many lessons in starting up nestled in there.

Ironically, for me, the biggest lesson was that if you pursue customer-centricity too hard, as the Bansals did, it could well be life-threatening.  Give it a thought when you turn to page 38.