Financial Inclusion Models from Around the World 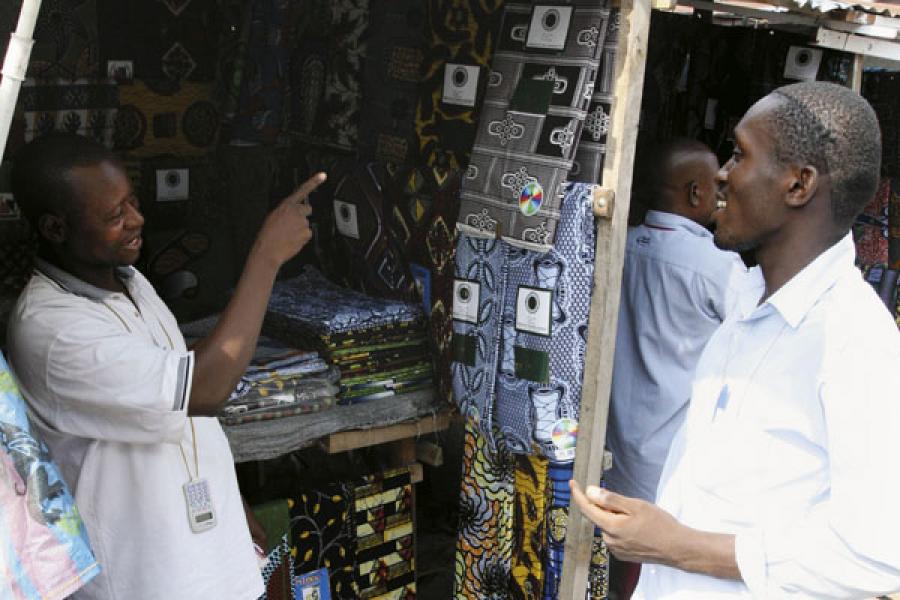 Image: Reuters
NEW GROUND A micro loans officer (right) with a potential customer in kinshasa, DR Congo. Microfinance is a force unstoppable even by civil war

The Context: South Africa is one of the most expensive banking markets and the poor can’t afford it. The central bank asked a collective of five banks to launch a ‘no-frill’ bank account scheme. Launched in 2004, the Mzansi account has no monthly fees. Five transactions in a month are free.

The Experience: According to a 2009 report by the non-profit FinMark Trust, there are 6 million Mzansi accounts in a country of 32 million. Some sections of the informal economy, such as employers paying salaries in cash, have come into the banking system thanks to Mzansi.

But all is not rosy. Only 3.5 million out of the 6 million accounts are active. That is a usage rate of only 58 percent. “Such accounts have been largely marketed as a pure savings product but what drives usage is transaction — transfer of money, payment of bills etc.,” says Ignacio Mas, deputy director, financial services for the poor discipline at the Bill & Melinda Gates Foundation.

The banks have kept further transactions quite expensive. “Once you exhaust the first five transactions which are free, the Mzansi is one of the most expensive accounts in the world,” says Jennifer Isern, South Asia head of the access to finance division of IFC.

The Relevance: India has an even more dismal record with its no-frill account plan. It did manage to get 25 million people to sign up for such accounts from various banks, but today only 2.77 million of them, or a mere 11 percent, are active. The scheme will begin to work better when more friendly avenues of banking such as kiosks and mobile phones reach a large number of people. Also, the country should encourage a transaction-led model.

The Context: Even though BCs had existed in Brazil since the 1970s, the real boost came a little more than a decade ago when the regulation broadened the range of services that can be offered by BCs and eased several other restrictions. The new laws came in the context of very low penetration of banking services in that country. In 1997, as many as 40 million Brazilians out of the total 62 million did not have access to any financial services.

The Experience: Over the last decade, the model has grown rapidly. Brazil’s 150,000 BCs account for about 62 percent of the total number of points of service in the financial system. It is the world’s largest such network. Meanwhile, the total number of bank accounts in Brazil has doubled between 2000 and 2008, from 63.7 million to 125.7 million.

The Relevance: India had tried out pygmy deposit agents in the 1970s but the experience was not good. These agents went about claiming to be bank employees and that led to a lot of disputes and litigation. In fact, RBI Deputy Governor Usha Thorat says Brazil, too, has the same problem.

Now that India is ushering in a BC system, the lessons from Brazil are important. The one reason why the system worked there is that the authorities established a strong business case for BCs. For example, the payment of bills of any kind is required to be done through the banking system using a standard form called Boletos. Bill payments comprise 75 percent of volume (1.6 billion) and 70 percent of value ($105 billion) transacted through Brazilian correspondents in 2008.

But in India, there is a very large informal system for transactions that authorities have failed to bring into the banking system so far. “The question is: Are the big banks and the regulation in India only doing this as a CSR activity or are they trying to develop viable business line? Because unlike Brazil, India has not yet demonstrated a business case for the banks or even the agents,” says Greg Chen of CGAP.


KENYA
Bank Without a Bank: Do away with the need to have a bank account. Use the mobile phone company as a conduit for keeping and transacting money.

The Context: In Kenya, for every bank account, there are two mobile phone connections. And mobile phone use is growing faster than bank account penetration. So, Kenyan authorities ushered in a system where a mobile phone company could act as the repository of customers’ money and allow them to transact. However, it can’t use that money and the customers don’t get any interest.

Safaricom-Vodafone launched M-PESA in 2007 creating this parallel banking ecosystem. The transactions, capped at $500, happen in real time through a wide network of around 17,000 “agents.”

The Experience: M-PESA has grown rapidly to have an estimated client base of around 10 million, roughly 40 percent of Kenya’s adult population. In fact, when the controversial Kenyan Presidential elections of 2007-08 led to widespread protests and the shutdown of formal banking channels, it was M-PESA that most of the country turned to. Since May 2010, Safaricom has ventured into providing deposit facility too by tying up with Equity Bank. The “M-KESHO” savings account, as it is called, too can be accessed from a customer’s mobile phone.

The Relevance: In India, the RBI doesn’t allow mobile phone companies to operate as banking channels. In fact, Safaricom’s virtual monopoly in the business in Kenya makes many independent observers nervous. “Limiting the number of players who are trying to provide financial inclusion seems a bit counter-productive. For a transformative change, we need as much competition as possible,” says Mas.

But there is no reason why India should not allow an M-PESA-like model with plenty of competition. “It will happen if you let some of the creative and entrepreneurial powers in the country to experiment a little bit,” says Chen.

The Context: It was Banco Compartamos—which had begun as a non-profit organisation—that showed that microfinance is a business of scale and that private capital can help achieve that scale. It believes an MFI can succeed only by being extremely profitable for its shareholders. Today, a large number of MFIs, especially in India, are embracing the model.

The Experience: With 1.5 million clients, Compartamos is the largest MFI in Latin America. The company’s interest rates are above 100 percent a year, much worse than the 30 percent levels seen in India. So, its $400-million IPO in 2007 proved controversial. However, nobody disputes Compartamos is where it is today due to the combination of efficiency, innovation and a tight leash on costs. “It is an organisation which has been very efficient at training and managing a very de-centralised base of loan officers. It is fundamentally an HR machine,” says Mas.

The Relevance: The profit-led model is here to stay. However, Compartamos’ success with investors has to do a lot with its 100 percent-plus interest rate. The company charges such rates because loan sharks there charge even more and there is little competition. In India, there are over 1,000 MFIs. Such pricing power will neither be available in India nor tolerated. The long-term success of MFIs rests on being seen as socially helpful. They can’t afford to antagonise the various stakeholders.