We’ve had a below-par monsoon this year and it has taken a heavy toll on agriculture – all forms of agriculture. While normal people are complaining about the rising cost of vegetables, druggies are angry that they have to shell out more for their ‘herbal’ addictions.

We spoke to a few, umm, dealers and they confirmed the news. Hashish prices have increased by 100 percent (a lot of districts in Himachal Pradesh, producer of the famous malana cream have been declared drought hit areas). Magic mushrooms from Kerala are also getting expensive. 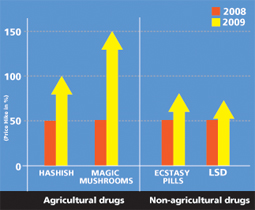 Just to make sure that the prices have risen because of the bad monsoon and not because of increased raids by cops or increased demand, we did a price-check on non-agricultural drugs. Cocaine costs surprisingly have stayed the same over two years. Ecstasy pills and LSD have seen a nominal price hike. Well, at least there’s something positive from the bad rains. While addicts will still need their daily fix, the number of recreational users should drop sharply.