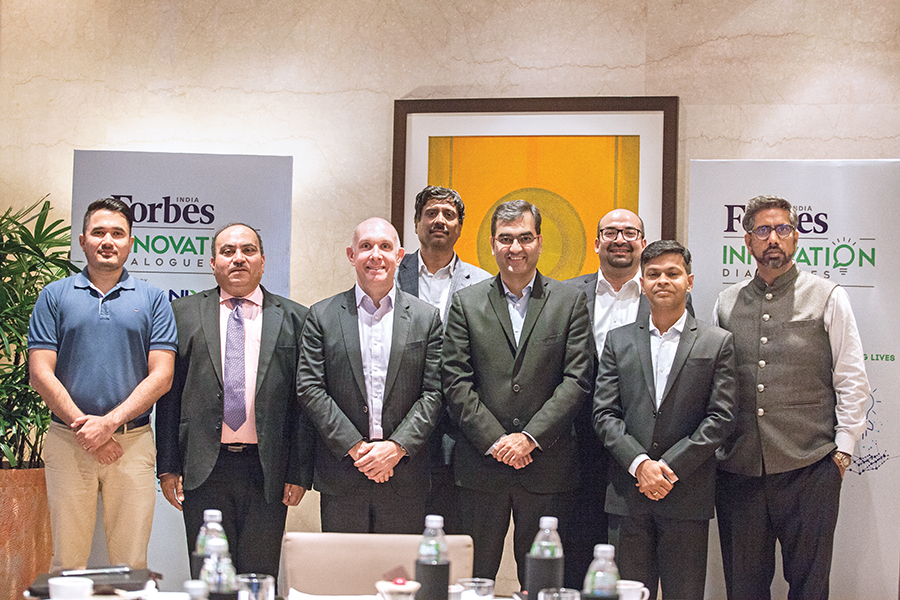 India’s banking and financial sector (BFSI) has been amongst the early adaptors of innovation, whether it be voice authentication for phone banking, chatbots to improve a customer’s banking experience or machine-learning led algorithms to personalize offers for customers. But there is a need for the sector to build on its investments, data security and strategy for growth using the mix of Artificial Intelligence-Machine learning (AI-ML), Internet of Things (IoT) and Cloud technology. This is why Forbes India met industry experts in May at the Innovations Dialogue series “From Sci-Fi to Reality”, powered by Nutanix, to discuss the journey of these technologies in India and challenges ahead.
The panelists included Ekhlaque Bari, EVP, CTO, Fullerton India; Shiv Kumar Bhasin, CTO, National Stock Exchange of India, Ramesh Lakshminarayanan, CIO CRISIL, Gururaj Rao, CIO and Business Leader, BFSI, Mahindra Finance, Dinesh Gangwani, CIO, Financial Services, Piramal Capital & Housing Finance, Dipesh Karki, co-founder & CTO, LenDenClub and Amit Khanna, CIO of WNS India, alongside Neville Vincent, VP (ASEAN, India and ANZ), Nutanix.

The challenge of using AI
Considering that banks in India have always been keen to improve their customer engagement model and boost productivity, innovation was always on their minds. This includes using technologies such as AI and Cloud.  A Microsoft-IDC report in May said that Artificial Intelligence (AI) is expected to more than double the rate of innovation and employee productivity in India by 2021. The study surveyed 200 business leaders and 202 workers in the country. But the reality is also that only one-third of organisations in India have embarked on their AI journey. Vincent from Nutanix had said earlier that the hybrid cloud workflow in India would more than triple to 43 percent from 13 percent today. The future is not Cloud, but managing Cloud. This then will be the biggest challenge that Indian companies will face. “AI is one of the buzz words of the day but I’m not actually seeing a huge demand where companies budget for AI. So I still think it is some early days,” he told speakers. Lakshminarayanan from Crisil, who has experience in selling machine learning solutions online, said: “I don’t think the situation is that corporates are not ready to adopt AI…I think that there is lot of work which is taking place, but this is in drips. But project –related is kind of Tsunami, so there is a fundamental difference between the hype and what the country has done… and that is okay.” One of the biggest deficiencies I see in today's good machine learning base solution is the lack of domain depth in constructing those solutions. Companies are, simply, trying to put data scientists and technologists together and assume that a solution will come about. But that is not going to happen.” Gangwani of Piramal Capital & Housing Finance said companies have yet to fully challenge themselves using such technologies. “Suppose there is a debt-laden company and if machine learning can actually help to reduce your debt then nothing like it. Nobody has gone to that level, right now most are just solving those individual-used cases.” Thus as India moves towards the next wave of technologies, we will have to see if AI lives up to the hype. Bari of Fullerton India said,” I believe AI is as permissive as personal computers were in the 1990, internet in the 2000s, and mobile and cloud that did happen in the 2009-2010.”
“What is common across all those these technology waves is that there will be a time when these technologies – as PCs and internet in the past – they will actually change the world. AI is one of those that will live up to the hype”.

Who drives technology: CTO, CIO or CFO
In recent years companies, and particularly those such as software-as-a-service (SaaS) companies have seen situations where the CTO and CFO of the company have to work together to drive business decisions. Rao of Mahindra Finance says, “In this VUCA world no manual intelligence would be able to cover all the risk factors. You do need additional supplements like an AI tool to gather all this and make sense out of it.” According to Rao, “No CFO will try to ignore what the CTO recommends.” Sometimes decision making is faster for startups – such as P2P lending firm LenDenClub – rather than larger companies. “We are just growing, so we are not following any other company and can adopt or experiment with any technology,” says Karki from LenDenClub. “The problem with more established organisations is they are change resistant. Nokia comes to mind as a classic example here: of failing to adopt the touch technology to mobiles when it came and were resistant to change or bringing in features for the end user. In many organizations, Bari from Fullerton said, that there are moderately enthusiastic people or the manager, CEO or the CFO who are excited about the particular business area, which is dollar driven. This often leads to a planned decision. WNS India, has not just for IT related, but also in its rick management and HR departments, implemented some processes which can add value to the organization. When an employee resigns, he gets into the red zone…so the bots will identify if he actually used a USB or sent out a mail to a domain outside of WNS which is in line with risk and security policies. From the CIO perspective, if you do certain programs which give comfort to the organisation, the risk can be dealt with and then the business objectives can be met, said Khanna of WNS.

The cloud security issue and the future
Cloud has three structures – infrastructure as a service (IaaS), platform as a service (PaaS), and software as a service (SaaS). But even as Indian companies adapt to newer technologies, there will be several threats which will go uninvestigated and risks for companies to cope with. India in recent years has been plagued with data security issues (some of which were cloud related). This has emerged as a real concern which will need to be addressed better, experts said. Says Khanna of WNS India, “Security is one of the biggest concerns it was always there but whenever something comes in the media, everybody stakes waking up. CASB is around for a while but now people are taking about it more".
The experts then spoke about the challenges the industry and their companies faced. For the startup LenDenClub, it will more of managing technology offline and addressing the other compliances when you go online. Bari of Fullerton said that while security of cloud will always remain a challenge for all industries to cope with, predictability of cost will also be a big challenge. Bhasin from the NSE, spoke about how the exchange was adopting to new technologies. “So we're building for non-trade applications, of how to reduce the latencies and having on times at very, very cutting edge label. So there we have gone for enterprise applications and the post trade applications. We would try to leverage cloud for going for a server less and micro services oriented architecture and again a docker based, container based deployment.” Bhasin added that the exchange will leverage the various cloud libraries as well as the private cloud which we're building. It is currently hosting a value added services on its raw data on Amazon. The discussion brought out the elements that while AI-ML will continue to be adopted quickly in the BFSI space, it would become an even quicker decision when proper revenue-driven objectives were discussed. Most corporates have started to adopt a hybrid model for storage of their cloud-related data, but continue to be concerned of how to deal with security issues. This will be a segment which companies will need to take a constant call on, as they continue on their path of development. Thus, as with ecommerce and pure technology firms, the BFSI sector will also have to take technological decisions faster, to ensure that they are not the disrupted.