A year after 13 protesters were killed, much remains to be addressed around Sterlite Copper's Thoothukudi plant 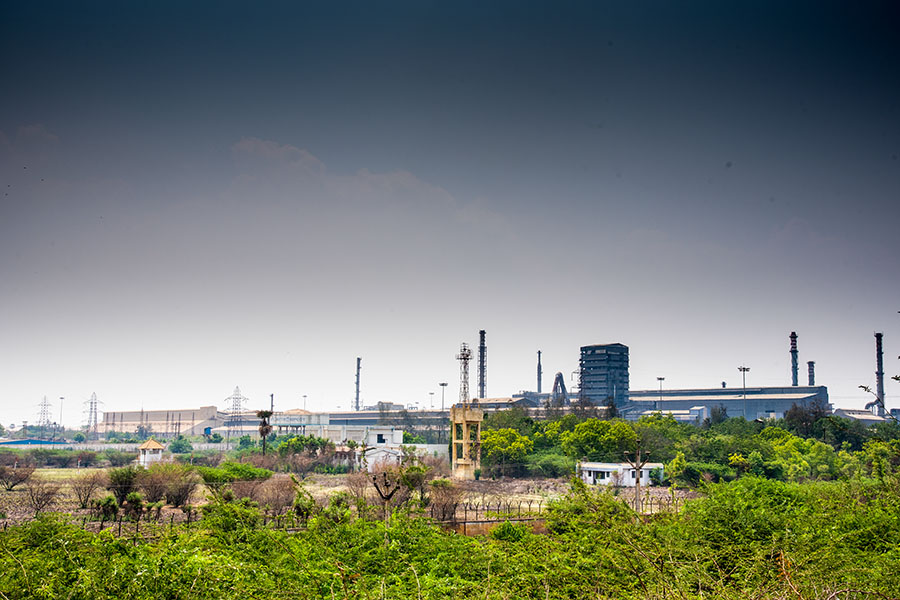 On May 22, the Sahaya Matha Church in Thoothukudi’s Lions Town is crowded with people attending the afternoon mass. They sit silently for over two hours, paying homage to a feisty 17-year-old local girl, who was known to help those in need and aspired to be a lawyer. Exactly a year ago, J Snowlin’s life was cut short by a bullet that pierced through the back of her neck, damaging her upper spinal cord before exiting through her mouth.

Snowlin was among the 20,000-odd people protesting, over 100 days, against the expansion of the Sterlite Copper plant, one of India’s largest copper producers. The company, which is controlled by Vedanta Ltd, a majority-owned subsidiary of the London-listed metals and mining company Vedanta Resources, planned to double the capacity of its smelters, from its current 400,000 metric tonnes of annual copper production. This sparked outrage among the people of Thoothukudi (also known as Tuticorin), a port town about 600 km from Chennai. They said the existing smelters had contaminated their air and water, causing a range of ailments, from respiratory disorders to cancer.

On May 22, 2018, after some of the protesters gathered outside the district collector’s office hurled stones at policemen, a plainclothes officer opened fire, killing 13 people, including Snowlin, and injuring at least 50. Snowlin was the youngest victim. The incident, referred to as one of the most violent environmental protests in India in a decade, was condemned by human rights experts at the United Nations as an “apparent excessive and disproportionate use of lethal force by police”. Days after the violence, the Madras High Court stayed the plant’s expansion and insisted on public consultation. This was followed by the closure of the plant, as the company’s application for renewal of Consent to Operate (CTO) was not approved by the Tamil Nadu Pollution Control Board.

Since then, the issue has attracted political attention. Dravida Munnetra Kazhagam (DMK) President MK Stalin has criticised the ruling All India Anna Dravida Munnetra Kazhagam (AIADMK) state government (a BJP ally) and the Centre for supporting Sterlite. Stalin promised the “permanent closure” of the plant if his party comes to power. At the time of the incident, actor-turned-politician Kamal Haasan also joined the anti-Sterlite protests, while Congress President Rahul Gandhi called the violence “state-sponsored terrorism”.

Sterlite CEO Pankaj Kumar says the company hopes to re-start operations in a “couple of months”, with the next hearing at the Madras High Court on June 11, and hopes that the “political drama of the case will die down and the case will be heard in the right spirit”.

For families of victims, reopening of the plant would mean a longer road to justice. Snowlin’s mother Vanitha, who also participated in the protests last year, says that by just hoping to shut her up with a ₹20-lakh compensation, the government has yet again chosen industry over human rights. “They [the state] continue to monitor me closely, but I am not afraid and will continue to fight for my only daughter, and for people whose lives are at risk because of the pollution caused by Sterlite,” she says. 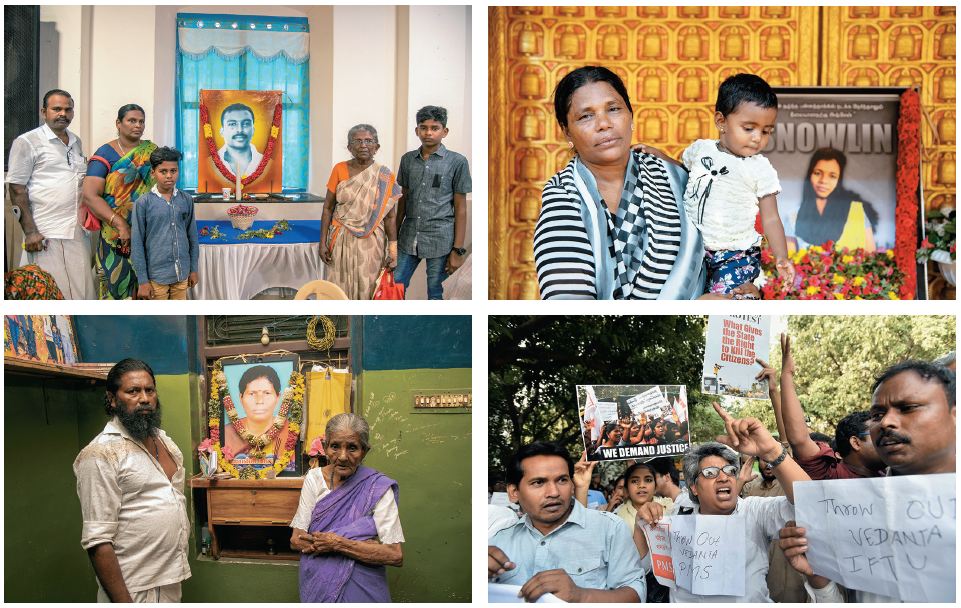 (Clockwise from top left): Family members of Bharath, who died during anti-Sterlite protests, demand the government take action; Vanitha at the memorial service of her daughter J Snowlin, the youngest victim of the police firing; the protests in Thoothukudi sparked similar opposition for Vedanta and Sterlte across the country; family members of Jhansi, a victim of the police firing, say that the State must address their fight for justice
Image: Family members: Juno Franklin for Forbes India; Protest: Anushree Fadnavis / Hindustan Times Via Getty Images

Not too far, in the Therespuram locality, Jesubalan, a fisherman, has arranged a community lunch in memory of his wife Jhansi, 47, who was also killed in the protest. “She was returning home after visiting our daughter, when she was shot in the head,” he says. Ever since, Jesubalan has lost the will to even work. “My wife did not participate in the Sterlite protest that day, but lost her life. They say pollutants from the factory released into the water have killed fish, and with it, livelihoods. The government must take action.”

Murky history
Sterlite’s ₹1,300-odd crore copper smelter in Thoothukudi has been mired in controversies ever since former Tamil Nadu Chief Minister J Jayalalithaa laid its foundation stone in 1994. Environmentalists opposed it, saying the smelter was close (14 km) to the eco-sensitive Gulf of Mannar and did not maintain the 25 km distance mandated by environmental laws.

In November 1998, a report by the National Environmental Engineering Research Institute, commissioned by the Madras High Court, found that gas leaks from the plant caused ailments among locals, while released chemicals—including arsenic, lead, and selenium—contaminated groundwater. The plant was shut, but only briefly. The next year, it got permission to double its production to 70,000 tonnes per year.

In 2008, a study by the Tirunelveli Medical College highlighted how iron content in the groundwater near the plant was 17 to 20 times higher than permissible levels, long-term exposure to which could result in joint and abdominal pains. Respiratory diseases were 13.9 percent more prevalent around the factory, while cases of asthmatic bronchitis was at 2.8 percent, higher than the state’s average of 1.29 percent. In September 2010, the High Court ordered its closure for violation of environmental norms, which was stayed by the Supreme Court. In April 2013, the Supreme Court overturned the High Court directive, and imposed a fine of ₹100 crore on the company for flouting green norms. The company had seen about 27 industrial accidents and gas leaks between 1997 and 2013.

Finally, in February 2018, a fresh round of community protests erupted when the company wanted to double its production capacity, culminating in the police firing and the closure of the plant.

CEO Kumar admits to the company’s environmental lapses before 2013, but insists they have been fully compliant since. He says the company is being unfairly targeted because it is a big player, and that they will work harder on community engagement. “There are many industries in Thoothukudi operating even without a CTO letter from the pollution control board. We are the only ones to obtain that. Of course, our responsibility is more than others and we cannot really compare with them,” he says. Kumar further explains that the unit has invested over ₹500 crore under environment improvement measures. “The company has planned [community investment] projects worth ₹100 crore, of which ₹10 crore is for the supply of clean drinking water and another ₹10 crore for the development of plantations.” The rest is to be invested in schools, primary and secondary health care centres.

While Vedanta had told the Supreme Court that it was suffering a daily loss of ₹5 crore since the closure of the Sterlite plant, Kumar says their cumulative loss in the last one year was $400 million (approximately ₹2,661 crore as per current conversion rates). He adds that India’s copper imports have increased from 215 kilotonne in 2017-18 to 299 kilotonne, up 39 percent year-on-year, after the plant shut down. “If the shutdown continues, imports shall increase by about 76 percent in 2019-20,” he says, adding that Sterlite’s market share has fallen from 40 percent to 10 percent in 2018. 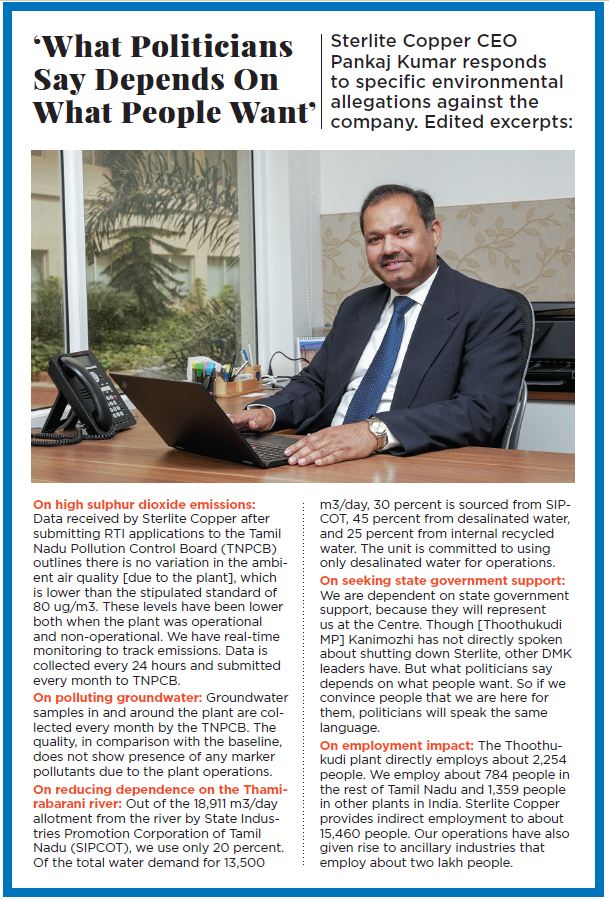 Clean-up act
“The right to environment and health is constitutionally guaranteed, and no one can bypass or shortchange citizens on that. Sterlite has violated the law on multiple counts, and unless the environment of Thoothukudi is restored to its original quality, there is no question of continuing with a polluting factory,” says environmentalist Shweta Narayan. Referring to how Sterlite believes it can continue with business after paying fines, she says, “Regulatory agencies and authorities must recognise that while penalty has been paid for a crime committed, things have to change thereafter.”
Madurai-based human rights organisation People’s Watch, in its report ‘A Year After Thoothukudi Burned’ released this May, criticises the failure of the National Human Rights Commission for dropping its inquiry citing “adequate compensation” was paid to victims. Highlighting that the state has reduced the parameters of justice to just compensation and jobs, the report says no family of the victims was provided post-trauma counselling, and most jobs given were that of a thalayari (village assistant), for which they were over-qualified.

Advocate Henri Tiphagne, executive director, People’s Watch, says that even though there has been political opposition to Sterlite, politicians have often not kept their word. “Vedanta is also facing community backlash for their hydrocarbon extraction project in Tamil Nadu. The state government must take a policy decision on how to deal with such industrial polluters.” Fathima Babu of the Federation of Tamils against Sterlite, promises to mobilise support and ensure that “the company is held accountable”.

At the end of the day, families of victims feel they have to bear the heaviest burdens. An aged Muthumaalai and her daughter Gandhimathi, at the memorial service this May, say they cannot get over the injustice. Muthumaalai’s youngest son Bharath, 36, who was out on parole from another unconnected jail sentencing, was randomly taken into custody by the police during a crackdown following the protests. A few days later, his family was told he had committed suicide. “The postmortem report indicated multiple wounds on his body and just a small line near his neck. The police beat him to death,” says Gandhimathi. “We were planning to get my brother married. We can only hope that people also remember. Remember and keep fighting.”

Tweets by @forbesindia
Forbes India Innovation Dialogues: Making cloud work for you
Worried your employees are slacking? Rethink how you pay them