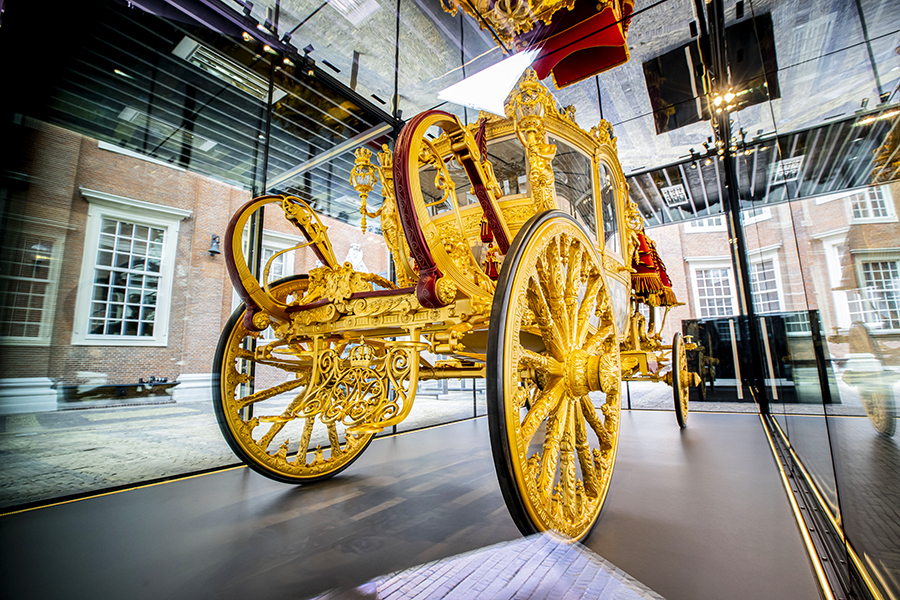 The Golden Coach is on display at the Amsterdam Museum on June 15, 2021 in Amsterdam, Netherlands. The coach has been under restoration since 2015 and is now on display to the public. After the exhibition ends in February 2022, it is uncertain if the Golden Coach will be used in future ceremonies, as there is an ongoing debate regarding the painting on the left panel which depicts images of colonialism. (Photo by Patrick van Katwijk/Getty Images)

On a blustery autumn day in 2015 Dutch King Willem-Alexander and Queen Maxima for the last time stepped out of the golden coach which traditionally transported them to the opening of parliament.

Nearly six years later, the monarch was back on Thursday to unveil a newly-restored carriage—but this time as the centrepiece of an exhibition at the Amsterdam Museum exploring the Netherlands' troubled relationship with its colonial past.

The horse-drawn carriage called the "De Gouden Koets" has been embroiled in a racism controversy over a picture on the left-side panel of the opulent coach, which has undergone an extensive refit.

Called "Tribute of the Colonies", the image depicts kneeling black people handing over produce like cocoa and sugarcane to their white masters—including to a young white woman on a throne representing the Netherlands.

Next to her, a young white man is seen giving a young black boy a book as he is presented by his subservient father, an image which painter Nicolaas van der Waay in 1896 said was meant to portray "civilisation."

Margriet Schavemaker, artistic director of the Amsterdam Museum, said the carriage long used by the Dutch royals for baptisms, marriages and other occasions "has also become an object of controversy."

"In ongoing debates it has become known that one of the panels depicting the Dutch colonial past is making a large group in the Netherlands uncomfortable," Schavemaker told foreign journalists in a recent interview.

Diverging perspectives
The carriage underwent extensive restoration in September 2015 shortly after its last parliament trip, in a day marked by pomp and ceremony when the Dutch royals are traditionally driven through the streets of The Hague.

Last year the government announced that, amid the controversy, its return to ceremonial duties would be postponed following the refit and it would go on show at the museum instead.

The Amsterdam Museum show also comes as the Netherlands faces a reckoning with its history as a colonial and slave-trading power in Asia, the Caribbean and South America, catalysed by the Black Lives Matter movement.

Several other Dutch museums have launched similar projects, including the famed Rijksmuseum which recently opened an exhibit entitled "Slavery".

Running until February, the Amsterdam Museum exhibition is aimed at "creating a show where everybody is welcome and can form their own opinions about the coach," Schavemaker said.

"There must be room for diverging perspectives. People will not agree with one another."

But she pointed out that Amsterdam Museum was "not neutral" and for instance in 2019 officially dropped the use of the term the "Golden Age", the era of Dutch empire-fuelled prosperity in the 16th and 17th century.

Magnificent
The Golden Coach will sit at the centre of the museum in a glass case, surrounded by six rooms.

The first room will be mainly used to display peoples' varying opinions about the coach.

Another room will focus on the coach's origins in the late 19th century, when it was presented to former Queen Wilhelmina as a gift from the people of Amsterdam.

Even then, opinions were already split on whether the Dutch royals should be given such an opulent form of transport.

"Do people not know that such coaches, which a hundred and more years ago suited ideologies of the time, are no longer befitting our time?" the activistic newspaper De Locomotief wrote in 1896.

In modern times, Dutch Prime Minister Mark Rutte has defended the "magnificent" carriage, saying in a comment carried on the museum wall that "rewriting history by defacing the Golden Coach, I'm not in favour of that."

All eyes will now be on King Willem-Alexander to see if he will decide to put it out to pasture and instead choose a less opulent version used in the last few years, made from glass.

The king told public broadcaster NOS last year that the coach was "part of Dutch cultural heritage", but that discrimination in society needed to be tackled.

"I follow the discussion although I'm not taking part in it. Once the coach is restored to its full glory we'll decide what next steps to take," he said.