Inside the synagogues of Mumbai 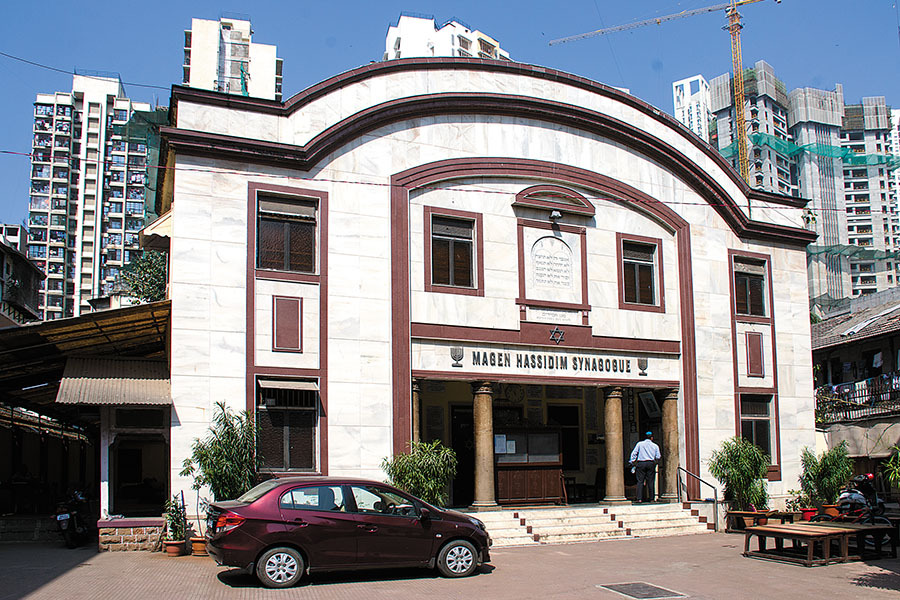 Every day, thousands of Mumbaikars make their way through the Masjid station in the Masjid Bunder area of South Mumbai on the Central and Harbour lines of the city’s local trains, but most are perhaps unaware that Masjid does not refer to a mosque, but the Shaar Harahamim Synagogue. It is located a stone’s throw from the station and is locally referred to as Juni Masjid. Shaar Harahamim Synagogue dates back to 1796 and is the oldest in Mumbai. It can be reached through a network of complex lanes and bylanes from Yusuf Meher Ali Road, on the other side of which another maze of lanes leads to Israel Mohalla, where stands the Share Rason Synagogue, the city’s second-oldest. Both the synagogues are housed in small buildings, with simple prayer halls. Shaar Harahamim (meaning ‘Gate of Mercy’) was built by Samuel Ezekiel Divekar, a Bene Israel Jew. He was part of the Bombay Presidency’s army, which fought Tipu Sultan in the Second Mysore War (1780-84). Divekar was captured by Tipu’s army, and was sentenced to death. He, however, survived because of an intervention by Tipu’s mother when she learnt he was a Jew, who she considered to be ‘God’s chosen people’. While a prisoner, Divekar vowed to build a synagogue in Bombay after his release, and he kept this promise, building Bombay’s first synagogue for the Bene Israel Jewish community. In the 1850s, the old synagogue was demolished to make way for the current larger one. In 1843, a breakaway faction from the management of the Shaar Harahamim Synagogue built the Share Rason Synagogue (meaning ‘Gateway of Will’). This came to be known as the new synagogue, while Shaar Harahamim Synagogue became known as the old synagogue. And so they remain, even after 175 years. These two synagogues are located in a densely populated area with a predominately Muslim population. But unlike in the rest of the world, the two communities have lived here peacefully for centuries. In fact the Jews have been living on the West coast of India for over 1,000 years, without any trace of anti-Semitism. The vast majority of Mumbai’s Jews belong to the Bene Israel community. ‘Bene Israel’ translates to ‘Children of Israel’, and are considered to be descendants of Israel’s lost tribe. According to local Jewish history, they arrived in India in the first or second century CE, as a result of a shipwreck off the Konkan coast. They first settled in the Raigad area of Maharashtra, and although they mixed with the local people, they kept their Jewish traditions alive. In the mid- or late-18th century, the Bene Isreal Jews were joined by the Baghdadi Jews, a flourishing business community from Iran who soon set up successful business operations in Mumbai. In the 1940s, the Jewish population of Mumbai peaked to about 30,000 but with the formation of Israel in 1948, this number declined sharply. Ralphy Jhirad, president and managing trustee of Bene Israel Heritage Museum and Genealogy Research Centre in Mumbai, says, “The number of Jews in Mumbai is about 3,500, and 99 percent belong to the Bene Israel community. There are nine synagogues in Mumbai, with six located in the heart of the city. Four of these belong to the Bene Israel community, while two are of Bagdadi origin.” Jhirad, who conducts Jewish heritage tours in the city, adds, “Most of my guests are of Jewish lineage, and many of them have a Mumbai connect. They come back to retrace their roots. I have identified 72 spots in Mumbai with direct and indirect Jewish connections. They include not only synagogues, but also docks, libraries, museums and many public utility buildings and my centre provides valuable raw material for Jewish researchers from all over the world.” 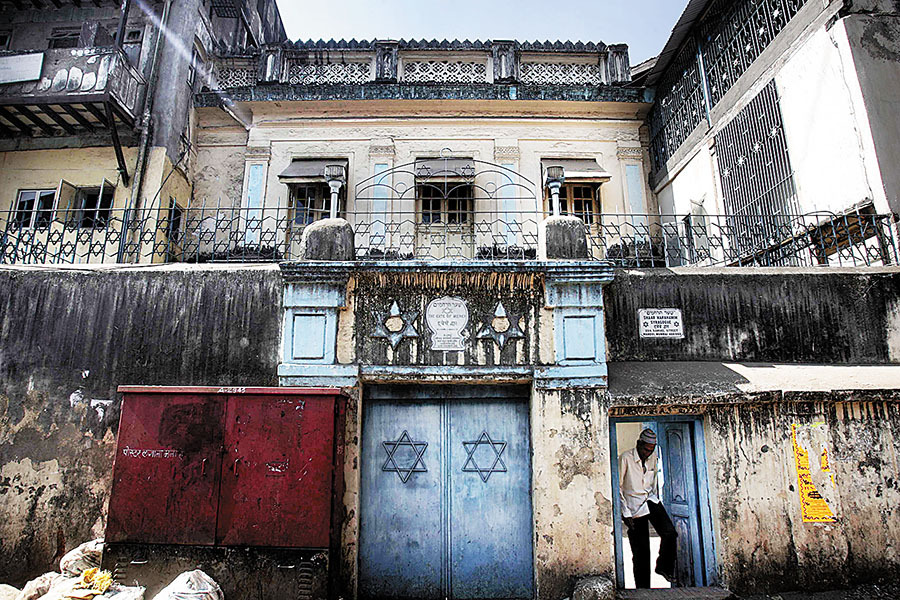 The Shaar Harahamim Synagogue (above) in Masjid Bunder area dates back to 1796 and is the oldest in Mumbai
Image: Kunal Patil/Hindustan Times via Getty Images The Keneseth Eliyahoo Synagogue is the grandest in Mumbai and is located in Kala Ghoda, a hub of culture and heritage. Like the other synagogues in the city, this too is under heavy police protection since the November 2008 terror attacks in Mumbai, during which terrorists attacked Chabad House, a Jewish cultural centre. Because of the blue exterior walls it once had, it is often referred to as the Blue Synagogue of Mumbai. But the synagogue was not originally blue, and following extensive restoration work over 2018-19, it was returned to its original colour of white, with bright indigo boarders. Abha Narain Lambah, the conservationist behind the synagogue’s restoration, says, “As all the old archival photographs were black and white, finding the original colours of the synagogue was not easy. So the paint was removed layer by layer, and it finally led to the determination of the original colours. I collected memories of the synagogue from old Mumbai Jews and this helped me restore the synagogue back to its original state.” The Keneseth Eliyahoo Synagogue dates back to 1884, and was built by Jacob Elias Sassoon and his brothers in memory of their father Elias David Sassoon (Elias is also known as Eliyahoo), who was the son of David Sassoon, a Baghdadi Jew who settled in Bombay in 1832 and was a successful businessman. Inside the synagogue, its western wall has a huge stained glass window with colourful floral motifs. Beneath it is an ark (heckal), which faces Jerusalem; it is a single decorative door that leads to the chamber housing the holy tora scrolls. An elevated ornamental platform, called bimah, stands at the centre. The rabbi leads the service from the platform with the assistance of 10 adult Jew male members. Men and women sit separately in a synagogue; in the Keneseth Eliyahoo Synagogue, the men occupy the lower floor while the women occupy the upper floor balcony that wraps around three sides of the main hall. 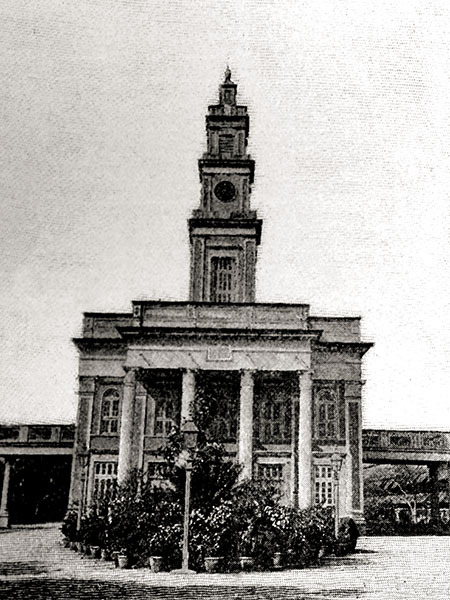 The other Baghdadi synagogue in Mumbai is the Magen David Synagogue, which was built by David Sassoon and predates Keneseth Eliyahoo Synagogue by two decades. With a bright blue facade, enormous frontal columns and a towering clock tower, it stands out amid the congested neighbourhood of Byculla. The two Baghdadi synagogues of Mumbai have striking similarities with their Kolkata counterparts. But they do share their difference. Kamalika Bose, conservation architect and founder, Heritage Synergies India, says, “Synagogues in Mumbai reflect a distinct slant towards European Neoclassical or Baroque Revivalist architectural styles with delicately gilded interiors that use cast iron and have a penchant for painted blue tones. Those in Kolkata, built concurrently, are more eclectic and range from Renaissance Revival to monolithic facades that steer clear of classical orders and incorporate Jewish symbology instead. The interiors are monumental with rows of lofty columns and wrap-around balconies. Both cities showcase the best of Baghdadi Jew patronage.”     The Bagdadi synagogues of Mumbai are all about pomp and splendour—thanks to the affluence of the community members—while the Bene Israel ones are small prayer halls. In spite of the difference in ornamentation, both follow the same structural pattern with a central raised platform and an ark at the western end. Some of the Bene Israel synagogues have a single floor and the women’s section is separated by a waist-high railing. 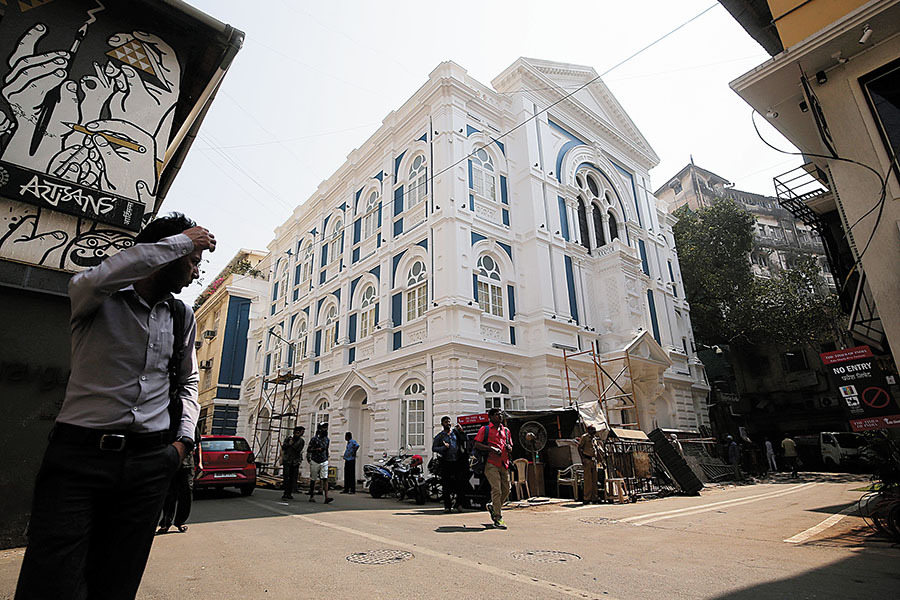 The the recently renovated Keneseth Eliyahoo Synagogue
Image: Francis Mascarenhas/ Reuterrs Magen Hassidim Synagogue (meaning ‘Shield of the Pious’) is the largest Bene Israel synagogue in Mumbai, and is located in Byculla. The original structure dates back to 1904, and it has been operating in the present two-storeyed building since 1934. Tiphereth (or Tifereth) Israel Synagogue (meaning ‘Glory of Israel’) is the community’s fourth synagogue in Mumbai, and is located near Jacob Circle. The original synagogue, which was located in the same area, dated back to 1886, and was shifted to the present location in 1924. 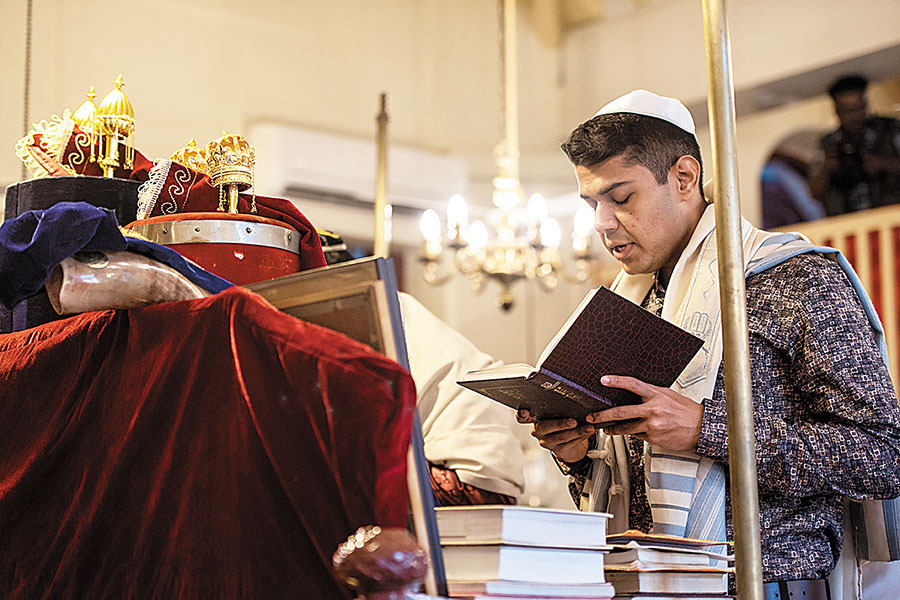 Jews celebrate their New Year—known as Rosh Hashanah—at Shaare Rason Synagogue in Pydhonie, Mumbai
Image: Pratik Chorge/ Hindustan Times via Getty Images However, apart from the Keneseth Eliyahoo Synagogue, the others are rarely visited by tourists. “Even to Mumbaikars, the synagogues are an unknown part of Mumbai. They provide an interesting insight into the socio-ethnic fabric of Mumbai, by focusing on a small community, which has been considered part of Bombay,” says Jhirad.  With a dwindling Jewish community in the city, the synagogues are becoming difficult to maintain, and funds are difficult to come by. Lambah says, “It is difficult to get corporate social responsibility funds for conservation, and when the building is of religious nature, things become even more difficult.”

Tweets by @forbesindia
Judge blocks Trump's ban on foreign workers
News by Numbers: Shocking reality of how often crimes against women are committed