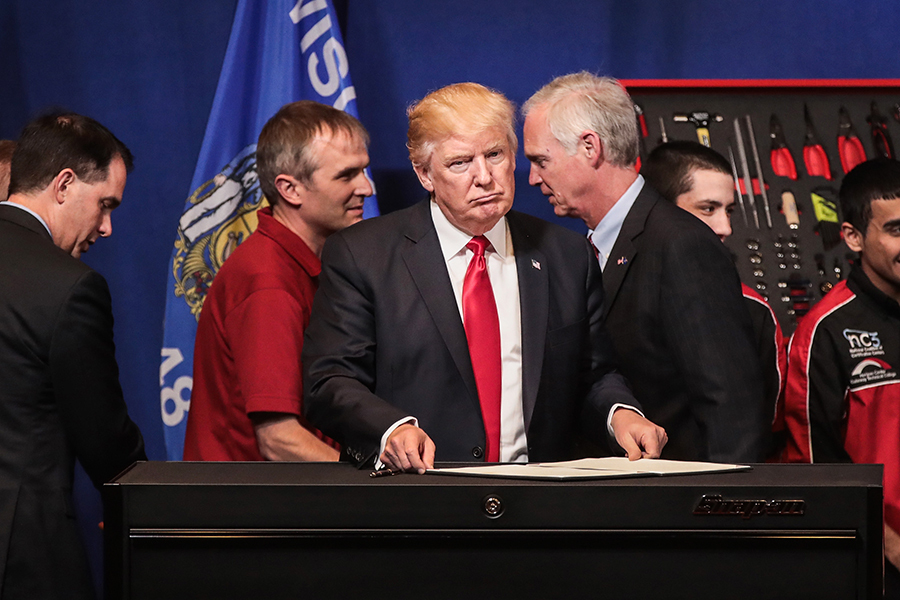 President Donald Trump signs an executive order to try to bring jobs back to American workers and revamp the H-1B visa guest worker program during a visit to the headquarters of tool manufacturer Snap-On on April 18, 2017 in Kenosha, Wisconsin
Image: Scott Olson/Getty Images

LOS ANGELES — A federal judge ruled Thursday that President Donald Trump overstepped his authority in suspending new visas for hundreds of thousands of foreign workers amid the coronavirus pandemic, enabling major companies like Microsoft, Goodyear Tire and Exxon Mobil to resume bringing employees from abroad. Judge Jeffrey S. White of U.S. District Court for the Northern District of California temporarily blocked further implementation of the sweeping order, issued in June, as it applied to thousands of companies seeking to bring workers to the United States on a wide array of visas, including the H-1B for high-skilled workers, seasonal employees on guest-worker visas and others, such as au pairs, who enter the country on cultural exchange visas. “Congress’ delegation of authority in the immigration context does not afford the President unbridled authority to set domestic policy regarding employment of nonimmigrant foreigners,” the judge wrote in his 25-page decision. “Indeed, there must be some measure of constraint on Presidential authority in the domestic sphere in order not to render the executive an entirely monarchical power in the immigration context, an area within clear legislative prerogative,” said White, who was appointed by President George W. Bush. The president had said that his proclamation, initially effective until Dec. 31, would protect Americans from foreign competition for jobs amid soaring unemployment caused by the coronavirus pandemic. In his proclamation, he described the entry of additional workers under work visas as an “unusual threat to the employment of American workers.” The proclamation also restricted the ability of American companies with global operations and international companies with U.S. branches to transfer foreign executives and other employees to the United States for extended stints. And it blocked visas for the spouses of foreigners who are employed at companies in the United States. In a scathing opinion, White said the proclamation did not address the problem it purported to tackle, namely to lift the economy by providing job opportunities for Americans. “The proclamation completely disregards both economic reality and the preexisting statutory framework,” he wrote. “Furthermore, without any consideration of the impact on American firms and their business planning, the proclamation changes the scope of immigration policy in the United States.” The judge’s order is at odds with an earlier decision reached by a federal judge in Washington, D.C., which ensures that the ultimate determination will be made by an appeals court. Still, it immediately sets aside the visa ban for the plaintiffs who brought the case. They include the U.S. Chamber of Commerce, the National Association of Manufacturers, the National Retail Federation and groups representing tech giants like Microsoft and Amazon; their members include hundreds of thousands of American businesses of all sizes from a cross-section of sectors. “We are competing with the rest of the world to find and develop top talent to support innovation in our industry,” said Linda Kelly, a senior vice president and general counsel at the manufacturers’ association. “Today’s decision is a temporary win for manufacturers committed to building that innovation in the United States.” “The restrictions both undermined our industry at a critical time and conflicted with the law,” she said. The judge’s ruling was a lifeline, said Marcie Schneider, the president of Intrax, a cultural-exchange company that brings au pairs to the United States. “This decision means that our staff can continue to do the important work that they do to bring cultural exchange participants on our programs and to remain employed in this vital field,” she said. The administration did not immediately comment on the ruling. Stephen Miller, the White House aide who is the architect of Trump’s immigration policy, has pushed for years to limit or eliminate many foreign worker visas, arguing that they harm employment prospects for Americans. In recent months, Miller has argued that the economic distress caused by the virus has made it even more important to turn off the spigot. While the president’s pledge to build a “big, beautiful wall” to prevent immigrants from swarming the border has garnered the most attention, his moves to slow legal immigration have been ongoing and even more effective. And as the election nears, Trump has doubled down on his commitment to curb immigration of all kinds. This week, the federal government said it would admit 15,000 refugees, an all-time low, during the coming fiscal year. That number is even fewer than the 18,000 refugees authorized for resettlement last year and a sliver of the 110,000 slots approved by President Barack Obama in 2016. In April, Trump signed an executive order that suspended new permanent residence authorization, or green cards, to most foreigners looking to live in the United States. Under another policy that took effect early this year, known as the public-charge rule, immigrants applying for green cards can be disqualified based on their likelihood of using public benefits and their English proficiency. This week, White issued a preliminary injunction blocking a series of fee increases for visas and other immigration benefits that were to go into effect on Friday, saying they would irreparably harm poor immigrants. The United States Citizenship and Immigration Services had planned to increase the cost of naturalization applications to $1,170 from $725 for most applicants; it would have also charged asylum-seekers, who have never paid for refuge, a $50 application fee. The cost of applying for a deportation suspension or expulsion cancellation would have jumped to $1,810 from $285. Most fee waivers for immigrants who are unable to afford paying the full cost would have been eliminated.

Tweets by @forbesindia
Winner, winner, chicken dinner: The incredible growth story of Licious
Inside the synagogues of Mumbai