Save the rhino: How India and South Africa differ in conservation

The two countries' conservations objectives remain the same, but while South Africa dehorns its rhinos to protect them from poachers, this approach is unlikely to be adopted in India 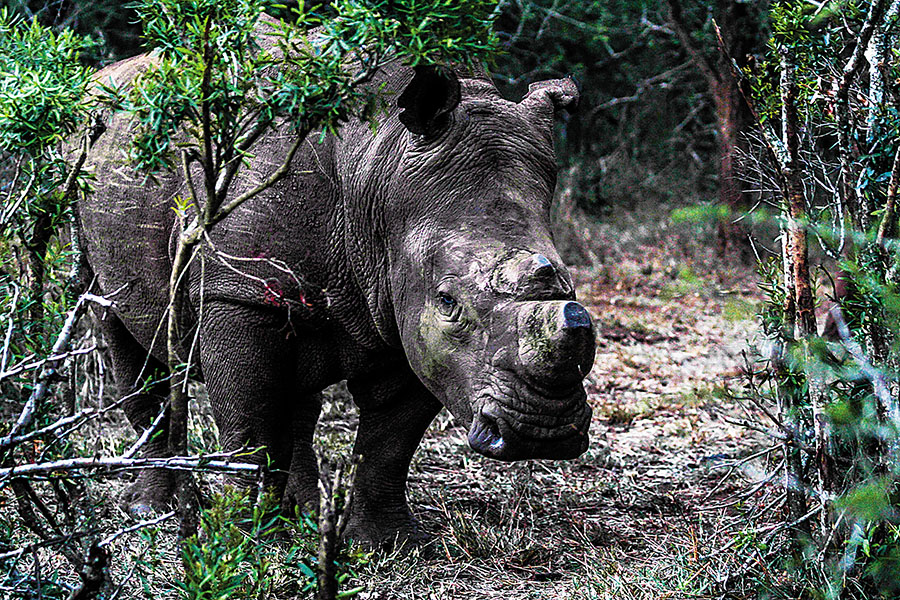 We sat quietly in the open SUV, under a falling dusk that was barely lit by a moon, at the Thanda Private Game Reserve in the KwaZulu-Natal province of South Africa. The large watering hole 100 metres ahead would shortly become a hotspot for wildlife, claimed Buselaphi our ranger. Soon enough, I noticed a large figure lumbering towards the water, followed by two more. As they got close, I saw that they were enormous. But something was missing. “Where are their horns?” I whispered, agitated. “These white rhinos have been dehorned,” replied, Buselaphi, with a straight face. South Africa’s response to rhinoceros poaching—it is home to 20,000 white rhinos and 5,500 black rhinos—is to surgically dehorn the animals, so that they are not of any use to poachers who sell their horns. Home to the two varieties of two-horned rhinos, the African continent has long been struggling to conserve these animals. The near-threatened whites are larger than the blacks, have a square lip and are grazers; the critically endangered black rhinos have a hooked lip and feed on leaves of bushes and trees. Rhinos are one of the Big Five animals that are sought out by tourists, and are also hot targets for poachers. And despite efforts, 728 were killed in 2018, according to the International Rhino Foundation (IRF). 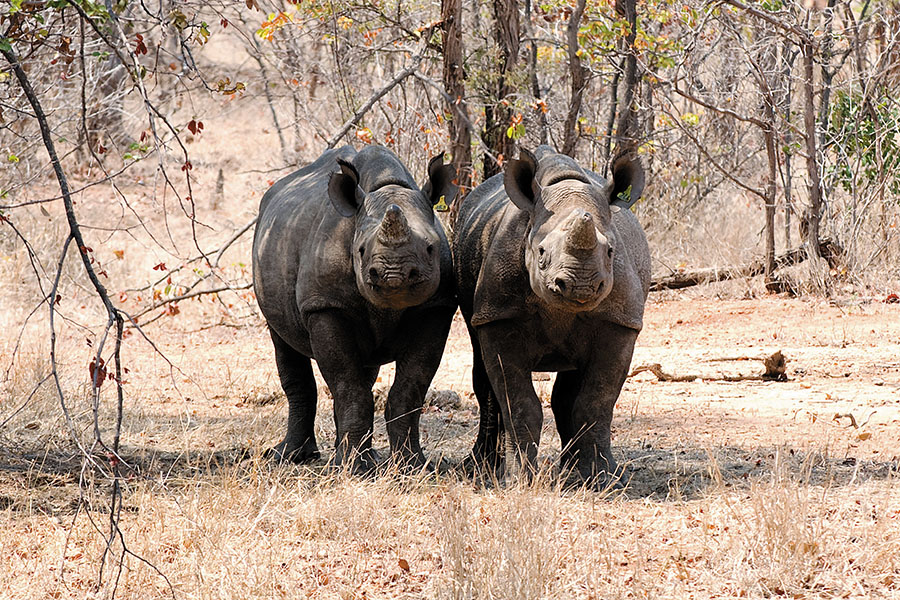 Poachers target the rhinos for their horns, which contain keratin. Once cut, the horn regrows to its full size in a couple of years. These horns are in great demand in the Asian black market, primarily China and Vietnam, for its supposed medicinal and aphrodisiac properties. “They are also regarded as status symbols,” says 61-year-old Dr Dave Cooper, a wildlife veterinarian and specialist in rhinos who works largely for provincial reserves within KwaZulu-Natal. The horn is worth more than its weight in gold in the black market, while lack of evidence, bureaucracy and technicalities makes it difficult to convict arrested poachers. Cooper, winner of the Rhino Conservation award for Best Science, Research & Technology in 2016, is actively involved in rhino immobilisation for activities like dehorning and inserting transmitters to track the animals. The rhinos are darted, preferably from a helicopter. “It takes approximately four minutes for the drug to take effect,” says Cooper. “The opioids used cause severe respiratory depression, and the rhino needs to receive a partial antagonist immediately to reverse the effect. The animal is blindfolded, and the ears plugged to minimise external stimuli. Once dehorning is done, the rhino is given an antidote to the opioids and recovers fully within a minute.” From reaching the immobilised animal, the entire process takes about 15 minutes. Cooper’s job also includes treatment of ‘survivors’ of attempted poaching, and post-mortems on those that were killed. It is heart-wrenching to find rhinos with mutilated eyes, slashed sinews of the hind legs, and axe wounds. “The worst are the cases where we find a ‘survivor’. We find them wandering around with half their faces removed,” he says. “At times we must take the tough call to bring down the rhino as we cannot save it.” It isn’t easy to decide on killing an animal they have spent their life protecting. 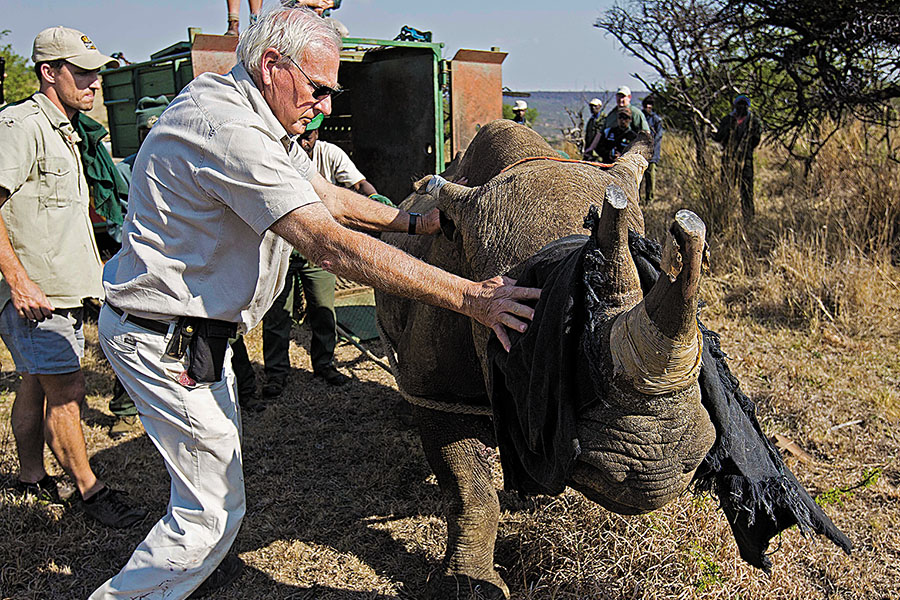 Dehorning, however, is not a universal phenomenon in South Africa. Individual nature reserves may choose to do so, depending on their budget and the number of rhinos they harbour. “We do not dehorn our rhinos,” says Bloomer, a Zimbabwean ranger at the Karkloof Nature Reserve, which covers some 3,000 hectares.  “We have cameras all around the reserve’s perimeter and any trespass leads to our cell phones ringing immediately.” While dehorning has helped save the rhinos in reserves such as the Phinda Private Game Reserve in KwaZulu-Natal, it has also meant that poachers gravitate towards those reserves where the pachyderms haven’t been dehorned. One of the main reasons for all rhinos not being dehorned, is the cost involved. “$50 for drugs and dart, and the helicopter costs are worked out on an hourly basis based on the aircraft type, say $500 to $700,” says Cooper. While northern African countries like Botswana and Swaziland have a zero tolerance towards poachers and shoot-at-sight licences, South Africa does not. Consequently, rhino translocations to neighbouring countries like Swaziland, Zimbabwe, Botswana, Kenya, Namibia, Malawi and Zambia are being carried out from South Africa to protect the animals. “Rhino translocations occur throughout southern Africa, and are done to either move animals out of an area that has a heavy poaching incursion, or to re-introduce them to countries where they once lived,” says CeCe Sieffert, deputy director, IRF. “I have flown over a hundred rhinos to Botswana using a military transport plane,” adds Cooper. Intelligence strategies like early warning systems and community involvement, boots on the ground, intensive monitoring and tracking, specially trained dogs to track poachers, protecting handlers and rangers, detecting weapons, and locating poached rhino horns are other conservation initiatives taken up by organisations like IRF. 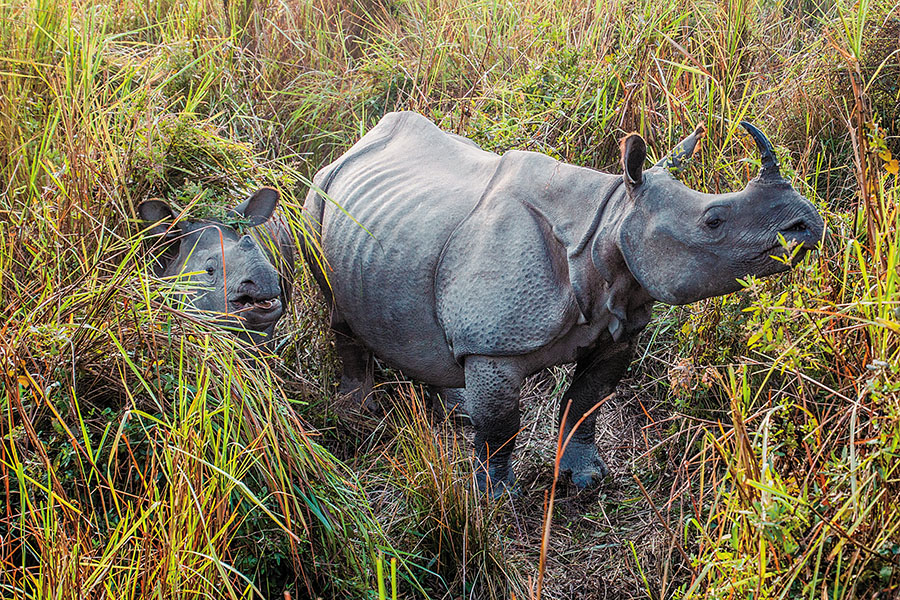 The Kaziranga National Park now has 70 percent of the rhino population in the countr
Image: Shutterstock

Unlike the white ones, black rhinos are solitary creatures and need lots of space, hence their numbers are lower. They were once spread across sub-Saharan Africa, except for the Congo Basin. Hunting by European settlers during the early days and poaching later on brought their count down to 2,475 in 1993. During my stay in South Africa, I couldn’t spot a single black rhino in the wild. Conservation and translocation initiatives can often include private individuals as well. For instance, Dr Jacques Flamand (73) is a wildlife veterinarian who has been working with Worldwide Fund (WWF), spearheading the Black Rhino Range Expansion Project in South Africa with Eastern Cape Parks, SANParks and Ezemvelo KZN Wildlife. 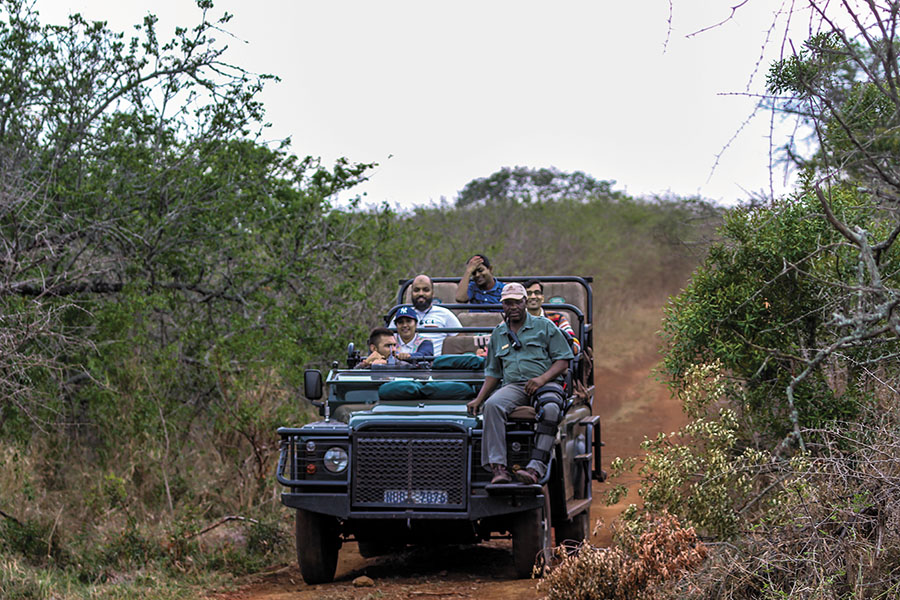 One of the ways in which he finds new habitats for the black rhinos is by talking to private landowners who have large areas suitable enough to house the animal, with adequate security measures, and are ready to invest in their protection. He and his team immobilise the identified rhinos and translocate them to their new homes. In this manner, he has set up 11 new populations of black rhinos within South Africa, thus bringing the count to more than 500 in the KwaZulu-Natal for the first time since colonial times. “With poaching incidents rising, it is increasingly difficult to find passionate people who are ready to invest money in rhinos as it’s a liability to protect them,” adds Flamand.                                                                                                   ***** Rhino conservation is an effort that finds resonance in India, with its population of greater one-horned rhinos, the largest of the species. These pachyderms once walked the entire stretch from the Indus Valley in Pakistan, along the northern India belt bordering southern Nepal, till the borders of Myanmar. Today, their territory has shrunk dramatically and is restricted to 11 protected populations in India and Nepal. According to the IRF, their population had fallen to just 200 in the 20th century, and today stands at about 3,550 in India; they are listed as vulnerable. As of September 2018, seven rhinos were poached in India last year, according to IRF. According to WWF India, 70 percent of the rhino population, 2,413 of them, is concentrated in the Kaziranga National Park in Assam and is vulnerable to diseases, poaching and natural disasters. WWF India, in partnership with IRF and the United States Fish and Wildlife Service has been working towards increasing the rhino count in other habitats within the state, such as Manas National Park (it has 38 rhinos), Bura Chapori Wildlife Sanctuary, Laokhowa Wildlife Sanctuary and Dibru–Saikhowa National Park. This is being done through wild-to-wild translocations from Kaziranga National Park and Pobitora Wildlife Sanctuary. This initiative is part of the Indian Rhino Vision 2020, which was launched in 2005. 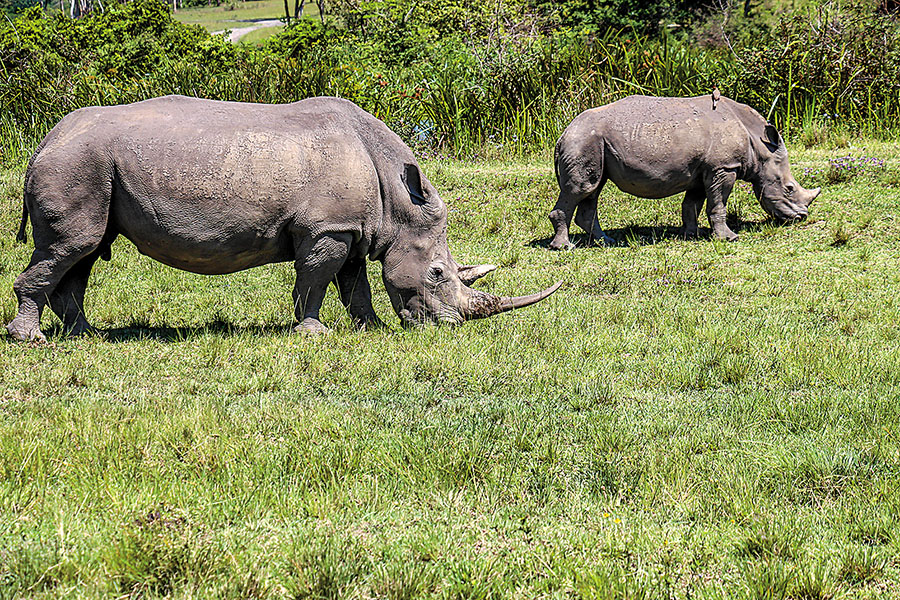 The first rhino translocation in India took place in 1984, when the Government of India introduced two male and three female rhinos from Assam to Dudhwa National Park in Uttar Pradesh. Today there are about 30 rhinos in the park. While South Africa has resorted to dehorning to protect its rhinos, it is not an approach that is likely to be adapted in India. “Our rhinos are found mainly in alluvial flood plains; as such India’s rhino-bearing areas are largely wetlands. This makes it very risky to dart wild animals, as they may drown,” says Dr Bibhab Talukdar, IRF’s Asia co-ordinator. “Ethically, Indian wildlife management is against removing a part of a living animal which has naturally evolved,” says Vivek Menon, executive director and CEO of Wildlife Trust of India (WTI). 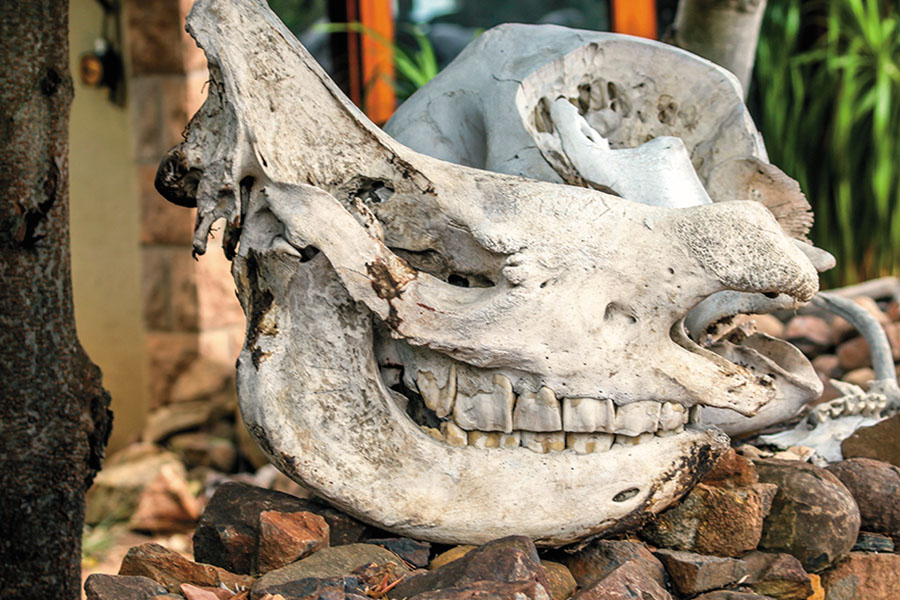 The skull of a rhino at Bongani Game Reserve in Mpumalanga province of South Africa
Image: Rathina Sankari

The organisation has been working towards increasing the rhino count in Manas National Park, a Unesco Natural World Heritage site in Assam, through a project called Bring Rhinos Back to Manas, since 2006. Sadly, the park had lost about 100 rhinos to poachers by 2000. “WTI translocated 18 rhinos and a total of seven calves have been born from the rehabilitated individuals,” says Menon. “Security has been restored in Manas, and no poaching has been reported for quite some years now. Today there are about 38 rhinos in the national park.” 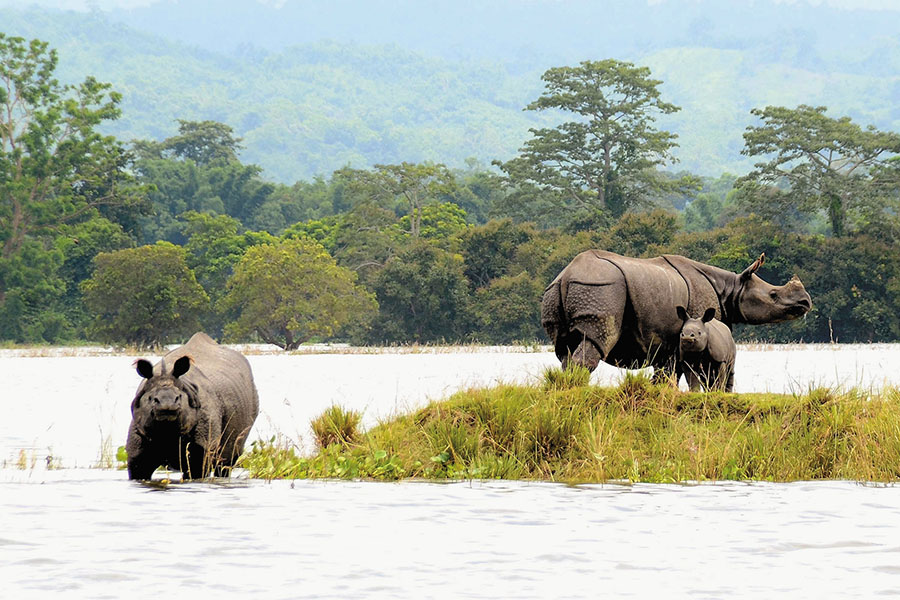 While technological inventions like electronic eye surveillance and night vision have been implemented, Menon believes manual intelligence and patrolling have been the main contributors towards rhino protection. In collaboration with Assam’s state forest department and International Fund for Animal Welfare, WTI runs a state-of-the-art centre to manage orphaned rhinos since 2002. From July, a Special Rhino Protection Force (SRPF) of 82 constables have been deployed across the eight ranges in Kaziranga National Park. Till date, two battalions of the Assam Forest Protection Force—Indian Reserve Batallion and Special Task Force—were responsible for the protection of these animals. “Trained in handling arms, ambush, information-based raid, search and raid operations, the SRPF comes very handy in patrolling disturbed areas like South Kaziranga to protect the rhinos,” says P Sivakumar, director, Kaziranga. Saving the greater one-horned rhino benefits numerous species along the way. Mammals like the swamp deer, hog deer, barasingha, pygmy hog, otter, fishing cat and other wetland birds and reptiles are part of the same ecosystem, and saving the rhino translates to conserving this ecosystem and biodiversity. (The writer was in South Africa on the invitation of South African Tourism)