This collection of Meissen porcelain could break records at auction

Sotheby's will soon auction off a prestigious collection of Meissen porcelain, once owned by the collectors Franz and Margarethe Oppenheimer 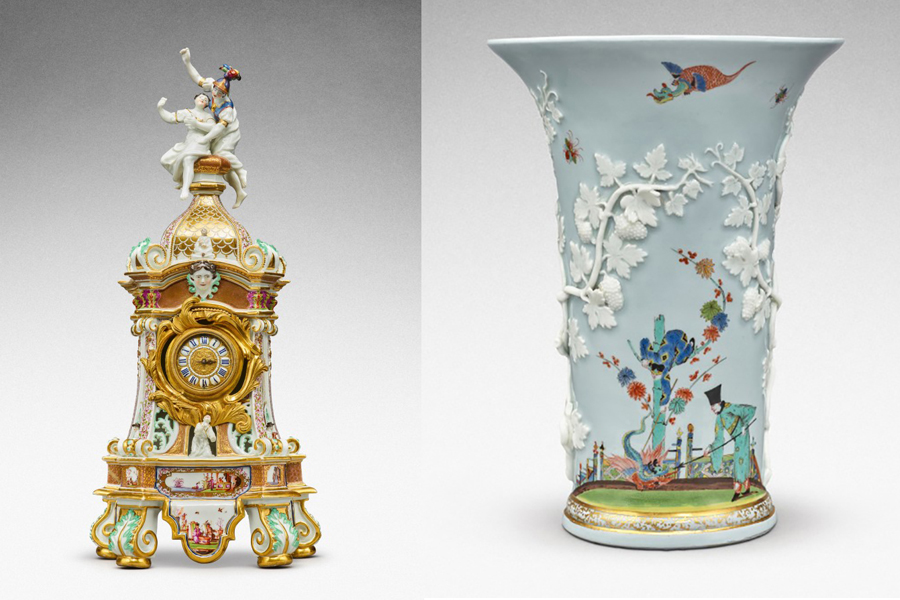 The Oppenheimer porcelain pieces will go under the hammer on September 14 at Sotheby's New York.
Image: Courtesy Sotheby's

An auction lot like this hasn't been seen on the market in the last four decades. Sotheby's will soon auction off a prestigious collection of Meissen porcelain, once owned by the collectors Franz and Margarethe Oppenheimer. The estimate for the collection? Several million dollars.

According to Sotheby's, "one doesn't expect to find such masterpieces for sale in the 21st century." And for good reason: the porcelain collection offered for sale on September 14 is as rare as it is coveted. It was assembled by Berlin collectors Franz and Margarethe Oppenheimer in the late 1920s, when it was possible to acquire certain pieces from the royal collections in Dresden.

Most of the pieces offered at auction at Sotheby's once belonged to Augustus II, former king of Poland and founder of the Royal Porcelain Factory in Meissen, or were diplomatic gifts. Porcelain was developed in China about 2,000 years ago, but its method of manufacture remained a mystery to Europeans until the early 18th century. The chemist Johann Friedrich Böttger discovered the magic formula in 1709, and the Meissen factory was established the following year. It went on to produce some of the finest ceramic objects and sculptures ever seen in the West.

The vases, cups, teapots, bowls and other objects that make up the Oppenheimers' porcelain collection attest to this expertise. "In every collection, there are obvious stars, and the Oppenheimer's is no exception," gallerist Michele Beiny told Bloomberg. "It's one of the great collections to come [to market]—certainly in living memory, or at least in postwar memory."

However, bidding could go higher because of the unusual history of the Oppenheimer porcelain collection. After the Nazis came to power in Berlin, the couple fled to Vienna. They remained there until the annexation of Austria by Nazi Germany, when they moved to New York. While they were able to take some of their collection to the Austrian capital, the exact details of how and when the Oppenheimers parted with their porcelain objects are unclear. The vast majority of them were purchased by the German Jewish banker Fritz Mannheimer, before ending up in the possession of the Nazis upon his death in 1939.

They were sent to the Netherlands at the end of World War II, and some pieces were later transferred to the Rijksmuseum. The Dutch authorities returned them to the Oppenheimer heirs in 2019, following a lengthy restitution process. They will go under the hammer on September 14 in New York, at a major dedicated auction.

Tweets by @forbesindia
Who will be on the next SpaceX mission?
From Alexandria Ocasio-Cortez's political take to Kid Cudi's street style, here's a look at how celebs turned up at Met Gala 2021